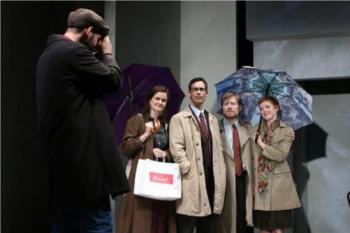 NEW YORK—"Solid" is the word that comes to mind regarding the current revival of Richard Nelson's 1989 work, "Some Americans Abroad."

The play concerns a group of English literature students and their professors on their annual trip to England as they sample the numerous theatrical productions the land of Shakespeare has to offer. While the show is, on the surface, a satire on American tourists trying to see all they can in the short time they are on foreign shores, it's also a much more serious look at the concepts of pseudo-superiority and "ugly Americans."

These elements are clearly present in Joe Taylor (Tom Cavanagh), the new head of the English department. A former liberal (now a cynical realist), he's a man who has made a career of avoiding confrontations and wants things to go as smoothly possible. However that is not going to be the case.

Teacher Henry McNeil (Anthony Rapp) is so desperate to keep his job that he and his wife paid their own way to come on the trip to schmooze. While it quickly becomes clear that his position has been offered to someone else, Joe hems and haws over telling him the complete truth. (Then again Philip is not that eager to hear what is quite obvious to everyone else.) Later on when a student accuses a teacher of making improper advances toward her, Joe is more concerned about the incident simply going away, and he's not above using his own daughter (Cristin Milioti) to help in that regard, regardless of what actually happened.

When Joe is not trying to deal with the various situations that arise on the trip, which also include a missing student; a perhaps somewhat dotty, possibly bigoted, ex-department chairman (John Cunningham); and an affair between two of the staff members (one of whom is married to someone else), he is desperately trying to enjoy the majesty that is England. However, he is constantly stymied by the boorish behavior of Americans—either first-time tourists who are, in Joe's opinion, loud and crude or people who keep coming to England time and again and try to mark it as their own, ruining in, his viewpoint, the feelings of awe, history, and simple beauty of it all.

The joke here is that Joe is one of the worst offenders on both counts. He constantly tries to be something he's not; he watches every penny the department spends—to the point of lunacy—and gets completely worked up when he has to miss a theatrical production, no matter the reason.

Most of the other teachers are no better. Philip is living in a dream world, doing anything that he thinks will allow him to keep his job, despite the fact that the writing is on the wall. Another teacher, Philip (Corey Stoll), is an aging liberal who still believes in fighting the good fight, but his sometime single-mindedness drives Joe to distraction. Meanwhile ex-chairman Orson, while refreshingly blunt, can stand to gain a bit of tact.

Mr. Nelson has crafted a very serviceable script, pointing out a basic truism when it comes to tourists—that often they are too busy rushing from one thing to the next to enjoy what they're actually seeing. The play is also full of numerous backhanded comments, such as when Joe chides Philip's wife (Emily Bergl) in absentia for reading fiction or when Joanne Smith (Halley Feiffer), another transplanted American, complains about the accents of tourists. Theater enthusiasts should get particular enjoyment from the show as many times the characters can't remember a play they've just seen—they've gone to so many it's all become one big blur. Though written nearly 20 years ago, the story remains quite topical and, other than a few lines here and there, doesn't seem at all dated.

Acting is strong throughout. All of the characters, despite being deliberately somewhat stereotypical, come across as fully formed, with empty and meaningless lives—even if they don't realize it. Cavanagh makes a wonderful smarmy and superior department head, a man who will do anything to make sure nothing upsets the status quo. Stoll is good as an aging idealist and a sort of aggressive counterpoint to Tom. Cunningham makes a wonderful ex-leader, so to speak, his retirement allowing him to say truths without fear of reprisal; and Rapp nicely shows the desperation one feels when a job he and his wife desperately need is slipping away. If there's a common thread among them all, it's their unwillingness to face the truth, as shown in situations both comic and serious.

Gordon Edelstein's direction is very good. In particular, he makes the actors play the situations perfectly straight, so much so that none of them can appreciate the irony of their words and actions. The audience, on the other hand, sees a perfect example of tourists and transplants with a holier-than-though attitude—one that gives travelers everywhere a bad name.

Costumes by Jennifer von Mayrhauser are fine as are the sets by Michael Yeargan and lighting by Donald Holder.