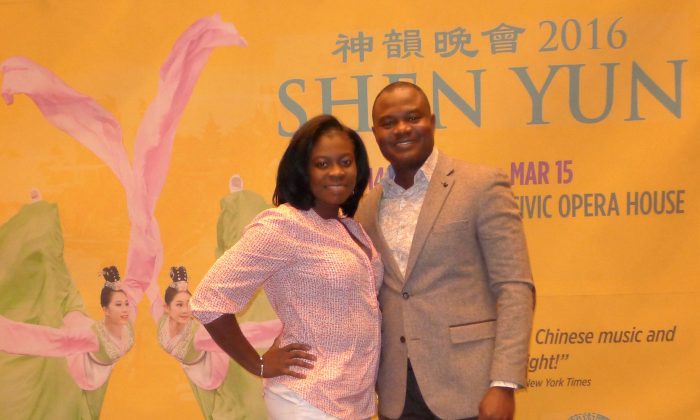 Kenneth Ware, an information technology manager, and his wife Pricilla, a physician, attended the matinee at Rosemont Theater on Feb. 13, 2016. (Maggie Xie/Epoch Times)

ROSEMONT, Ill.—Terrific, fantastic, amazing, and beautiful were the words the Wares used in describing every aspect of Shen Yun Performing Arts as they recounted their experience.

Kenneth Ware, an information technology manager, and his wife Pricilla, a physician, attended the matinee at Rosemont Theater on Feb. 13.

Shen Yun’s goal is to revive the 5,000-year-old culture of the Chinese people that has been lost under modern communist rule, according to the Shen Yun website. They tell the stories through dance, music, and son, and the performance is broken into several segments that showcase a particular regional or folk dance, story, or musical soloist.

But, more than simply telling a story through dance, the performance expresses moral values and virtues that were more common in cultures of the past, but in today’s China are nearly extinct. “I think the virtues here is just hope,” added Mrs. Ware.

The Wares described the endurance of traditions throughout the years, and said that perseverance is a kind of virtue as well. “And also resilience,” Mr. Ware chimed in. “Surely some of the cultures that they try to squash today are still existent. And what they go through today to try to preserve the culture and tradition was very inspiring.”

A ‘beautiful and moving experience’

The perseverance was also inspiring to the Teolises, who attended the same performance.

“The strength of the power of the spirit that cannot be suppressed is evident, both in the story, and in the strength of the dance and the commitment of the people performing; the performers,” said Lynn Teolis, a bookkeeper from the Chicagoland area. “So, I find it’s [a] very beautiful and moving experience. I think the spiritual message is very powerful here.”

Matt Teolis, husband to Mrs. Teolis, who works as a hospital administrator, described the emotive emanations from Shen Yun as very moving, “very beautiful, and very powerful.” He said the performance not only depicted the feelings of those oppressed under modern China’s community rule, but it made the viewer feel a sense of “sameness,” as he put it. That you could somehow relate to these themes despite the vast geographic and cultural difference.

Moreover, Mr. Teolis was rather surprised by the effect of the performance, describing a very deep connection on the emotional level from the dancers.

“I did not expect dance to have that effect on me, to be able to touch my feelings. A very different culture from very far away and over many, many years can make me feel somehow connected to it,” he said.

Many people don’t know the toll the past 60-some years have had on China’s traditions within China. Mr. Ware said that there was a lot to learn from Chinese culture and that “this was something you don’t see in the movies.”