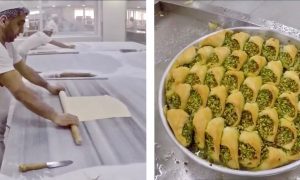 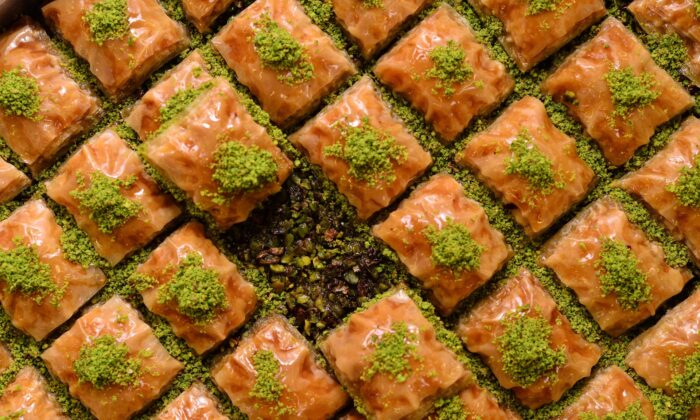 Baklava has found a home in multiple cultures. In Gaziantep, Turkey, the pastry is made with the region's most famous product: pistachios. (Halit Omer/Shutterstock)
Food & Dining

The Sweet, Layered History of Baklava

A search for the flaky, nut-filled, syrup-drenched confection leads to Gaziantep, Turkey, home of—according to some—the best in the world
By Kevin Revolinski
biggersmaller
Print

“Good baklava begins with good soil,” writes Turkish food writer Aylin Oney Tan in her book, “A Taste of Sun and Fire: Gaziantep Cookery.” Probably not your first guess, but for those who take the syrupy, nut-filled, layered-crust confection as seriously as life itself, we need to go right to the basics: good wheat for good flour.

For that, Tan tells us to look to the Harran Plain, an area in southeastern Turkey that was part of the Fertile Crescent, the farmer-friendly land between the Tigris and Euphrates Rivers where wheat was first cultivated over 11,000 years ago. Then, the required clarified butter should be produced from “milk from animals grazing on spring vegetation,” she says. Slightly under-ripe pistachios, “chosen while still on the tree,” bring a stronger, greener color and flavor. Serious business, this.

The word baklava comes to English from Ottoman Turkish, meaning “to tie, wrap, or pile up.” Its deeper roots are uncertain, but likely begin in Turkic tongues in Central Asia. From there, it found its way into Mongolian, Persian (Farsi), Arabic, and Greek.

But the origins of the pastry itself are subject to (sometimes heated) debate.

As early as 800 B.C., the Assyrians placed crushed nuts between heavily honeyed layers of unleavened bread before baking. Ancient Greek and Roman placenta, from the Greek “plakous,” meaning “cake,” may have borrowed from that. A third-century B.C. recipe from Roman historian Cato the Elder, describes a layered cake with sheep’s cheese, bay leaf, and honey stuffed between the circles of dough. A recipe for gastrin from ancient Crete calls not for pastry, but layers of pounded sesame and poppy seeds with black pepper, and a grapes-based sweetener.

Some historians believe the Byzantine Greeks were the ones to develop baklava’s distinguishing paper-thin pastry layers. But Charles Perry, a James Beard Award-winning food writer and historian, traces the pastry dough to nomadic cultures in Central Asia and Anatolia—the westernmost thrust of Asia that makes up most of modern Turkey—and the fillings to Persia. Some of the oldest Persian recipes also indicate that some baklava may have been fried rather than baked, and the filling ranged from nuts and fruits to even lentils. The subject is a historical rabbit hole, to be sure.

The form we see today, made with flaky layers of yufka (or phyllo dough in Greek, from the word for “leaves”) with alternating layers of crushed nuts, likely emerged in its current form in the kitchen of Topkapi, the palace in Istanbul. Each year on the 15th day of Ramadan, the sultan sent baklava as a gift to the Janissaries, his elite guard and the standing army drawn from conscripted Christian boys converted to Islam for service.

The dish has found a home in multiple cultures, and Perry refers to it as an “urban dish” with no specific ethnic claim to its origins. The Greeks incorporate crushed walnuts and honey syrup. The Persians favor adding rose water and raisins, as well as pistachios, or almonds if those aren’t available. Arabs may add cardamom and rose water.

Even France got involved: In the 19th century, the exiled pastry chef of Marie Antoinette found work in the Topkapi kitchen, and after learning to make baklava, created a dome technique, building the layers upside down in a bowl.

On the Baklava Road

In search of good baklava, I set out on a belly-busting trip to Gaziantep, a city with more than eight millennia of storied history, including its role as a major junction on the Silk Road. Gaziantep—or Antep, as most Turks refer to it—is the foodie capital of modern Turkey, and, as I was told by anyone I asked (and several I hadn’t), the home of the best baklava in the world.

I was never overly fond of walnuts, I’d tell them, but Antep’s baklava features the region’s most famous product: pistachios. In fact, the city lends its name to the Turkish term for pistachio: antep fistigi, or “the nut from Antep.” Antep Baklava enjoys a Protected Geographical Indication from the European Commission.

Following a list of recommendations from Tan, I visited baklava bakery Zeki Inal, where I met Bulent Inal, son of Zeki and the fourth generation of baklava makers in his family. He’d been helping his father in the bakery since he was 7 years old. Not only is the method of preparation precise, but so too the method of eating, apparently.

“You eat baklava with all five senses,” he told me, holding up a piece upside down with his fingers. “See, smell, taste, touch, and sound. All senses must experience it.”

Feel its sticky kiss on your fingertips; admire the layered perfection and the golden color, the green bits of pistachio; smell the buttery and sugary goodness; hear the crunch of the layers as they collapse between your teeth; and taste … well, if the taste experience doesn’t cause you to swoon, perhaps the sugar rush will take you.

Baklava here includes a layer of kaymak, a thick, creamy dairy product similar to clotted cream. Ozel baklava, “special baklava,” is made with extra pistachio and a bit less sugar. This was my favorite—still rather sweet, but not so much that my cheeks flushed red.

They also produce kuru baklava, literally “dry baklava.” Bulent explained that back in the day when customers traveling to Istanbul might require a week to get there, the cream element would spoil on such a journey. Kuru baklava leaves that out.

In the age of refrigeration, however, normal baklava can last in the fridge for up to two months, he said. But then the thought of baklava lasting even 10 minutes in my fridge seems highly unlikely.