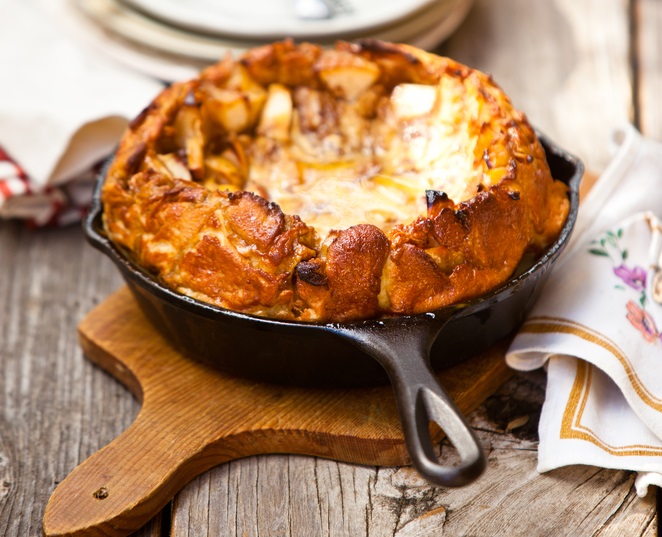 Despite its dramatic presentation, a Dutch baby is one of the easiest breakfast dishes you can make. (LENA GABRILOVICH/Shutterstock)
Food

The Rise of the Dutch Baby

The puffy-edged, custardy-centered pancake is an foolproof favorite at the breakfast table
BY Jennifer McGruther TIMESeptember 16, 2022 PRINT

If ever a breakfast food had a flair for dramatics, it would be the Dutch baby pancake. You pour a thin, eggy batter into a skillet and tuck it into a hot oven. In 10 minutes or so, the pancake bakes, puffs up like a popover, and then falls just about the time it hits the table. It makes for a spectacular brunch dish, and the quick rise-and-fall never fails to delight guests.

The origins of the dish and, specifically, its name are relatively obscure and difficult to pinpoint. Some evidence suggests that it’s an old Pennsylvania Dutch recipe, while others point to a turn-of-the-century café in Seattle. The truth, as is often the case, may lie somewhere in between.

One thing we do know is that a Dutch baby isn’t Dutch at all; rather, it’s German-American. A close cousin of German-style pancakes, such as pfannkuchen and apfelpfannkuchen (a version that contains apples), the Dutch baby began its ascent to popularity around the same time as the phonograph and lightbulb were invented—and right about the time when German immigrants flocked to the United States in hopes of a better life.

While many 18th-century Germans fled the religious persecution of their home country and settled in Pennsylvania, German immigration to America peaked in the late 19th century. Instead of fleeing religious persecution as earlier immigrants had done, hundreds of thousands of farming families were displaced by geo-political conflict with Tsarist Russia. Most of these newer immigrants found a home in the midwest, where their skill in growing wheat helped to cement the region as the breadbasket of America.

Both the Pennsylvania Dutch and newer immigrants brought their recipes with them—including this pancake, which would soon become interwoven with modern-day brunch culture.

Some of the earliest recipes for the dish were published in the late 19th century. These recipes typically feature a thin, egg-rich batter made with a scant amount of flour and plenty of milk that was poured into a hot, buttered pan and baked until puffed.

Before long, the pancakes, which are simple to make, began appearing on breakfast menus in hotels. It was regularly featured on the breakfast menu of San Francisco’s St. Francis Hotel, a favorite destination of turn-of-the-century famous artists, socialites, and politicians such as Woodrow Wilson and William Jennings Bryan. While the St. Francis Hotel’s chef served the pancakes with stewed prunes, most recipes called for serving them with sugar, syrup, or jelly.

At this time, most recipes still referred to them as “German pancakes,” which raises the question of how, exactly, the name “Dutch baby” originated. While some people suggest that they earned their name as a reference to the Pennsylvania Dutch, the most likely story points to the Pacific Northwest and a small, family-run restaurant called Manca’s Café.

In 1899, Victor Manca gathered his family and moved from Utah to Seattle, where he opened a small café. Among the many dishes that he offered was a custardy, puffed pancake. According to the family’s story, Victor’s young daughter called the pancakes “Dutch babies” because she couldn’t pronounce Deutsch, the German word for “German.” The name stuck.

The restaurant remained successful and served the pancakes for decades. In 1960, Sunset Magazine featured the restaurant and the pancake recipe in its February issue. The German-American classic found a new audience of hungry cooks under its brand-new name.

Making It at Home

With its dramatic presentation, it might seem that the Dutch baby pancake is complicated or fussy. It’s not. Rather, it’s one of the easiest recipes you can make and requires none of the repetitive, painstaking flipping that individual flapjacks need.

You start by whisking together a batter of eggs, milk, and flour with a little salt until it becomes smooth with the consistency of heavy cream. The oldest recipes stop here, but newer versions typically include sugar for sweetness and flavorings such as cinnamon or vanilla.

After mixing the batter, you’ll warm butter in a hot, cast iron skillet until it froths and foams. Then, you pour in the batter. Once the edges begin to bubble, put the skillet into a preheated oven and bake it for about 10 minutes, until it puffs and the edges of the pancake pull away from the skillet. Serve it right away. A squeeze of lemon and a dusting of powdered sugar are always popular.

Regardless of what you add or what you call it, this simple, custardy pancake is easy to make and easy to love—just get it to the table fast.