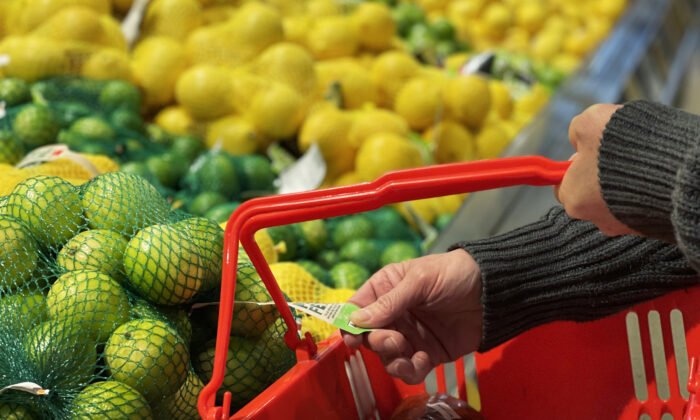 A customer looks at the price of limes at a fruit stand in the central business district in Sydney, Australia, on Aug. 16, 2022. (Lisa Maree Williams/Getty Images)
Business Columnists

If you’re the CEO of the world’s largest retailer, you’re not off to a great start if you are highlighting sales of men’s flannel. Yet, such was the case for Walmart’s chief executive, Doug McMillan. Consumers are behaving differently than they had last year, even when compared to earlier this year, and this poses serious challenges.

It wasn’t really men’s flannel that McMillan specifically noted during his appearance on CNBC on Aug. 16. What apparently sold really well during the company’s prior quarter, besides back-to-school basics, was low-priced men’s flannel.

No one is immune from this year’s decidedly not-booming macroeconomic climate. Where last year Consumer Price Index (CPI) rates were confused for the underlying pace of the economy, this year we more easily see the distinction. As McMillan put it, “People are really price-focused now, regardless of income level. And the longer this lasts, the more that’s going to be the case.”

While many people have an understandably hard time accepting a distinction between the “inflation” we’ve been experiencing and some other “inflation” everyone has talked about, right now is when it starts to matter the most. The latter is of the monetary variety, an excess of currency sometimes (in more ancient times) too much money.

And though U.S. Treasury made you think there had been tons of the greenback “printed” during 2021, via its Treasury-direct drops into citizen accounts or via the Federal Reserve’s turbo-charged quantitative easing, neither of those contributed to increasing the effective supply of money—which, as I wrote here last week, is the sole domain of the global banking system.

Without the money, consumer prices had to have been the product of “inflation.” And there have been numerous historical examples of the same. Unlike the Great Inflation during 1965–82, which had been a product of bank-created monetary surplus, rapid price changes from those others were caused by constraints on the supply or availability of goods.

We know how supply shocks end, and they do so very differently from actual inflation. In nearly every case, the end isn’t just recession but deflationary recession (sometimes worse). Thus, the difference between this “inflation” and the inflation many had been led to imagine will be greatest just ahead.

This is because while we may argue the cause, no one will argue what’s happened. Prices have risen sharply. As a consequence, American consumers and businesses (and all their counterparts around the world) have suffered through an anti-boom, paying more, oftentimes a lot more, if only to get less.

That, too, is a distinction between “inflation” and inflation. In the latter case, higher input costs are more easily passed on to consumers (and back again via higher wages) via the excess of money, currency, and credit. Without the money and credit, eventually businesses get stuck with the input costs while consumers reach a point of exhaustion, and the whole thing has to go in reverse.

More and more anecdotes and data of late project we might have hit that inflection point. In addition to Walmart’s lamentation, its biggest competitor, Target, has fared comparatively worse for the same problem.

Target’s comparable-store sales (a metric which compares the sales of only stores that have been open more than 13 months, therefore isolating organic revenue growth from sales expansion due to increasing store counts) had surged 8.9 percent in 2021. For the second quarter of 2022, the figure was down to just 2.6 percent.

Target’s chief growth officer, Christina Hennington, while first trying to laud the 2.6 percent, she eventually admitted how shoppers’ “confidence in their personal finances continues to wane.”

And this wasn’t anticipated by the company, nor any of its competitors who were blindsided because they had confused “inflation” for inflation. In doing so, each had purposefully over-ordered product, and then ordered some more, extending even ballooning inventories all across the country (and the rest of the world, too).

It was this disparity which had put Target and Walmart in the news a couple months ago. After having cautioned about a huge excess of unsold goods then, Target still just reported modestly higher inventory for its most recent quarter-end.

Management tried to explain this as a mix of higher prices (yes), pre-ordering way in advance for the Christmas season (pulling forward demand, thus not a good sign for the next couple of months), while also claiming the company didn’t want to cut back too much in case consumers somehow find themselves in better shape as the summer turns to fall.

Like economists, retailers retain an overoptimistic background no matter how the obvious the change in circumstances.

To move beyond mere anecdotes, powerful as they might be, the U.S. Census Bureau just recently reported July 2022 retail sales that adequately illustrated the country and world’s predicament. Total consumer spending on goods had increased 9.1 percent when compared with retail sales in March 2021. Adjusting for prices, however, “real” retail sales fell 2.1 percent during that same time frame (we see this all over the world).

A good chunk of that unfortunate imbalance was due to the massive spike in gasoline prices. When adjusting for sales recorded at gasoline stations, however, the results are similar: nominal retail sales were up 6.2 percent from March 2021 to July 2022, though down 2.4 percent after accounting for “inflation.”

Paying 6 percent or 9 percent more in order to get 2 percent less is the recipe for the same kind of recession (deflationary) as those previous historical supply shock episodes.

And while retailers were easily distracted by economists, politicians, and central bankers who told them last year’s “good times” would surely last, markets were pricing instead for the exact scenario right now playing throughout the global economy.

The U.S. Treasury yield curve inverted first in March 2022, sure, but that was merely one—and a big one a that—signpost along a journey of growing skepticism tracing all the way back to last May. The curve had been flattening from then on, a clear sign for serious and widespread doubt about the economy sustaining its 2021 “boom.”

By October, the market took flattening (way) up a notch, meaning those doubts, unlike legitimate economic growth prospects, had accelerated. These were clear warnings long before the March inversion, meaning that inversion wasn’t when trouble showed up but when it had been mostly confirmed.

From its unfortunate inception, many had claimed secular inflation for what had always been a transitory supply shock. Throughout the whole thing, the market has confirmed which was the fake, and did so a long time before recession-wary retailers were made to fess up to their own error of having followed the wrong narrative.

This isn’t an overly pedantic discussion of semantics. There are, and will be, all-too-real consequences for these categorical differences.