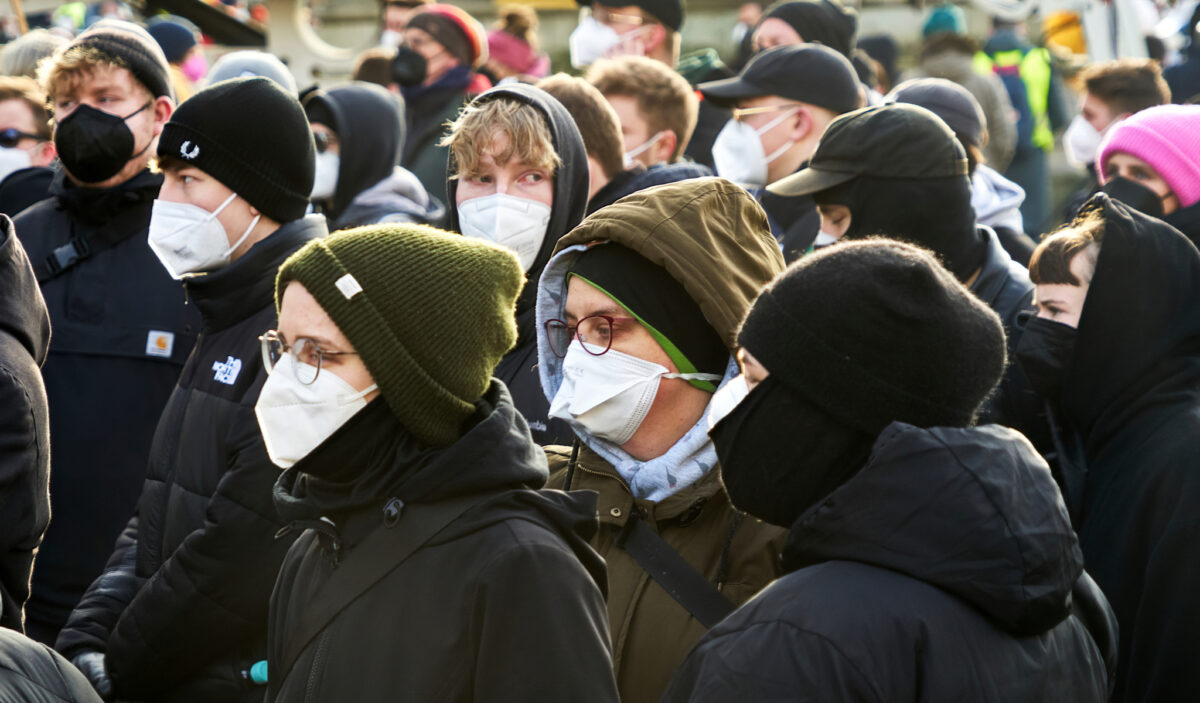 Young people wear masks against the COVID-19 contagion and caps on their heads without distancing at a demonstration against COVID-19 deniers in Braunschweig, Germany, on Jan. 8, 2022. (geogif/Shutterstock)
Health Viewpoints

The Psychology of Mimetic Contagion

My friend and colleague Dr. Mary Talley Bowden recently posed this important question, which has puzzled many people during the pandemic:

“A friend of mine from the age of 5 won’t have anything to do with me now because of my Covid views. I know we’ve all experienced this. @akheriaty can you explain the psychopathology?”

Such a great question. A friend of mine from the age of 5 won’t have anything to do with me now because of my Covid views. I know we’ve all experienced this. @akheriaty can you explain the psychopathology? https://t.co/qdbMT6HOgK

I suggest that two accounts of social psychology—the mass formation theory of Mattias Desmet and the mimetic contagion theory of Rene Girard—help to answer this question. These two theories also go a long way toward explaining some of the more puzzling behaviors we saw emerge during the COVID-19 pandemic.

The first theory, mass formation, was brought to public attention when my friend Robert Malone briefly summarized it on Joe Rogan’s podcast. The internet blew up as people searched to learn more about the concept. The tech overlords at Google intervened to bury information on the theory when people searched for “mass formation.” This interview landed Malone in permanent Twitter prison and brought the furies down on Rogan.

But Desmet’s theory is based on a body of sound social theory and psychology that has accumulated over the past hundred years. As professor Desmet at the University of Ghent has described, under conditions of mass formation, people buy into a narrative not because it’s true, but because it cements a social bond that they desperately need.

Mass (or crowd) formation emerges in a society under very specific conditions. The first condition is that people experience a lack of connectedness to other people, a lack of meaningful social bonds. Consider the loneliness epidemic which was worsened by the lockdowns. Our only bonds were virtual, an impoverished replacement for real human connection.

The second condition is a lack of meaning in life, which follows directly from the lack of embeddedness in social networks—familial, professional, religious, and so forth. Desmet said in regard to this connection that Gallup polls in 2017 found that 40 percent of people experienced their job as completely meaningless, with another 20 percent reporting a strong lack of meaning in their work. Only 13 percent found their work to be meaningful.

Other social theorists from Max Weber to Émile Durkheim have documented this trend toward social atomization and loss of the religious dimension over the past two centuries in the West. The occurrence of mass formation thus became more frequent in the 19th and 20th centuries, when a mechanistic view of man and the world began to predominate.

The third condition for mass formation is a high level of free-floating anxiety in the population. One doesn’t need studies, charts, and graphs—although there are plenty now—to demonstrate this condition worldwide during the pandemic. Free-floating anxiety is a form of fear not directed toward a specific object or situation. If I’m afraid of snakes, I know what I fear, and so I can manage this by not going to the reptile section of the zoo and not hiking in the desert.

Free-floating anxiety, such as the anxiety produced by an invisible virus, is extremely intolerable because one doesn’t have the means to modulate or control it. People stuck in this state chronically are desperate for some means to escape it. They feel helpless because they don’t know what to avoid or flee in order to manage this aversive state of mind.

The fourth condition, which follows from the first three, is a high level of frustration and aggression in the population. If people feel socially disconnected, that their life makes no sense or lacks meaning (perhaps because they can’t work or go to school under lockdown conditions) or that they’re beset by free-floating anxiety and psychological distress without a clear cause, they’ll also feel frustrated and angry. And it will be hard to know where to direct this anger, so people look for an object to which they can connect their anxiety and frustration.

Because many people participate in this strategy collectively, a new kind of social bond—a new solidarity—emerges. The new social bond takes people from a highly aversive mental state to an almost euphoric relief, which spurs them to participate in the formation of a social mass. People begin feeling connected again, thus resolving part of the crisis. Life with this common bond starts to make sense, resolving the problem of meaning by uniting against the object of anxiety, which also allows an outlet for their frustration and aggression. But the pseudo-solidarity of the mass is thus always directed against a stigmatized outgroup; theirs is a common bond cemented by anger and disgust.

People buy into the narrative, even when it becomes absurd and out of touch with facts on the ground, not because they believe in the narrative, but precisely because it creates a social bond that they don’t want to relinquish. As in hypnosis, their field of vision becomes excessively narrowed, focused exclusively on the elements of the accepted narrative. They may be dimly aware of collateral damage or contradictory facts, but these have little to no cognitive or emotional effect—evidence simply ceases to matter.

The anger of the new social mass gets directed precisely against the people who don’t want to participate in the mass formation, who reject the basis for the new social bond. For months, with high-profile figures from the president to public health officials lamenting the “pandemic of the unvaccinated,” it became clear who was the designated target: those who declined social distancing, mask-wearing, vaccination, or other COVID-19 measures.

For the mass that energizes around these measures, they become ritualistic behaviors that cement the social bond.

Participation in the ritual, which lacks pragmatic advantages and requires sacrifice, demonstrates that the collective is higher than the individual. For this portion of the population, it doesn’t matter whether the measures are absurd. Think of walking into a restaurant with a mask on and removing it as soon as you sit down, for example.

Desmet’s research suggests that approximately 30 percent of the total population, typically those who are temperamentally prone to hypnosis, fully embrace the narrative that drives this mass formation process. Another 40 or 50 percent don’t fully embrace the narrative but also don’t want to publicly resist and incur the censure of the 30 percent segment of true believers. Another 10 to 20 percent of the general population isn’t readily hypnotized and remains highly resistant to the process of mass formation, even trying to resist its destructive excesses. One’s level of intelligence doesn’t correlate to which of these groups one ends up in, although some personality factors likely do.

Individuals in the mass are impervious to rational argumentation, and they respond instead to vivid visual images, including numbers and statistics presented in charts and graphs, and repetition of the messages central to the narrative. Desmet has also claimed that—as in a hypnotized state where one can be insensitive to pain, allowing even for surgery without anesthesia—someone caught up in the process of mass formation becomes radically insensitive to other important values in life. All kinds of goods can be taken from him, including his freedom, and he takes little notice of these losses and harms.

In extreme cases, masses become capable of committing atrocities, all the while believing that they’re performing an almost sacral duty for the greater good. As Gustave Le Bon, author of the 1895 classic work, “The Crowd: A Study of the Popular Mind,” pointed out: If those who are awake try to wake up those who are sleepwalking, they will initially meet with little success; however, they must continue to try, peacefully and nonviolently, to prevent the worst outcomes. Any violence will be used as an excuse for the aggressors to increase their persecution and repression. So it is important to continue to speak the truth and exercise nonviolent resistance.

In addition to the mass formation theory, the insights of Stanford professor Rene Girard, one of the 20th century’s greatest thinkers, on mimetic contagion and the scapegoating mechanism are helpful to understand this phenomenon. In many ways, this complements the mass formation account. Girard saw that we imitate not only one another’s behaviors, but one another’s desires. We end up wanting the same thing(s), e.g., “I need to be first in line for the vaccine, which will let me get my life back.”

This can lead to mimetic rivalry and increase social tension and conflict. The mechanism that societies use to resolve this conflict is scapegoating. The social tension (amplified during lockdowns and with fear-based propaganda) is attributed to a person or class of person, with the proposal that if we can only rid ourselves of the [fill in the blank “unclean” member(s) of society] the social tension will resolve.

The banishment or destruction of the scapegoat (in this case, the unvaccinated) falsely promises to return society to a harmonious state and diffuse the threat of violent conflict. While scapegoating does relieve social tensions a bit, this is always only temporary. Mimetic rivalry continues, social tensions once again build, and another scapegoat must be identified (e.g., now the enemy are those who spread alleged disinformation). The cycle continues.

Originally published on the author’s Substack, reposted from the Brownstone Institute.