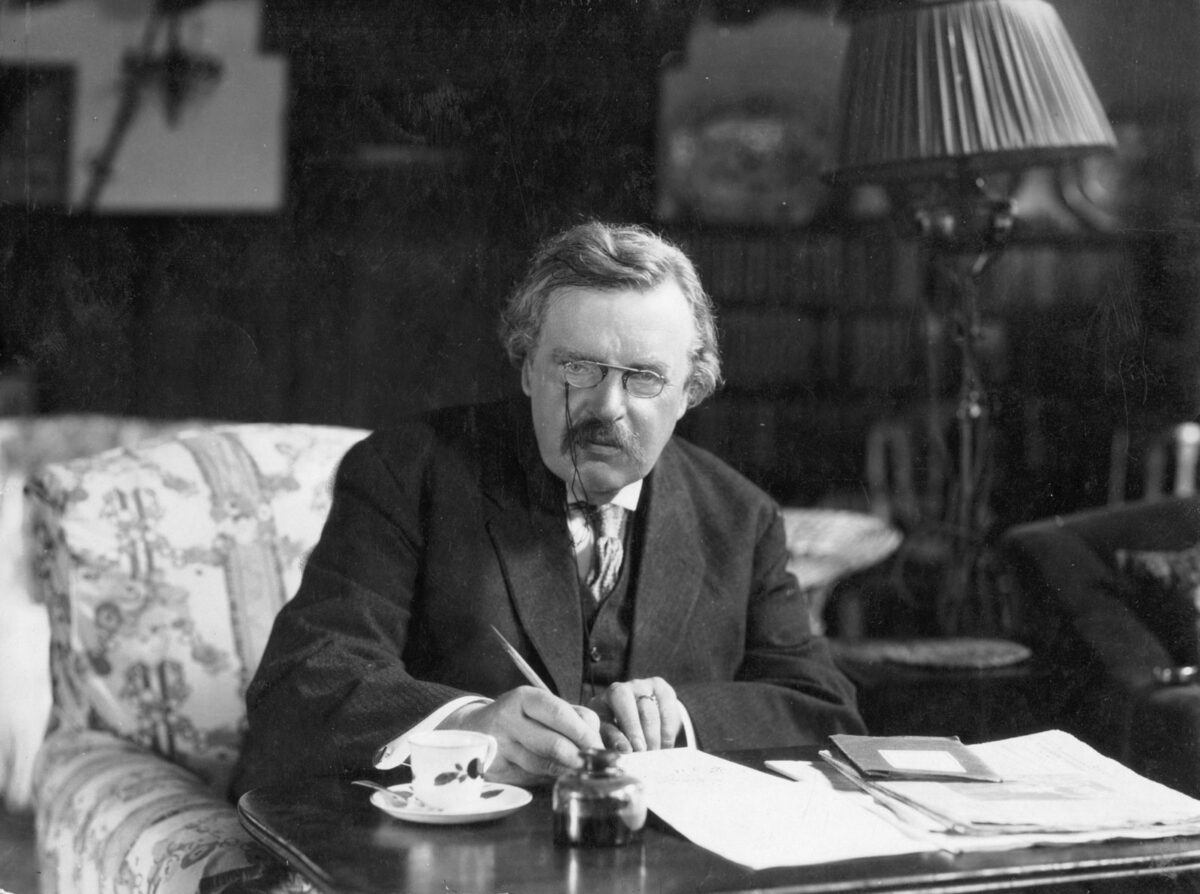 The Prince of Paradox: G.K. Chesterton and the Art of the Epigram

Born in 1874 in England, as an adult he stood 6 feet, 4 inches tall and weighed close to 300 pounds. He often wore a cape, smoked cigars, carried a sword, praised beer and alehouses, and converted to Catholicism. His bulk and eccentricities made him a popular figure for caricature.

he bought and carried a pistol on their honeymoon to protect his bride, and he remained her devoted husband until his death 35 years later. Famously absentminded, he several times sent telegrams to his wife, asking her where he was supposed to be. Those who knew him, even his opponents in public debate like George Bernard Shaw and H.G. Wells, loved him for his gift for laughter and his ability to poke fun at himself.

He was the common man’s philosopher, a highly effective Christian apologist, a journalist, and a storyteller who wrote thousands of essays and hundreds of poems, novels, biographies, and plays. These include such critically acclaimed works as biographies of Charles Dickens and Saint Francis, novels like “The Man Who Was Thursday,” poems such as “Lepanto” and “The Ballad of the White Horse,” and his now classic books on the Christian faith like “Orthodoxy” and “The Everlasting Man.”

The Prince of Paradox

His literary style, intelligence, and common sense have influenced writers such as Ernest Hemingway, F. Scott Fitzgerald, J.R.R. Tolkien, Evelyn Waugh, Graham Greene, Theodore Roosevelt, Aleksandr Solzhenitsyn, Étienne Gilson, Jorge Luis Borges, C.S. Lewis, and Peter Kreeft. These and many others either highly praised the man’s works or claim a direct influence on their own writing. His books inspired such filmmakers as Alfred Hitchcock and Orson Welles.

His “Father Brown” stories have become a popular television series. Thanks to various devotees, nearly all the work that came from his pen remains in print.

He also wears the crown of “the Prince of Paradox.”

No other writer in the last two centuries approaches Chesterton in his deployment of paradox and the epigram. Embedded in all those hundreds of thousands of words he left behind are adages of great wit and wisdom. Those of us familiar with some of his writing and who write in whatever capacity—journalists, storytellers, poets—remain in awe of his ability to turn a phrase.

Let’s look at just a few of these aphorisms as given to us by The Society of Gilbert Keith Chesterton.

“The free man owns himself. He can damage himself with either eating or drinking; he can ruin himself with gambling. If he does he is certainly a damn fool, and he might possibly be a damned soul; but if he may not, he is not a free man any more than a dog.”

In 1935, Chesterton—who was giving a series of talks on the BBC and may have had Nazism in mind with this remark—reminds us that when we turn over to the state, or to some other authority, our rights to ruin or to better ourselves, we also turn over our rights to be fully human.

“The true soldier fights not because he hates what is in front of him, but because he loves what is behind him.” This one from The Illustrated London News remains true of American soldiers today. Most of them serve for reasons of patriotism—they love their country, its ideals, and way of life—and not because they hate some other people. To them, great thanks. They are the ones who protect us and other innocents in different countries from murder and intimidation.

“The Christian ideal has not been tried and found wanting; it has been found difficult and left untried.” One of Chesterton’s more famous quotations, this epigram has a hidden meaning for some who follow Christianity. That meaning lies in the words “tried” and “untried.” Here, Chesterton uses the word “tried” as a synonym for “attempted,” but we can also read it as “to seek after.”

“Tradition means giving votes to the most obscure of all classes, our ancestors. It is the democracy of the dead. Tradition refuses to submit to that arrogant oligarchy who merely happen to be walking around.”

Here in three sentences, Chesterton reminds us of the value of tradition and its links to those who have gone before us. When he urges us to give votes to that “most obscure of all classes, our ancestors,” he reminds us of the good in some of the institutions and customs those ancestors left us.

“Fallacies do not cease to be fallacies because they become fashions.”

That one appeared in The Illustrated London News almost 90 years ago. True then and true now, though some may be too blind or too hysterically bound to a cause to recognize that truth—or for that matter, truth in general.

“A strange fanaticism fills our time: the fanatical hatred of morality, especially of Christian morality.”

A “fanatical hatred of morality,” particularly in matters of sexual morality, marks our culture. When we banish religion from public life, we have left only the residue of morality. Some try to invent new moralities while simply preaching universal tolerance, which offers no moral code at all. Chesterton understood where this “strange fanaticism” would lead, and we are living with it still.

A Thing Worth Doing

Here is my favorite Chestertonian quip. This wonderful advice, turning on its head the old saying “Anything worth doing, is worth doing well,” elevates the amateur above the professional, the generalist above the specialist. Let’s say you enjoy playing golf. You may be a mediocre golfer or even a terrible golfer, but your level of play isn’t the point. The point is the pleasure you derive from being out on the course. (Of golf, Chesterton wrote: “I regard golf as an expensive way of playing marbles.”)

If you’re yearning for a voice of sanity, common sense, and wit in an age that all too often lacks all three, give Gilbert Keith Chesterton a look. It’s a thing worth doing.

To find out more about G.K. Chesterton and his writings, visit The Society of Gilbert Keith Chesterton or Ignatius Press.