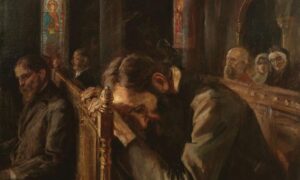 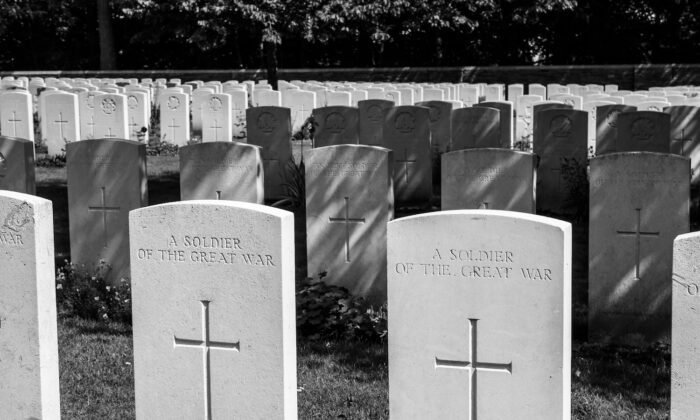 As leaves fall, mid-November invites us to remember fallen soldiers, especially those of World War I. (Willequet Manuel/Shutterstock)
Literature

The Pity of War: The Remarkable Poets of World War I

For most of us, November is one of those in-between months, in this case a pause between October’s glorious colors and the iron-dark days of winter. November brings Americans Thanksgiving, with its family gatherings, sumptuous feasts, and for some, football games, followed immediately by Black Friday, the Christmas shopping day after Thanksgiving when all the crazy sales begin and retailers long for crowds at the doors of their stores and shops. For Roman Catholics and some other Christians, November means All Saints Day and All Souls Day, when they remember their saints and pray for their dead.

And for some who are historically minded, November is the month to reflect on the disaster that was World War I.

The War to End All Wars

The year was 1918. At the 11th hour on the 11th day of the 11th month, the Great War, as some later called it, came to an end. World War I killed 17 million soldiers, sailors, airmen, and civilians; it wounded, crippled, and maimed many others. It toppled kings and empires, sounded the death knell of European colonialism, brought communism to Russia, ushered in the rise of fascism in other countries, and left the United States the leading economic power in the world.

Life in the trenches during this war featured a hell on earth unimaginable to most of us today. The stench of sweat, excrement, and rotting flesh of corpses; the mud and the rain; the shelling, snipers, and gas attacks; the rats, lice, and lack of basic human hygiene; the mass assaults in the face of artillery and machine guns—the British, on the first day  of the Battle of the Somme alone, on July 1, 1916, suffered over 57,000 casualties, including some 19,000 dead. All these horrors and more caused some hopeful observers to label this conflict “The War to End All Wars.”

These same trenches also produced some of the finest war poetry in the English language.

Despite the slaughter and grubby life of trench warfare, some poets viewed the fighting with the sentiments associated with past military struggles. March of 1915 saw the publication of Rupert Brooke’s “The Soldier”:

Brooke died that same year from sepsis, the result of a mosquito bite, while on a military expedition in the Mediterranean.

John McCrae was a Canadian poet and physician who served as a surgeon during the war. After a friend’s death, he wrote this poem urging others “to take up the torch” against the enemy:

“In Flanders Fields” became immensely popular on its publication in 1915. Dr. McCrae died three years later from pneumonia, while he was still serving in his unit in France.

Other poets sounded a different trumpet call, describing the horrors of the brutal fighting.

Owen died in action one week before the war ended. His mother received notification of his death on Armistice Day, while church bells across Britain were announcing the end of the slaughter.

The poets who survived the war continued to explore in their verse the agonies they had endured.

Though he made his living by writing such novels as “I, Claudius” and “Claudius the God,” Robert Graves was first and foremost a poet. He wrote 141 war poems—he destroyed many others rather than publishing them—and he was also the author of a classic war memoir, “Goodbye to All That.” Like Siegfried Sassoon, Ivor Gurney, and some of the other poets who survived the war, Graves suffered from neurasthenia, which would later be called “shell shock” or “post-traumatic stress disorder.”

David Jones, a Welsh poet and convert to Roman Catholicism, took years to write “In Parenthesis,” a poem of epic length describing the trials of a fictional John Ball and his fellow soldiers from their departure in England to France to the Battle of the Somme. Published in 1937, “In Parenthesis” won high praise from poets like William Butler Yeats, T.S. Eliot, and Stephen Spender.

Some critics have contended that the poem offers too little protest of the war, but in “The Great War and Modern Memory,” American critic Paul Fussell only partially agrees, praising “In Parenthesis” and writing that “The tradition to which the poem points holds suffering to be close to sacrifice and individual effort to end in heroism; it contains, unfortunately, no precedent for an understanding of war as a shambles and its participants as victims.”

Jones spent the last years of his life, according to the Poetry Foundation, “quietly working, trying to salvage the remnants of traditional Western culture from the onslaught of the twentieth century.”

In Poets’ Corner in Westminster Abbey, a slate monument commemorates 16 British poets from The Great War. The inscription on the slate, taken from the writing of Wilfred Owen, reads: “My subject is War, and the pity of War. The Poetry is in the pity.”

On target, Lieutenant Owen. On target.