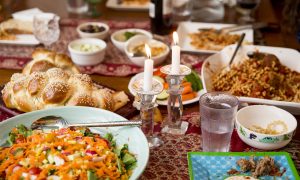 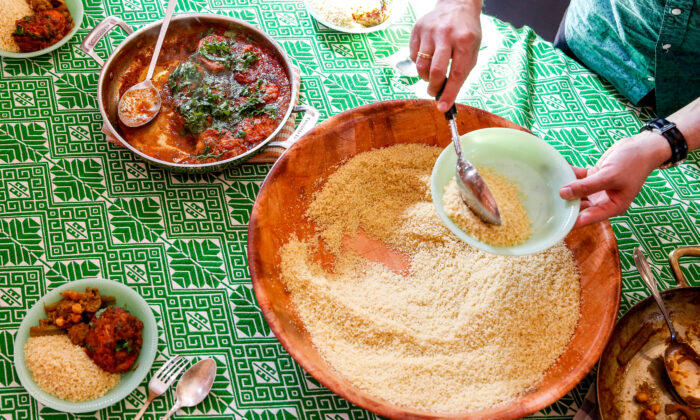 The Patient Art of Hand-Rolled Couscous

Making fresh couscous is a labor of love—but for Ron and Leetal Arazi, there's no other way
By Crystal Shi

NEW YORK—On a crisp autumn morning, I duck into the warmth of Ron and Leetal Arazi’s Brooklyn home to be greeted with cheerful smiles and a breakfast spread.

There’s a log of tender poppy seed babka, from Leetal’s mother, who is visiting from Israel; warm slices of challah, laid beside butter and homemade quince and apricot jams; and hot Moroccan spiced tea, steeped with fresh mint from the garden and lightly sweetened with honey.

To be clear, she’s not talking about the boxed, instant stuff you find on supermarket shelves, which has been mechanically pre-cooked and dried, and can be dumped into a pot of boiling water and ready to eat in all of five minutes. (Nor is she talking about the chewy pearls of wheat pasta known as Israeli couscous, which was invented in the 1950s in Israel, where they’re called ptitim, and got their misnomer when they spread to America in the ‘90s.) Instant couscous is convenient to be sure, but it’s a dull, flavorless shadow of what couscous can and should be.

“You can steam it, you can try to manipulate it, but it never comes out as fluffy or airy as fresh couscous—and definitely not as tasty,” Ron says.

What we’re fueling up for is a lesson in the real deal: fresh, hand-rolled couscous, made from semolina and water, gently rolled together into tiny spheres and repeatedly steamed to fluffy perfection over an hours-long process. It’s how North African home cooks traditionally made the staple dish for centuries—before the industrial, processed variety came to dominate the market.

Ron, who learned to make couscous the traditional way from his Moroccan mother, wants to turn back that tide.

The Arazis are the founders of New York Shuk, a Brooklyn-based food company that makes condiments and spices from Sephardic and Middle Eastern Jewish cuisines. Their products range from a sweet, subtly spicy homemade harissa to an earthy, golden-hued hawaij (a Yemenite spice blend that includes turmeric, cumin, and black pepper). Couscous, though, is how they got their start.

The couple met working as chefs in Israel, where they were both born and raised, and decided to move to New York City some seven years ago to start a business of their own. They wanted it to be something that would champion “our families’ food, our families’ cultures,” Ron says, a side of Israeli cuisine not as well known as, say, matzo balls and lox. Ron’s mother is originally from Morocco, while his father hails from Lebanon; one side of Leetal’s family is from Turkey, and the other Eastern Europe.

In December 2012, just a month after they arrived in New York City, that idea became New York Shuk. And their first cross-cultural bridge, they decided, would be paved with fresh couscous: something so integral to their culinary heritage, but so rare and little known here.

In the Maghreb, the swath of North Africa including Algeria, Morocco, Tunisia, and Libya where couscous originated, the dish is deeply embedded in the local culture and history. Each culture has its own variation—Tunisians, for instance, typically roll their couscous very fine, while Moroccans prefer theirs slightly more coarse and textured—as does every individual family that makes it.

In any case, it’s a communal affair. Traditionally, the women of the family would get together to hand-make couscous once a week, trading gossip and laughter all the while, and it would be served family-style, typically with a stew spooned over the top. A symbol of hospitality, it’s also the go-to dish for any special occasion: a wedding, a funeral, a newborn baby, a move to a new house.

“For older generations, couscous-making was something that was embedded in the culture so much that you just couldn’t live without it,” Ron says.

That culture spread to Israel, due to its large population of Jews of North African origin, but in the country today, “no one makes it anymore,” Leetal says. “No one has the time.”

In Ron’s family, he’s essentially the sole torchbearer: neither his mother nor any of her seven siblings make couscous from scratch anymore—partially due to age, and partially due to disinterested grandchildren—and his two older sisters never learned. Even restaurants reach for the boxed stuff, which is so much cheaper and faster to make.

After moving to the United States, the Arazis found even less fresh couscous to speak of. Here, there’s also another reason for the shortage: people simply don’t know enough about it to demand it.

“Most people actually think that couscous is a grain, like rice,” Ron says. (Indeed, when I later tell friends about learning about handmade couscous, I’m met with blank stares: “What’s there to hand-make? It doesn’t just grow like that?”)

“It became apparent that [this part of] our culinary heritage is not going to stay alive, unless we do something about it,” Ron says.

And so they set out to give New Yorkers a proper couscous education, starting with a fresh couscous stand at Smorgasburg, the popular Brooklyn open-air food market, in the spring of 2013. By fall, they launched the first iteration of their pantry product line. They soon found themselves selling their couscous to Daniel Boulud’s restaurants, and began hosting various events and couscous-making classes, including intimate ones in their own home.

These days, they’re busy managing the products side of the business—and raising their almost-two-year-old daughter. (She already knows that Daddy makes “coo-cous!” in the kitchen, Ron tells me with a laugh.)

They’ve had less time to hold classes, but they’re eager to start something up again this winter. And they still jump at the opportunity to spread the word about their beloved hand-rolled couscous: when I inquire about learning, they graciously invite me into their home for a lesson.

“There is nothing complex about making couscous,” Ron says, as we gather around the kitchen counter. It’s time- and labor-intensive, yes, but simple: all it takes is semolina, water, salt, and oil (or samna, clarified butter).

Ron uses semolina from Hayden Flour Mills in Arizona, which grows and freshly stone-mills ancient and heritage grains. He has it custom-milled to a slightly coarser consistency than typical, to make the rolling process a bit easier, with some of the outer wheat germ kept in the mix, for added flavor and nutrition.

The semolina we’re using today was milled less than two weeks ago. It smells, quite simply, like fresh wheat; there’s none of the dusty staleness of much of commercially refined semolina, languishing indefinitely on store shelves.

Ron heaps the golden grains into a large, flat-bottomed wooden bowl, and uses a spray bottle of salted water to evenly wet the surface. The bottle is of his own invention—his mother, in the traditional way, would dip her hand into a bowl of water and use her fingers to flick it over the semolina as she rolled. “Think of how labor-intensive that would be,” Ron says.

Once the grains are moistened just enough, he starts to gently sweep an open hand over the surface, drawing swift circles, using the other hand to simultaneously rotate the bowl in the opposite direction. “[It’s] as if you’re petting the surface of the semolina,” he explains. “I’m imagining that I’m rolling a thousand little balls under my hand.”

Indeed, the semolina at the top has already started to clump together; it reminds me of wet sand. Ron digs his hand a bit deeper to “open up” that clumped layer, bringing the fine, dry grains at the bottom to the top, and repeats the process: spray, roll, open up, repeat.

The movements are simple, an exercise in repetition and patience, but there’s something immensely satisfying about watching the tiny beads of couscous come together, bit by bit. After a few rounds, the beads growing coarser and pricklier on the palms each time, Ron deems them ready.

“Now, don’t ask me what’s the right ratio [of water to semolina],” he warns; that’s something that will vary depending on the semolina you use and the conditions of your surroundings, and has to be determined by feel and practice. “It’s like when you’re making bread: it will always be a little different.”

The next step is to repeatedly sift the couscous through a tamis, a round mesh sieve, to get all the irregular particles to a relatively uniform size. Ron then tosses the couscous with a touch of oil, to prevent any further clumping, and transfers it into the basket of a couscoussier (or kiskis, in Moroccan), a two-part steamer. Moroccans traditionally steam their couscous over the stew they plan to serve it with, but Ron uses plain water, so as to not cover up the pure flavor of the wheat.

The couscous must steam in 15- to 20-minute increments, a total of three to four times. Between rounds, Ron dumps the couscous back into the bowl to add water and break down clumps (the first time, it all plops out in one giant clumped cake, like a sandcastle) before returning it to the steamer.

It’s a long process of waiting, but it’s not all bad: the steaming permeates the kitchen air with the most amazing smell, sweet and fragrant and pleasantly nutty.

“That’s part of the sensation, part of the experience,” Ron says. “It’s like when you walk into someone’s home, and it smells like… cooking, [with] pots on the stovetop. There is nothing more welcoming than that.”

While we’ve been huddled around the couscous, Leetal has been cooking up the rest of our lunch spread: mafrum, a North African dish of sliced potatoes stuffed with meat and simmered in a bright tomato-harissa sauce; and a stew of beef meatballs, celery, and chickpeas, seasoned with hawaij and more harissa. They’re rich and flavorful, perfectly spiced—but they’re clearly the supporting cast.

When the couscous is finally ready, Ron brings the entire steaming bowl of it directly to the table, to spoon onto our plates in great golden mounds. It’s delicious: light and fluffy, with a delicate bounce, and a toasty flavor and refreshing sweetness that lingers on my tongue. I could eat it by the spoonful.

That’s how it should be. Here at the Arazis’ table, couscous, far from a flavorless convenience food, shines at center stage.

“Couscous is a handmade product,” Ron emphasizes. “It’s not something that you can just make in a machine and dry up and put in a box, because it just doesn’t come out the same.”