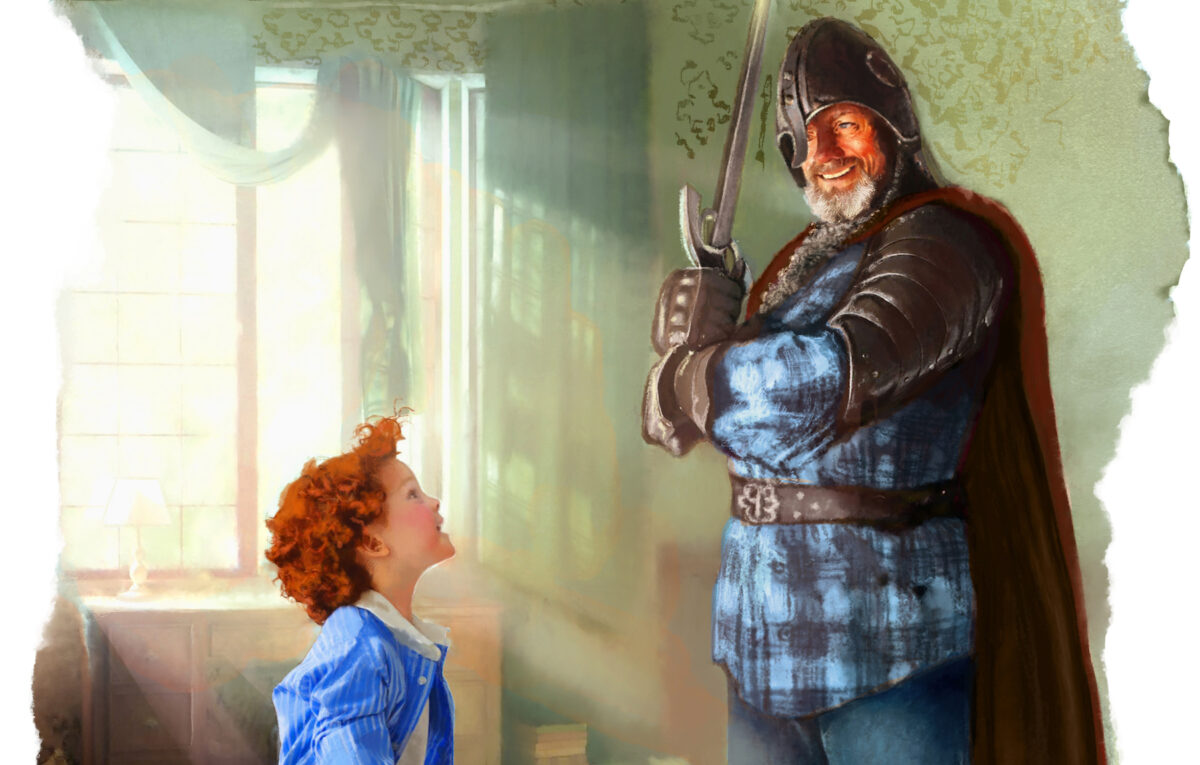 More than 10 years ago, my daughter and her family visited me in Asheville, North Carolina. My eldest grandson was about 5 years old. Like lots of kids his age, he adored comic book characters with superhuman powers, and unbeknownst to me, his uncle, my eldest son, told Michael that Grandpa was a superhero. He told the kid: Every night, your grandpa goes out into the city and fights the bad guys.

Later that afternoon, Michael asked me about a sword and scabbard hanging on the wall of my bedroom, a ceremonial sword I had carried long ago as an eighth-grader in military school. After taking that rickety apparatus from the wall, I held it to my side, drew the sword from its scabbard, and with a flourish, aimed it toward the ceiling.

That boy’s eyes grew as wide and glowing as a cat’s in an alley at midnight.

“Oh my gosh!” he yelled. “You really are a superhero!”

Of course, I had no idea what he was shouting about until my son explained.

That incident brought some laughter, in part because I am definitely no Batman or Spider-Man. But I am the child of a deceased father, I’m the father of four grown children, and the grandfather of 22 grandchildren. Some things I’ve done right as a son and a father, some I’ve done wrong, but I learned some lessons from my mistakes, as have other fathers.

And now Father’s Day has arrived again, and it’s time to think once again of what fatherhood means.

No one will ever look at the last half-century as a golden age of fatherhood.

Divorce, welfare for single moms, courts more sympathetic in child custody cases to mothers than fathers, deadbeat dads, children who reject their fathers and vice-versa, our government’s failure to elevate fatherhood via the bully pulpit, broad attacks from cultural gurus and academics on the patriarchy and on masculinity itself: the writ against fatherhood is long and destructive.

Don’t get me wrong. I know plenty of great dads, men who support their families, engage with their children, dole out advice—and when need be, discipline—in their efforts to raise their daughters and sons to become competent adults. In the community where I live, large families are more common than rare, and nearly all of those families include an active dad.

On the other hand, I’ve known dads who abandoned their families, who cut off contact with their children, and in some cases, have never met those children. The most widespread of these paternal failures and absenteeism can be found in many of our large cities, where fatherless children, most of them male, grow up on the street under the mentorship of drug dealers and gangs. A recent example: The disturbed teenager who killed 21 people at Robb Elementary School in Uvalde, Texas, had a broken relationship with his father, as did his sister, who reported her estranged dad didn’t spend enough time with the family.

But what’s a good dad?

If you’re a father with children in the house, this bit of advice is a no-brainer. You roll out of bed in the morning, get ready for work, and join the kids at the breakfast table. Whatever you do for a living—bricklayer, auto mechanic, vice-president of a software company—you then head out into the world, work for your family, and come home in the evening to rejoin the kids and your spouse. No need here to raise that old question of quality time versus quantity time spent with the young ones. You’re with them as much as possible.

Presence also means keeping promises and obligations. If you told your daughter you’d be cheering her on at the soccer game, show up. If your son expects a bedtime story, grab that copy of “Goodnight, Moon” and read away.

Presence applies even for those fathers who no longer share a house with their children. If you want to be a good dad and influence your children, visit with them as often as possible. If you live in San Diego and they’re in Des Moines, make frequent phone calls and arrange Zoom sessions. Even better, send them letters. Children love getting mail, and your handwritten or even typed notes are an intimate form of communication.

The Acorn Doesn’t Fall Far From the Tree

You don’t hear that old saying much these days.

The meaning is straightforward: However you behave as a parent, in this case as a dad, your children will likely model your behavior.

In “Children Learn What They Live,” Dorothy Law Nolte begins her prose poem this way:

She then shifts to more positive sentiments such as these:

Simply by our example—how we behave toward others, how we handle catastrophes such as a car that won’t start or a lost job, how we treat our family on a day-to-day basis—we fathers shape our children.

We live in a broken world, and judging by their levels of depression, the daily barrage of bad news is affecting our children. If we want to make a real difference in their lives, fathers must act as shield and sword against our negative culture, defending our kids against the bad and the ugly, but also instilling in them an affection for all those things of this world worthy of love. The list is endless: friends, family, activities such as sports or hiking, good books, nature, sitting on the front porch in the evening.

When we pass on to our children the ability to find joy in life, we give them a can-do spirit that will stand up against the storms that will come their way. Those winds and torrents are inevitable, but if we teach them love, gratitude, reason, and fortitude, these virtues will act as sea walls against whatever gales they encounter.

As with Mother’s Day, for many people, Father’s Day isn’t all sunshine and roses. For every dad whose kids, grown or otherwise, throw him a backyard barbecue or shower him with gifts and cards of appreciation, there are other fathers who haven’t spoken to their daughters and sons for years. Odds are that some of my readers find themselves in this same sad state. Maybe your grown children thought you were a terrible dad and want nothing to do with you. Or maybe you’re a young father with children of your own, but decline any relationship with the father who left you when you were a boy.

Maybe Father’s Day provides an opportunity to reach out to that long-lost child or that disdained dad, to give that relationship one more shot. A card in the mail or a phone call may be the first small step toward reconciliation. After all, what have you got to lose?

Put on the Cape

Like my grandson, lots of you dads reading this article wanted to be superheroes when you were little boys.