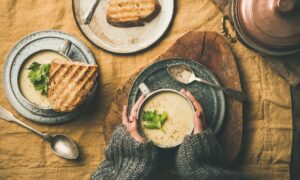 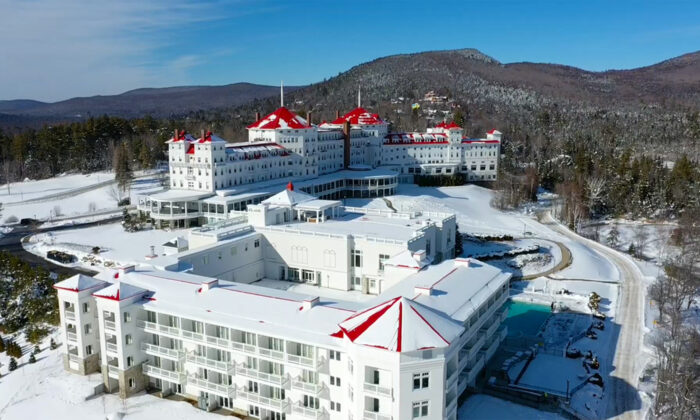 The Omni Mount Washington Resort: ‘An Enchanted Cottage at the Edge of the Wilderness’

In the late afternoon light, the woods of the White Mountain National Forest appear quiet at first, muted by a blanket of soft, fresh snow. All I hear is my own breath and the swish of my cross-country skis as I push my way through the tracks.

My husband is ahead of me, trudging up the hill on his skis, where the cross-country path divides into two separate trails. I catch up to him, panting. It’s only 6 degrees out, but I am uncomfortably warm, and wishing I hadn’t worn such a thick coat.

At the point where the trails diverge, there is a small stream, partially frozen. We stand where we are, not speaking as we take in the view, as the sounds of the forest slowly come to life around us: the bubbling stream, the squirrels rustling in the trees above us. A red cardinal hops down the riverbank in front of me, a sharp contrast to the velvety ivory I see everywhere else. The lush green pine trees are weighted down by the snow, making them look like little ghosts rising up out of the ground.

This seems to confirm what I’ve already come to suspect about Mount Washington, New Hampshire: It’s actually Narnia. Somehow, I’ve come through to the other side of C.S. Lewis’s magical wardrobe.

As we finally emerge from the wood, the red-roofed Omni Mount Washington Resort comes into view. Like the cardinal on the snow, it strikes a rich contrast against the snow-covered mountain behind it. We eagerly ski toward the entrance, ready to change out of our wet clothes. By the oversized fireplace in the French Renaissance-style Great Hall, we enjoy a beer and giant soft pretzel—foods that don’t seem grand enough for a hotel like this.

Some of the staff refer to the hotel as “an enchanted cottage at the edge of the wilderness,” and it’s easy to see why. Its well-preserved history and attention to detail (the rugs in the main hall are handmade and feature foliage local to the area), as well as the gorgeous views from the windows and veranda, give the impression that the hotel is under a wonderful spell.

There’s a grandfather clock in the main entrance, just behind the fireplace. This clock has been part of the hotel’s story for over a century. Before the hotel became a year-round resort in 1999 (up until then it was only equipped for three seasons), the starting of the clock signaled the opening of the summer season. On the final day of the season, the last guest would stop the pendulum; the clock was not to move again until the next season began.

The resort, which was finished in 1902 and funded by Joseph Stickney, a New Hampshire native whose fortune was made in Pennsylvania coal mining, was one of the last hotels of the Gilded Age, a destination built for railroad travel. As many as 50 trains a day stopped at one of Bretton Woods’ three stations and dropped off tourists and visitors. With the rise of the automobile in the coming decades, the railway numbers dropped, and other grand hotels in the area began to close. Today, the Omni Mount Washington Resort is the only grand hotel in the area that still operates.

In the summers, wealthy city dwellers from New York, Philadelphia, and Boston would escape the heat and diseases of the city and travel by train up to the Mount Washington Resort, where they would remain for three months. These families would often bring their entire staff with them for the summer.

Summer was full of high-society mingling and activity. Ladies would change their outfits up to four times a day, changing before each meal and for high tea. It’s said that Stickney’s wife, Carolyn, would spy on the ladies from her private balcony as they made their way down the grand staircase to make sure no one was better dressed than she. A portrait hangs over that balcony today in her honor—or perhaps to advise guests to dress carefully.

The hotel closed for a few years during World War II, before opening again in 1944. Mount Washington was chosen as the location for the United Nations Monetary and Financial Conference (known today as the Bretton Woods Conference). Representatives from 44 nations met for three weeks to deal with the financial aftermath of the war. The resort’s secure and remote location in the mountains made it ideal for a wartime meeting.

Our visit to Mount Washington could have been entirely consumed by the hotel, but the great outdoors beckoned. We spent the next day skiing at Bretton Woods.

With 464 acres of skiable land and nearly 100 trails to choose from, the resort keeps skiers of all skill levels entertained for the day. The newly renovated Rosebrook Lodge, accessible by gondola, offers stunning views of the valley below on a clear day.

For the non-skier, the area surrounding Mount Washington is packed with trails for hiking, snowshoeing, snowmobiling, and even dogsledding. The nearby Cog Railway, which ascends to the summit of Mount Washington in the summer, takes passengers to Wamubek Station, at an elevation of 3,900 feet.

It’s easy to see why so many city dwellers were eager to get away to Mount Washington, and why tourists continue to flock there today. Full of history, stories, and natural beauty, the area lures visitors back to experience it again and again.