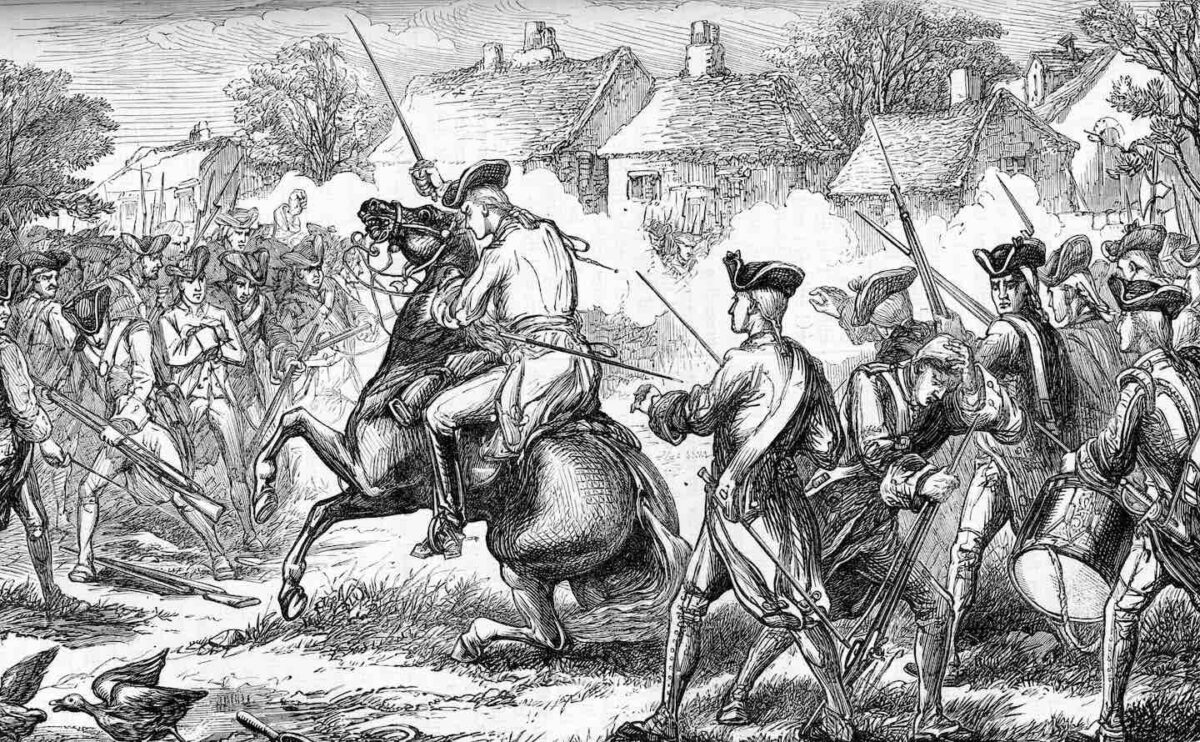 The Siege of Louisbourg in 1745, during King George’s War. Samuel Whittemore was among the Massachusetts regiment that fought this battle on Cape Breton Island, which is now part of the Canadian province of Nova Scotia. (Getty Images)
American Essence

“Old Sam” Whittemore was about 80 when he encountered a British army of about 1,700. If a standard retirement age or the right to claim disability had existed in colonial America, Samuel Whittemore would probably not have felt these things were right for him. He was just one of the many minutemen who dropped his plow to take up his musket after the first shots at Lexington and Concord were fired, but he differed from most of his fellow embattled farmers in at least one important respect: he was not young. Nor was he middle-aged. Or even close to the standard retirement age. He was, in fact, the oldest combatant to serve in any American war. And despite sustaining terrible wounds from British soldiers that day, he survived to live for another 18 years. Among the many firsthand accounts that have come down to us from April 19, 1775, Samuel Whittemore’s story stands out as a testament to resilience, longevity, and sheer toughness.

As straggling, exhausted British soldiers were retreating from Concord on their way back to Boston, they entered the town of Menotomy, where an elderly man was working in his fields. Although approximately 80 years of age and crippled, Samuel Whittemore did not hesitate. He exhorted his fellow townsmen to stand up to the British, ending his speech with the words, “If I can only be the instrument of killing one of my country’s foes, I shall die in peace.” Gathering a musket, sword, and brace of pistols, he then entered the fray as his wife fled to seek refuge elsewhere. He crouched behind a stone wall and began shooting at the passing British with his musket. Taking notice of this apparent fly, a party of grenadiers was sent to swat him. As they closed in, Sam reloaded, aimed his musket, and killed one. He drew his pistols, shooting a second soldier, then a third. When he attacked with his sword, another grenadier shot him in the face, blowing off part of his cheekbone. More regulars charged forward, impaling him with their bayonets multiple times. Deeming this insufficient to do him in, they proceeded to brutally beat him with their musket butts. At that point, the redcoats seem to have considered him reasonably dead and moved on.

Hours later, however, when local residents found Whittemore’s mangled body, he was not only still alive but (according to some accounts) still trying to load his musket. They carried him to a surgeon, who initially hesitated to treat his wounds—he was too old, he had simply sustained too many injuries. But at the behest of neighbors, Sam was patched up and carried home. Not only did he defy expectations and pull through, but within a year of recovering he enlisted for active duty in the continental army and served for short periods during the war. The muster rolls of several regiments bear his name, and at one point he held the rank of lieutenant. He witnessed his country emancipate itself from British rule, ratify its own constitution, and elect George Washington to a second term as president before finally expiring at the age of nearly 100.

Over the centuries, Samuel Whittemore, like many admired historical figures, has been subject to some mythologizing. As his fame has grown, his badges of courage have multiplied. His obituary in the Columbian Centinel from February 6, 1793, recounting his story, places the amount of stab wounds he received at “6 or 8.” By 1995, when Pulitzer Prize-winning historian David Hackett Fischer gives his version of Whittemore’s story in “Paul Revere’s Ride,” this time around, the old man is carried to the doctor, “bleeding from at least fourteen wounds.” The 19th-century accounts that Fischer drew on for this fact had inflated Whittemore’s injuries to double the number originally recorded.

Whittemore’s true age has also been a subject of debate. His obituary, the plaque on a monument to him, and later genealogical accounts written by descendants, all give different ages for him. Modern historians agree with the descendants’ accounts that have him at 78 during the Concord battle and 96 at death.

A Lifetime of Service

Although Samuel Whittemore is most famous for actions undertaken in extreme old age, his response at Menotomy was only the culmination of a long life devoted to public duty. He was born sometime around 1696 in Charlestown, Massachusetts. Little is known of his early life, but by the 1740s he was serving as a captain of dragoons and fought in King George’s War. His name is listed among soldiers of the Third Massachusetts Regiment during the Siege of Fort Louisburg in 1745, when he was nearly 50 years old. Although his first recorded conflict occurred long after the time when most soldiers hang up their uniforms today, Whittemore was present when the fort fell and went home with an ornamental French sword he had taken from an enemy.

Over a decade later, now in his mid-60s, Whittemore returned to fight in the French and Indian War, besieging and taking Fort Louisburg for a second time. Four years after this—now in his late 60s—he served in Pontiac’s War, a vicious three-year conflict against confederated tribes in the Great Lakes region. It was here that he acquired his pair of pistols, apparently taken from the body of a dead native.

After serving in this third war, Sam “retired” from military life. By this time he had already married twice and raised 10 children, and at 70 years of age he began taking a leading role in local politics. For several years following the Stamp Act’s repeal in 1766, he was elected to different committees to advocate on behalf of his fellow citizens—first for Menotomy, then for Cambridge—regarding Massachusetts’ grievances against acts of Parliament. His signature survives on a letter written by the Cambridge Committee of Correspondence, showing that he took part in protesting the Tea Act not long before the Boston Tea Party.

A Telling Set of Lawsuits

Prior to his service on revolutionary committees, there is only one well-documented event in his life—although it is one where his personal character shines through.

In January 1741, the court records for Middlesex County describe Whittemore being sued by a Colonel John Vassall. The offense? The Colonel had been chosen to be a Selectman for Cambridge, and Whittemore publicly expressed his opinion that Vassall, “was no more fit for a Selectman than his horse was.” Whittemore was arrested and jailed for a short period of time, but the court concluded his words were not actionable and dismissed the allegations. Whittemore then turned around and counter-sued Vassall for “false and malicious imprisonment.” The court agreed with Whittemore and awarded him 200 pounds in damages.

Although this event is not a strictly heroic one showing Whittemore’s battle prowess, it demonstrates two things about his character: that he was not willing to tolerate men selected for public service whom he felt were lacking in virtue or ability, and that he would certainly not put up with being slighted or accused of libel by such men. The legal matter with Vassall allows us to glimpse the man behind the legend and sets a precedent for understanding why a crippled 80-year-old would try taking on professional killers much younger than himself: Whether dealing with redcoats or a pompous local official, Samuel Whittemore didn’t like bullies.

While he is not quite famous enough to earn his own HBO miniseries like John Adams, or, like Alexander Hamilton, a Broadway musical (though we may keep our fingers crossed here), the status of “Old Sam” Whittemore is greater now than it has ever been at any point in the past. In 2005, a state Senate bill was passed declaring him the official hero of the Commonwealth of Massachusetts. His memory is commemorated every February 3, the day after his death.

Perhaps the best summary of Samuel Whittemore’s life is given in his obituary: “The manly and moral virtues, in all the varied relations of brother, husband, father, and friend, were invariably exhibited in this gentleman. He was not more remarkable for his longevity and his numerous descendants … than for his patriotism.”
And how numerous were his progeny, exactly? Extraordinarily, his obituary places this number at no less than 185 at the time of his death in 1793, including one great-great-grandchild. The figure far exceeds that of his battle wounds, and it arguably represents his greatest legacy of all.