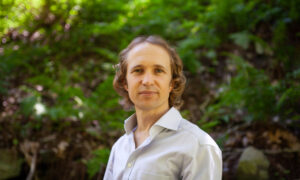 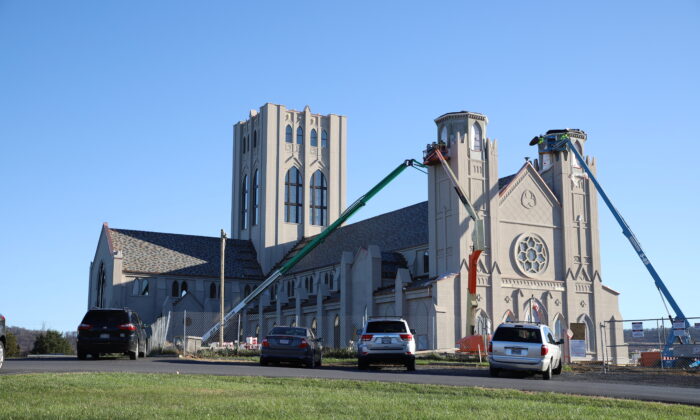 The exterior of the Chapel is nearing completion, with the approximately 100-foot steeples set to be installed this spring. (Christendom College)
Fine Arts & Craftsmanship

The New Christ the King Chapel at Christendom College

Several times I’ve gone into the field—Williamsburg and Jamestown in Virginia, and the Basilica of Saint Lawrence in Asheville, North Carolina—to write for The Epoch Times, but never did I think one of these assignments might kill me.

It was mid-December 2020, and Pat Haggerty, a man in his 40s who is the project manager for the new Christ the King Chapel at Christendom College in Front Royal, Virginia, had decked me out in a construction helmet, bright yellow vest, safety glasses, and for some reason, gloves, to enter the chapel’s construction site. We had completed part of the tour when we reached the “crossing” at the other end of the church. I craned my head up to view the high dome above and saw a narrow walkway beneath it. “Can people walk up there?” I asked.

What in the name of cardiac arrest was I thinking?

Up we went on a narrow, enclosed spiral staircase, up and up, climbing and climbing. At some point, I was nearly down on all fours, clutching the handrail and pawing my way up stair after endless stair. By the time we reached the top, that climb had sucked the wind from my lungs and made a bass drum of my heart. “I hope you know CPR,” this 69-year-old man wheezed.

Pat just laughed, thinking I was cracking a joke. “It’s nine stories,” he said. “It leaves me a little short of breath sometimes too.”

As I stood there, well away from the walkway—heights and I have never gotten along—I caught my breath, felt the banging in my chest subside, and reveled in the magnificence being created all around me.

Christendom College is a small Catholic liberal arts school—it now enrolls about 500 students—and has long needed a new chapel. The old one, which stands at the heart of the campus, is too small to meet the needs of the student population.

About 10 years ago, the school’s president, Dr. Timothy O’Donnell, and some others began making plans to build a new chapel to accommodate the growing number of students. Originally, these planners considered tearing down the old church and erecting a new structure on that site, but complications with that plan led to this new location, which Pat explained was the highest point on campus.

The site work for the church began in the spring of 2019, and construction commenced in September 2019. By the time of my tour, workers had completed most of the exterior construction, with the exception of certain towers, parking lots, and landscaping. The target date for opening the doors to students and faculty is April of 2022.

As Pat led me on this excursion—“You’re tour number 101,” he told me—his knowledge and his recitation of certain statistics blew me away. The roof, for example, will contain 42,000 pieces of slate. The organ will have 2,800 pipes. The towers will contain 12 bells—the largest weighs 1,400 pounds—which the college chaplain, Father Marcus Pollard, has already blessed in a special ceremony. Stained glass windows, 115 of them, will grace the walls of this gem, containing 8,000 pieces of handblown French and German glass.

The new chapel will hold 840 people and will seat 540 in the pews, whereas the maximum capacity of the older church is 380.

Treasures From the Past

As we made our way through this church under construction, Pat again and again pointed out how many pieces of art and furniture came from shuttered churches up and down the Eastern Seaboard. Some of the bells, many of the stained glass windows, and pews from the 1850s were “rescued” from other churches.

“How do you find these things?” I asked him.

“Oh, there are brokers now who deal with closed churches,” he said, which is sad news for churches but of benefit to places like Christendom.

The new building will also hold some local objects as well. Black walnut from trees on the campus will be used on part of the floor, and the heap of large stones dug up during the early site work—the church has no crypt, or basement, because it sits on stone—will be used in exterior decoration.

Three college alumni are also mixing their artistic talents into the building. According to “Alumni Artisans Contribute to New Christ the King Chapel,” an article in Instaurare (the Latin name of the college’s magazine means to build, to renew, and to restore), Michael Schmitt, Mandy Hain, and Corey Morgan wanted “to contribute to the chapel through their artistic talents, giving back to their alma mater in a significant way while also assisting in an ecclesiastic project that would impact lives for the better.”

Following the traditional practices of the Middle Ages, Schmitt put aside a stone blaster and used a mallet and a chisel to hand carve “HAEC EST DOMUS DEI ET PORTA COELI,” meaning “THIS IS THE HOUSE OF GOD AND THE GATE OF HEAVEN,” across the 24-foot-long panel over the entrance to the church. “The panel should help create a special and sacred aura at the chapel,” says Schmitt. “It’s a signpost, so to speak—it points to God.”

Morgan, an experienced artisan in woodworking who has contributed to several other area churches, is working on arches, side chapels, confessionals, and the altar in Our Lady’s Chapel behind the main high altar. In the article, Morgan speaks of how meaningful it is to give glory to God through the work of his hands, adding: “It is also incredibly special to be able to give something lasting back to the college, literally one of the fruits that I gained while in attendance there, namely my love of faith, and the inspiration to pursue the very life of craft I am living now.”

Mandy Hain has also worked in beautifying churches. In this case, she has added the gold gilt to the inscription carved by Schmitt and is creating artwork for the ceiling of the chapel, including the part I viewed after my death march toward the heavens. (When Pat informed me that Hain had painted this cupola another couple of stories above us, my one thought was: “Better you than me, kiddo.”)

Other Christendom College graduates have also given time and talent to this project.

‘Art Is the Grandchild of God’

Those words above, from Dante, kick off the Instaurare article.

During our tour, Pat remarked that the creation of such a building in this day and age is amazing for a college this size. After seeing the efforts made to bring beauty to a building and to give glory to God through architecture, I agreed with him, though the use of “chapel” to describe this church seemed understated. “Cathedral” might better describe this edifice, though no bishop sits here.

I’ve left out a dozen more details from my tour, but here is a final example of the care and thought put into this creation. When Pat took me to the choir loft, which is above the entranceway, I asked him whether they’d experienced any problems with acoustics. He explained that a single layer of drywall in such buildings can do harm to the quality of the sound, and went on to tell me they had therefore installed in the choir loft three layers of drywall glued together and two layers throughout the rest of the church. They then brought in some members of the Christendom College choir, had them sing, and found that this tactic worked.

Near the end of my tour, Pat Haggerty remarked, “We’re really pleased with the team we’ve put together—the architects, the artists and engineers, and all the others.”

“Beauty will save the world,” so wrote Dostoevsky. Is that true? Can beauty really redeem our fallen humanity?

Of that I am uncertain, but I do know that Haggerty’s team is teaching the rest of us a lesson. Their efforts and care in this construction of Christ the King Chapel clearly demonstrate that we are still capable of constructing beautiful buildings, that we can merge the treasures of the past with the talents of the present, and that as Mandy Hain says: “Beauty is not an accessory. It is a necessity that has transformative, healing, and encouraging power. It brings us to its source and makes us better without effort on our part.”

Except when climbing those nine stories of stairs. Now that took some effort.

You can find pictures, descriptions, and tours of Christ the King Chapel on the Christendom College website, at Chapel.Christendom.edu