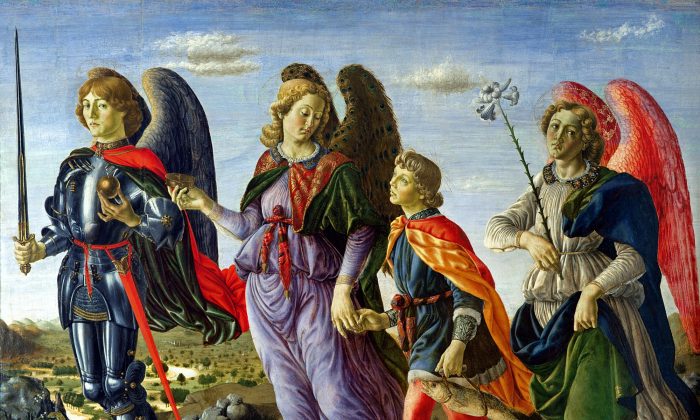 Michael, on the left, with the archangels Raphael and Gabriel. “The Three Archangels and Tobias,” 1470, by Francesco Botticini. (Public Domain)
World Culture

The Myth of St. Michael and What It Tells Us

Contained in the myths and stories of the distant past are nuggets of wisdom and ideas that we have forgotten, and failed to see how important they are. One such myth is the story of St. Michael.

Why Michael was accorded sainthood is, frankly, odd, as he is not a human being. Rather, he is the “great prince of all the angels,” and one of the four archangels (Raphael, Gabriel, and Uriel) who, along with Michael, face respectively east, west, north, and south. In other words, they cover the earth with their influence.

But the key thing to grasp about “him” (and not forgetting that angels are traditionally sexless) is that he is the supreme archangel, that he heads the heavenly host, and that in the book of Revelations he leads the fight against Satan. Moreover, in the more esoteric tradition of angelology, there are nine levels of angels, and those in top tier of these, called the Seraphim, are the most powerful because they are nearest to God.

Put another way, then, what we can say about Michael (dropping the title of saint) is that he is, under God, the most powerful of all beings that God created, excepting possibly, but not certainly, the angel of light, Lucifer, who fell and became Satan.

And, unsurprisingly, according to Catholic teaching, the first responsibility of Michael is to combat Satan, which suggests comparability between them. Given this, what does the name Michael mean?

Michael is Hebrew for Mikha’el meaning “Who is like God?” This is a rhetorical question, and in the rhetoric we discover the meaning of the myth. For imagine it: You have been created the most powerful, charismatic, and dynamic being in the cosmos, and what do you reflect upon? How wonderful, powerful, charismatic, and dynamic you are? Closet narcissism? No, what your whole being is explicating as it takes stock of itself is that there is a gulf, a void, a universe even, between you and that transcendent reality that has no name; or says, almost as a throwaway name, “I am that I am.” That is to say, is Being itself.

Immediately, one is aware that one is nothing compared with that transcendent, nameless reality. What the Creator is, is something far beyond created things, and in contemplating the Creator—as Michael’s name suggests—one can only adopt a profound humility in response, for anything else would be plain silly. As silly, for example, as trying to impress God: as if God is one day going to say, “Hey, Josh, that’s a great singing voice you have; I wish I could sing like that,” or “Hey, Joanna, what a great negotiator you are; I wish I could make multimillion dollar deals like you!”

And if these two examples sound especially silly, think about it: How often are we actually seeking to impress the universe with what we do?

But more importantly, there is a further point here. For the question “Who is like God?” actually resonates in all religions and in wholesome secular practices too.

We are all being asked to be like what? Admirable role models all the time. Indeed, we can only grow from having great models that we want to be “like.”

Christians, for example, are enjoined to be like Christ or to put on the mind of Christ. Buddhists want to be like Buddha. And on a secular level, we have schools, universities, government, armed forces, businesses, and all sorts of other organizations in which to progress is to become “like” the ideal role models within them.

Carl Rogers thought the self-concept—the very core of our self-identity—had three distinct subcategories: our self-esteem (how we feel about our self), our self-image (how we see our self), and our ideal self (how we want our self to be).

Clearly, the ideal self has this future orientation in which we become either somebody else (a distortion of our true self) or who we were meant to become (our true self). In the latter case, the acorn becomes the oak tree. For this to happen, the process starts in childhood.

Children in a functional family seeks to be “like” their mother or their father, or both, in certain and distinct ways. Without adequate role models (and hence, too, mentors to guide us), we cannot develop, because we cannot see what we could become.

And nowhere is this more acute than in the world of myths and religions, for here the promise before us is to become “like god/God” or “godlike.” The destiny of human beings is to become godlike, and this paradoxically begins when we see the gap between what we are now and what we might be like, as in “Who is like God?”

If we were truly godlike humans, what would that look like, based on the scriptures from which Michael emerges?

Essential Qualities to Model After

I think there are three essential qualities that speak to our own self-concepts that are godlike.

First, freedom. God is free. We want to be free, and this magic occurs when what we want to do corresponds exactly with what the universe, the Tao, God demands of us. This would be shaking off the shackles of addiction and compulsion because we could choose to live another way.

Second, understanding or wisdom. This is not an academic qualification or title, but a profound insight into how the cosmos operates, and the ability to work in harmony with it. Naturally, as with freedom, there is a moral dimension to wisdom for it to be wisdom. The Old Testament said it this way: “Those who hate me [Wisdom] love death.”

Third, and finally, love or compassion. Why? Because to be godlike, we would see the beauty of the whole creation, its interconnectedness, its intricacy, its amazing qualities, and to see such beauty everywhere and all around us would be to love it. And, of course, the love would be freely given from our hearts because seeing it would enable us to feel it, and so to care.

Thus, Michael’s name opens us up to this incredible story as it contrasts us with the Transcendent reality, and in the falling short, we find that we can become more.

This may sound a hard sell or even a hard road to travel, but let’s not forget it is for Michael too. The Seraphim have six wings, one pair of which is permanently folded across the eyes to shield them from being blinded—by looking into the sheer intensity of absolute reality.