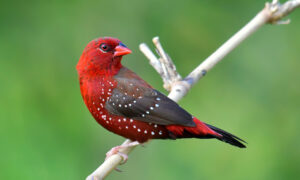 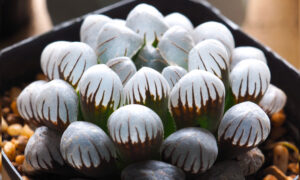 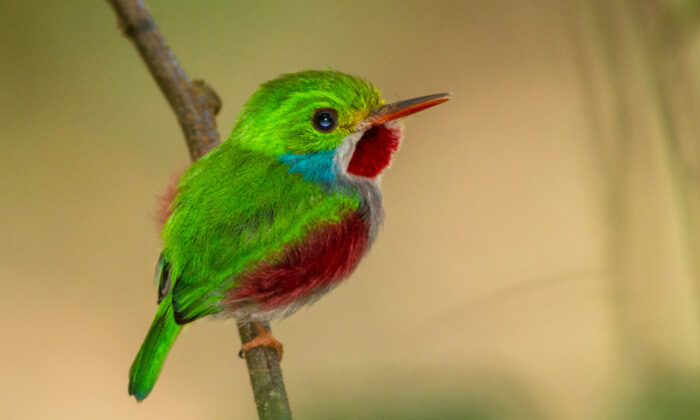 The chubby little Cuban tody could be taken as one of the serious contenders for the title of the most beautiful bird, and why not? This bird may be tiny, easily fitting in an adult human palm, but what it lacks in size, it makes up for in sheer color.

The Cuban tody, scientific name Todus multicolor, boasts a shimmering leaf-green upper body and a bright-red throat with a dash of blue on its side.

Describing the tiny bird’s beauty, narrator Michael Stein says in the Audubon Society’s podcast “Bird Note” that the Cuban tody is a “bird that’s almost indescribably cute, and the top of the must-see list of any birder heading for the West Indies.”

The Cuban tody really is tiny, with a body that weighs around 6 to 6.5 grams (approx. 0.21 to 0.23 ounces) and barely measures more than 10 centimeters (approx. 4 inches), which makes it the size of a large hummingbird. This bird has a large head and a long, flattened bill that is black on top and red on the bottom, perfect for feeding on insects.

Classified under the Todidae (Tody) family, as its name indicates, the bird is endemic to Cuba. Neighboring islands such as Puerto Rico and Jamaica have their own toddies, which share the green back, red throat, and white breast, but don’t have the extra colors of their Cuban counterpart.

Although it’s only found in Cuba and adjacent islands, the tody covers the whole of the island from east to west, ranging from the cooler mountain forests to the steamy tropical lowlands. Interestingly enough, the bird can often be found in multispecies flocks that roam in search of food.

Feeding time can be any time, as the tody loves to devour insects. In a pinch, it can eat small lizards, fruits, and arachnids to supplement, and can even feed on mosquitoes, gnats, and flies.

The Cuban tody isn’t just unique in appearance; it also has a very intricate system for reproduction. Of course, would-be male suitors are keen to show off their bright-pink flanks to the females and also like to puff their little frames to make themselves look more impressive.

Their eggs are the smallest of the Todidae family and very fragile. To help protect them, the birds lay them inside an egg chamber dug in the mud or else inside a rotting tree trunk. Male and female mates take turns sitting on their eggs to help them hatch.

Cuban todies can be difficult to spot in the wild, but they do have a distinctive sound that gives them their local name “pedorrera” (breaker of wind). When they flap their wings, they make a mechanical sound, and although they aren’t big singers, their call comprises distinctive notes of “tot-tot-tot,” and the musical whistle “pprree.”

The Cuban tody is listed as a species of “Least Concern” on the IUCN red list, but like todies on neighboring Caribbean islands, its population is diminishing due to development and habit destruction.