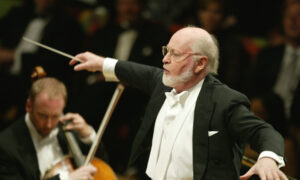 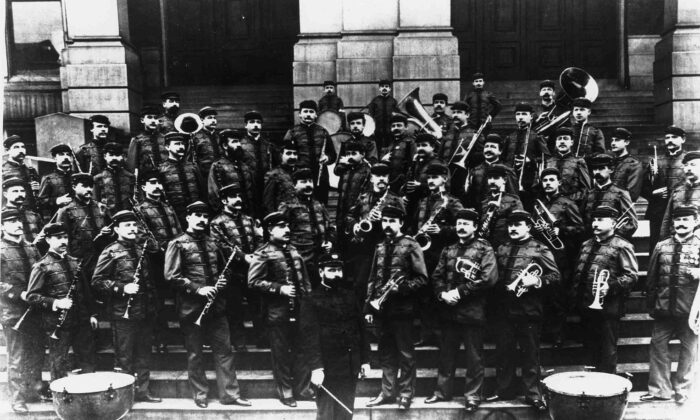 A hundred years ago, the name John Philip Sousa on a concert program brought out music-loving crowds from all over the United States and around the world. From the time he founded his own band in 1892 until his death 40 years later, Sousa defined the sound of American concert music.

That sound persists today in the form of the distinctively American march. Take a bright blend of woodwind and brass at 120 beats per minute, topped with melodies that might—and in some cases actually do—come from a tuneful operetta, and you have the essential Sousa march.

Sousa marches dominate national holidays. Try thinking of an American celebration such as the upcoming Memorial Day without “The Stars and Stripes Forever.” It’s like imagining Valley Forge without George Washington.

John Philip Sousa was born in Washington, D.C., in 1854 to a father of Portuguese descent and a Bavarian-born mother. His father, a trombonist in the U.S. Marine Band, secured lessons in voice, violin, and the major wind instruments for his son, who repaid him at age 13 by attempting to run away and join a circus band.

Sousa’s father promptly placed young John as an apprentice to his employer. For eight years, the young Sousa learned to master the instruments of the wind band while absorbing their intense tonal colors. His later skill in exploiting the characteristics of woodwind and brass instruments in combination dates to these formative years.

Completing his apprenticeship at age 20, Sousa took off to make his mark as a young violinist and conductor. A love for operetta found him conducting Gilbert & Sullivan’s “HMS Pinafore,” which was new at the time. Among the cast was a young lady whom Sousa would marry, with the couple going on to parent three children.

To this period, we can trace Sousa’s penchant for lilting melodies. Sousa marches don’t just march: they sing. That’s key to understanding their popularity.

His time as a conductor of operettas led him to compose his own, and indeed, Sousa scored 15 operettas during his lifetime. Tunes from the most popular of them, “El Capitan,” make up his march of the same name, but his other marches are often graced by melodies that could very well be a second-act tenor aria or even a love ballad.

These hummable tunes are usually found in the third and last of three “strains” or sections that make up a typical Sousa march, also called the “trio.” The trio for “King Cotton” is a bouncy whistle with a touch of whimsy. For “Hands Across the Sea” it’s a melancholy-tinged anthem. The most famous of them, “The Stars and Stripes Forever,” is a palpable song of devotion.

After five years, Sousa was called back to the U.S. Marine Band, this time to be its director. From 1880 to 1892, he shaped what was an underpaid, underdisciplined group into what came to be called “The President’s Own” military band.

This is the period in which the marches started to flow from his pen—ultimately more than 130, most of the more popular ones dating from between 1886 and 1899. In addition to those already named, those best known today include “Semper Fidelis,” the official march of the Marines; “The Washington Post;” “The Thunderer;” “High School Cadets;” “Liberty Bell;” and “The Gladiator March.” The latter, number 28 chronologically, was the first of his marches to catch with the public.

In 1892, Sousa retired from his position with the Marines to begin his own commercial band. The Sousa Band would flourish for four decades, its popularity reflected in enormously successful American and international tours, earning its leader the label of “The March King.”

As popular as his marches are today, Sousa’s fame in his time was as much due to his ability to program and conduct a dazzling array of music, from opera excerpts to folk songs to waltzes straight from the pens of Europe’s masters. The Sousa band played wind arrangements of Wagner, Tchaikovsky, Liszt, and even Debussy.

Sousa once noted that the difference between an orchestra playing the music of those composers and a wind band playing them is that the orchestra will educate its audience, while the band will entertain them.

In 1896, Sousa was with his wife on a European holiday when he got the news that his business manager had died. Sailing back to the United States, he began to hear a march in his head. Sousa knew it had something to do with going home, with the United States, and with what it meant to him as a first-generation American. He would call it “The Stars and Stripes Forever,” a title aptly given by a man who once described his job as “Salesman of Americanism.”