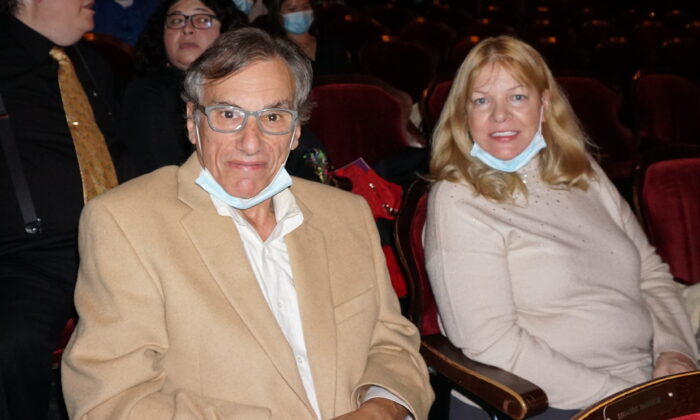 DETROIT, Mich.—Shen Yun, the New York-based classical Chinese performing arts company, may be best known for its colorful costumes and dazzling visual displays. But its music and live orchestra draws in audiences just as much.

Michael Deluca and his wife Audrey attended the Oct. 31 matinee of Shen Yun at the Detroit Opera House.

“I’m enjoying it very much! I love the stories and the songs, and the fusion of Western music and Eastern instruments,” Mr. Deluca said. Deluca is a retired software engineer who used to play piano professionally.

He loved the pianist who accompanied the solo vocalists and the music overall.

Shen Yun‘s orchestra comprises of traditional Western instruments flavored by some key Chinese instruments, such as the pipa, the two-stringed erhu, and the trumpet-like suona. The overall effect is extremely expressive and diverse.

Deluca described the feeling transmitted by the music as a “longing—a sense of unfulfilled longing that’s always beautiful.”

Like Deluca, Glasnak was quite taken by Shen Yun’s music, particularly the erhu, which he’s has first-hand experience with.

“I once had an erhu,” he explained. “I’ve been to China several times and I brought back an erhu and tried to learn it, but it’s very difficult to learn.”

One of the characteristics of the erhu is that it has no fingerboard, requiring the player to manipulate the strings themselves. Despite having only two strings, it is able to convey a wide range of emotions and produce different sound effects, such as mimicking the calls of horses or birds.

Both Glasnak and Lee urged anyone who hasn’t seen Shen Yun yet to experience it.

“I think that the more every person can experience a culture that’s different from their own, the better world we’ll have,” Lee said. “It’s very enlightening, it’s colorful, it’s beautiful, and it makes you think about the past and the present and bringing everything all together.”

“It’s an experience that you will enjoy—a one of a kind experience. You should come see it,” Glasnak said.