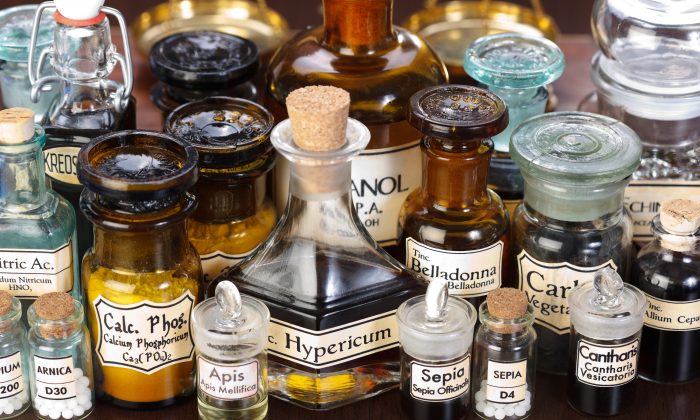 One of the most unique aspects of homeopathy is the preparation of the medicine. Shutterstock Szasz-Fabian Ilka Erika
Alternative Health

The Misunderstood H-Words of Natural Medicine

The words Homeopathic and Holistic have very different meanings.
By Conan Milner

Let’s clear up some confusion. Despite what you may have heard, “homeopathic” and “holistic” do not mean the same thing.

Both words begin with H, and homeopathic medicines can offer a holistic approach to treatment, but the similarities end there.

Homeopathy refers to a system of medicine developed by German physician Samuel Hahnemann in the late 1700s and early 1800s. It is based on the law of similars—a principle of like curing like.

Hahnemann observed that a substance taken in very minute doses cures the same symptoms it would encourage in larger doses. For example, we all know what happens when poison ivy is rubbed on the skin. A homeopathic preparation of poison ivy (Rhus toxicodendron) is used to address symptoms such as rashes, itching, and redness.

This concept stretches back to earlier herbalists such as Paracelsus and Hippocrates, and emerges from the same ideas that spawned vaccination. But Hahnemann’s system has characteristics all its own.

One of the most unique aspects of homeopathy is the preparation of the medicine. It starts with an extract called a mother tincture which is heavily diluted and shaken vigorously in a process called succession. Some remedies are so diluted that no trace of the original mother tincture can be detected.

According to Hahnemann, this dilution method brought out vital healing properties of plants, minerals, and other substances, and removed their harmful aspects—leaving behind a gentle yet effective medicine.

Hahnemann believed every disease had a corresponding remedy, and his collection of remedies grew through a practice called proving. Hahnemann and his dedicated students would personally ingest full strength mother tinctures and carefully observe their reactions, recording both physical and emotional complaints. This gave doctors the insight necessary to match an appropriate remedy with the full symptomatic picture of a patient.

As homeopathy developed, more remedies were proved and the descriptions became increasingly detailed and specific. Austrian-born Dr. William Boericke, a famous homeopath practicing in San Francisco at the turn of the last century, is still celebrated for his proving documentation. Boericke’s “Homeopathic Materia Medica and Repertory” remains a trusted resource to this day.

The concept of holism refers to a sense of perspective, one that favors the big picture over little details. Holistic cures are ones which address not only physical symptoms, but imbalances of the mind, and spirit as well.

Holistic is often used to refer to natural or alternative forms of medicine. While this may at times be true, natural remedies can also be applied without holistic consideration.

Take for example a patient with digestive distress. Peppermint can help ease stomach upset, but if the patient still observes a poor diet, or is unable to manage stress, peppermint itself does not address the root cause of the indigestion.

Ancient Chinese medicine can be called a holistic practice because it’s designed to target the root cause. For example, if a patient exhibits low energy, sluggish digestion, and obsessive thoughts, a good treatment would address the underlying cause: spleen qi deficiency.

The roots of Hahnemann’s “like cures like” philosophy can be seen in some ancient herbal practices. But other herbal traditions affect cures by way of opposites. For example, hot herbs like ginger or cayenne are often used to treat cold conditions that can manifest as slow digestion or poor circulation.

So is homeopathic medicine holistic? That has been a matter of debate since Hahnemann’s time.

Homeopathy had fierce opposition from virtually the moment it emerged (mostly because it was much less expensive than conventional treatment) and it is still viewed with great suspicion in modern American medicine. However, homeopathic remedies are well regarded throughout Europe and India.

Classical homeopathy takes a decidedly holistic approach. In this practice, a doctor strives to find the one remedy that best fits the character of the patient’s problems.

For example, several different homeopathic medicines can be used to treat a headache. But if the patient also exhibits, according to Boericke, upper lip swelling, hideous hallucinations, and “throbbing and beating pain deep in ear, synchronous with heart beat,” then homeopathic Belladonna is the correct choice.

While some doctors still practice classical homeopathy, Hahnemann would certainly scoff at modern applications of his medicine. Even in his time, Hahnemann differentiated between the “purists” who fully adopted his system, and the “half-homeopaths” who incorporated diluted remedies, but did not incorporate his underlying philosophies.

Hahnemann referred to these half-hearted practitioners as “amphibians” who creep “in the mud of the allopathic marsh” and “only rarely venture to raise their heads in freedom toward the ethereal truth.”