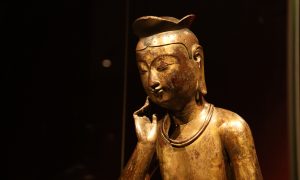 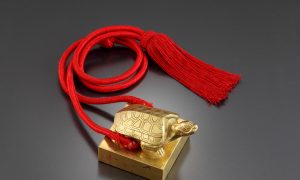 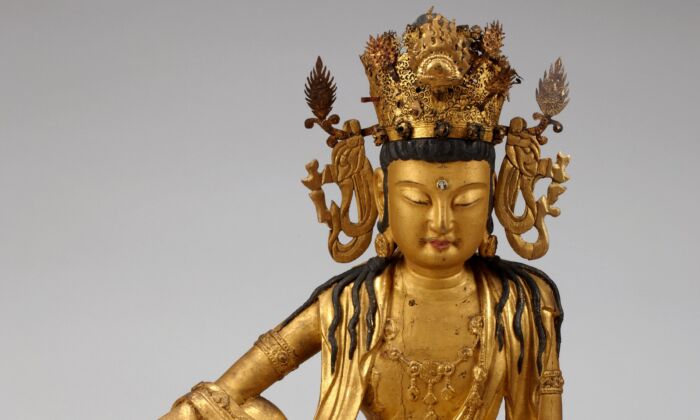 The Merciful Deity Bodhisattva Avalokiteshvara at the Smithsonian

Life can be hard. When faced with fear, crisis, and hardship, some Buddhists call out to Bodhisattva Avalokiteshvara for help. Avalokiteshvara immediately responds by bestowing fearlessness, according to Chapter 25 of the Buddhist scripture known as the Lotus Sutra.

Stated in the same chapter:

He rains down sweet dew and Dharma rain,
Which extinguish the flames of affliction.

Dharma refers to the Buddha’s teachings that Buddhists believe to be the universal, eternal truth.

The Lotus Sutra mentions 33 different forms of Avalokiteshvara: male or female, human or nonhuman. Avalokiteshvara could be anyone from a god to a layman, a king to a beggar, an elder to a youth, or even a heavenly dragon, and all manner of spirits. Whatever form Avalokiteshvara takes is always the best for the situation at hand and the spiritual growth of the being seeking help. Bodhisattva Avalokiteshvara is known as the bodhisattva of infinite compassion and mercy.

Bodhisattvas such as Avalokiteshvara are on earth solely to save living beings from the pain and suffering that comes from being bound by the cycle of birth, life, and death—a cycle that Buddhists call samsara. Just as a mother selflessly puts her children’s needs before her own, so does the bodhisattva put the needs of all living beings first. As a high spiritual being, a bodhisattva has only one lifetime to undergo before obtaining the state of a supreme Buddha. And during that lifetime, the bodhisattva vows to attain enlightenment (spiritual awakening) in order to help others, a selfless act that Buddhists call bodhicitta.

Buddhists believe they will receive the blessings and protection of bodhisattvas by reciting mantras and bringing offerings to them at temples.

The name of Bodhisattva Avalokiteshvara changes from country to country, but each represents the same deity. Many may be familiar with the Chinese name Guanyin. In Korea, Avalokiteshvara goes by the name of Gwaneum.

A Korean 13th-Century Sculpture of Gwaneum

Right now, a rare sculpture of Gwaneum can be seen up close at the Smithsonian’s National Museum of Asian Art. The devotional figure is on loan from the National Museum of Korea, in Seoul, and can be seen in the exhibition “Sacred Dedication: A Korean Buddhist Masterpiece” at the Freer Gallery of Art and Arthur M. Sackler Gallery.

Glistening from head to toe in gold, the wooden Gwaneum is carved, swathed in jewels and a simple silk robe, and topped with a stunning metal crown intricately rendered with lotus flowers, bejeweled flames, and wooden ribbons that seem to flutter. A jewel on Gwaneum’s third eye, between and slightly above his eyebrows, denotes one who sees with enlightened vision, that is, can see beyond our physical plane.

He sits almost nonchalantly with his left foot extending directly toward us and his right leg bent, raised to hip height and extended out to his side: a pose called rajalilasana—Sanskrit for royal-ease pose.

Not only is this Gwaneum the oldest known gilded wooden figure in an informal pose, but it also has a crown. To find a bodhisattva sculpture and crown surviving together is rare.

In the painting, the bodhisattva is helping Sudhana, a young pilgrim, shown at the bottom left of the picture. The scene is from “Entry Into the Realm of Reality” in the Flower Garland Sutra, where Sudhana meets Avalokiteshvara as one of the 53 teachers that Bodhisattva Manjushri has told him to find on his path to enlightenment.

In the painting, Avalokiteshvara is adorned with jewels similar to those of the wooden Gwaneum, but in the hanging scroll, Buddha Amitabha is clearly painted on Avalokiteshvara’s crown, something missing on the figure. On the gilt-wood Gwaneum, an empty space can be seen on the crown where it’s believed that the Buddha would’ve been secured on a separate metal plaque.

Avalokiteshvara is painted sitting on the rocky outcrop of his celestial home at Mount Potalaka, which some believe could be an island off the coast of West India. If the place sounds familiar, it’s because the Dalai Lama’s home Potala Palace in Tibet is named after Potalaka. Tibetan Buddhists believe that each Dalai Lama is the reincarnation of Bodhisattva Avalokiteshvara.

The exhibition also presents in-depth research about the figure from the National Museum of Korea, including how the figure was made and the dedication objects found inside.

Buddhists practice consecration ceremonies, which they believe invite the spirit of the enlightened being onto the figure being dedicated.

Inside the Gwaneum figure are two sets of dedication objects: One set dates from when the figure was made in the 13th century, and another set is from some 200 years later. Items inside include woodblock-printed Buddhist texts in Sanskrit, and objects symbolizing the Buddhist concept of the universe.

Some of the offerings inside are incomplete; perhaps their removal was deliberate in order to protect heavenly secrets at the time the figure was taken from the temple and out of worship.

As consecration is such a solemn practice, the laying out of these pieces from their revered context somehow undermines the exhibition’s aim to present how Buddhists once revered their beloved bodhisattva. For many Buddhists believe now, as they did then, in Bodhisattva Avalokiteshvara’s ability to relieve suffering. In the words of the Lotus Sutra:

That for those who hear his name or see him,
And who are mindful of his name unceasingly,
He can extinguish the suffering of all realms of existence.

To find out more about the “Sacred Dedication: A Korean Buddhist Masterpiece” exhibition, which runs through March 22 at the Freer Gallery of Art and Arthur M. Sackler Gallery, Smithsonian’s National Museum of Asian Art, Washington D.C., visit Asia.Si.edu