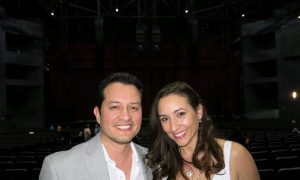 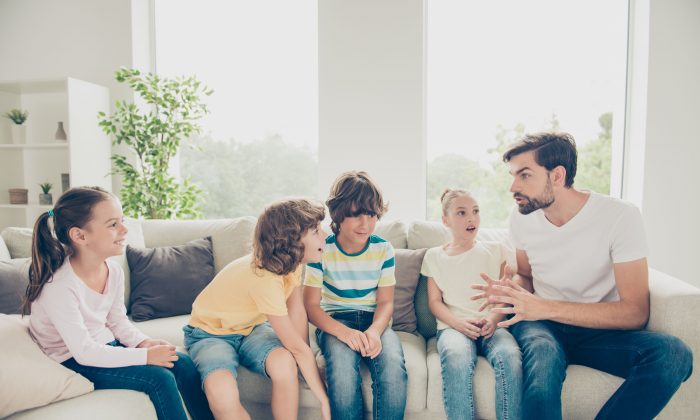 Sharing stories is a lost art that is easy to reclaim. It can help stimulate the mind and bring friends and family closer together. (Roman Samborskyi/Shutterstock)
Life & Tradition

The Mental Powers of Storytelling

We all enjoy hearing a good story. But a tale is more than just entertainment.

Teachers at the UCLA Lab School have found storytelling so important to the learning process that it’s become an essential feature of the classroom.

The UCLA Lab School is unique because it encourages teachers to test-drive various educational techniques with a very diverse group of students. Over the past 20 years, a storyteller has come to visit the Lab School once a week. Teachers say it’s the fastest way to teach younger kids to read.

For the past 10 years, professional storyteller Antonio Sacre has provided the tales. His material spans from accounts of his own childhood to children’s classics such as The Three Little Pigs.

“So I come in, tell stories to the kids, and 16 weeks later, whatever metrics they use to measure reading and writing are higher than they were before the storytellers were there,” said Sacre. “Now, the teachers work super-hard and I’m one small component in that, but it’s a crucial component.”

Before his gig at UCLA, Sacre was sharing stories in classrooms across the country and around the world. In his experience, telling tales can hold a child’s attention as nothing else can.

“I started telling stories in schools a long time ago before everyone had handheld devices,” he said. “What I was seeing was that kids were sitting and listening in a way that teachers were telling me they didn’t normally listen.”

The Story Inside Us

A story is a sequence of events that lead to a conclusion. It’s typically driven by some kind of conflict or some unattainable desire. Details give life to the characters, and their experiences give us insight.

Storytelling has always been mankind’s primary teaching tool, but the form itself may facilitate learning. Once we get into a story, we’re pulled along by the promise of hearing how it will end. This gravitational force makes a story an ideal vehicle for us to conceptualize and retain information. We can handle a bland list of bullet points, if necessary, but we would much rather hear about a character on a quest.

Modern researchers believe it’s because our brains are hardwired for narrative. Brain imaging studies have shown that specific parts of our brain only become active when we’re listening to stories. Storytelling has also been shown to trigger the release of oxytocin, a neurochemical that enhances our sense of empathy.

Sacre believes that what makes stories such an effective method for transmitting information is because we identify with the characters’ struggles. We’re not just passively listening; part of us gets to live the story being told. The tale may contain fictitious people from fantastic worlds doing impossible things, but once we fall under the story’s spell, we become a part of that world.

“We get to see ourselves in these stories, and that’s really complicated brain work,” Sacre said. “We get to be the lion and the person being chased.”

This is why many old stories still endure: because they speak to the same dramas that still dwell inside of us. Sacre says he’s been rediscovering some of the lesser-known fairy tales from the Brothers Grimm and Hans Christian Anderson canons. The kids love them, and will often request that he tell more “magic stories.”

Movie in Your Mind

Stories have been told long before the written word. It’s a practice as old as humanity itself.

Every culture throughout time has been built upon a framework of key stories that describe its origins, provide codes of conduct, and supply a sense of right and wrong.

Today, our appetite for stories is stronger than ever. We still tell ancient tales, and new narratives are constantly being spun for our enjoyment.

However, these days we consume most of our stories through a visual medium: videos, television, and movies. Sacre doesn’t disparage these formats, but he says they lack something that only a story told with words can deliver.

For example, when kids hear about a ferocious lion running through the forest, they all see different scenes in their mind. One child might picture palm trees and a yellow lion with a brown mane. Another may see a tan lion with an orange mane charging through the evergreens.

Each child creates his or her own movie as they’re listening to a tale, weaving their own sensibility in between the spaces of the words.

A movie, by contrast, provides a more homogenous and passive experience and does much less to challenge our minds.

“The brain is super-active when you’re listening to a story. But if we go see the Lion King, we’re all going to see the exact same lion,” Sacre said. “We’ll all see the same scenes, hear the same music and the same famous actors reading the parts. It makes us forget our own stories.”

Sacre says older kids can take longer to get into the stories than younger ones, but they eventually make an impact. Many of us can recall a favorite teacher who told stories that stick with us long after the rest of our school experience has faded from memory.

But parents and teachers often shy away from any kind of storytelling today. They may be tight on time or feel that there are too many other choices competing for everyone’s fractured attention. In comparison to smart whiteboards, tablets, and interactive video games, a simple story seems dull and old-fashioned.

“I feel that many parents and teachers have just thrown in the towel. They can’t even do it,” Sacre said. “What I think is happening is this: The connection is broken when parents are looking at the screen. I’m one of those parents, too.”

Once the screens are put away, how do you connect? In addition to fairy tales, Sacre likes to share more personal tales, too. He talks about growing up bilingually in a Cuban and Irish-American household and shares details about how the world was different when he was young. He tells kids how playground slides were once made of metal instead of plastic, and music used to be heard on cassettes instead of iPhones.

They may not seem like much at first, but even sharing small, personal anecdotes can have great power. They can awaken the stories in others. These tales are special because can’t be found on the internet, and they provide a sense of intimacy that Hollywood blockbusters can never recreate.

Sacre was with a group of friends on the beach recently, when someone was reminded of the first time he saw his grandfather cry. All of a sudden, everybody started sharing stories of their grandparents.

“Now, if he didn’t do that, or if we were all looking at our phones and doing whatever, we would have missed this really wonderful opportunity,” Sacre said. “Thousands of people and millions of dollars are spent on the latest X-Men or Avengers movie, but they can’t compete with us. There’s no way Marvel Studios is going to tell the story of that grandfather crying and make the five of us on the beach have this massive discussion.”

Stories like this allow people to connect, to understand each other, and to feel more deeply the origin of each person’s unique character.

We resonate with the stories of those closest to us in particularly profound ways. A 2015 study done at Chicago’s Northwestern Hospital and published in the journal Neurorehabilitation examined the power of personal stories on two groups of coma patients. One group heard stories about their family members on headphones told by a recording of a close relative (actual stories—not idle chit-chat or reading the newspaper). The control group just received standard medical care.

Of course, you don’t need an MRI to realize the value of sharing stories with the people you’re closest to. You just need to be willing to make a connection.

“Storytelling is considered folk art, not fine art. Everyone can do it,” Sacre said. “If we can get over ourselves and just tell our story, most of the time, you’re going to tell something that is meaningful to somebody else.”