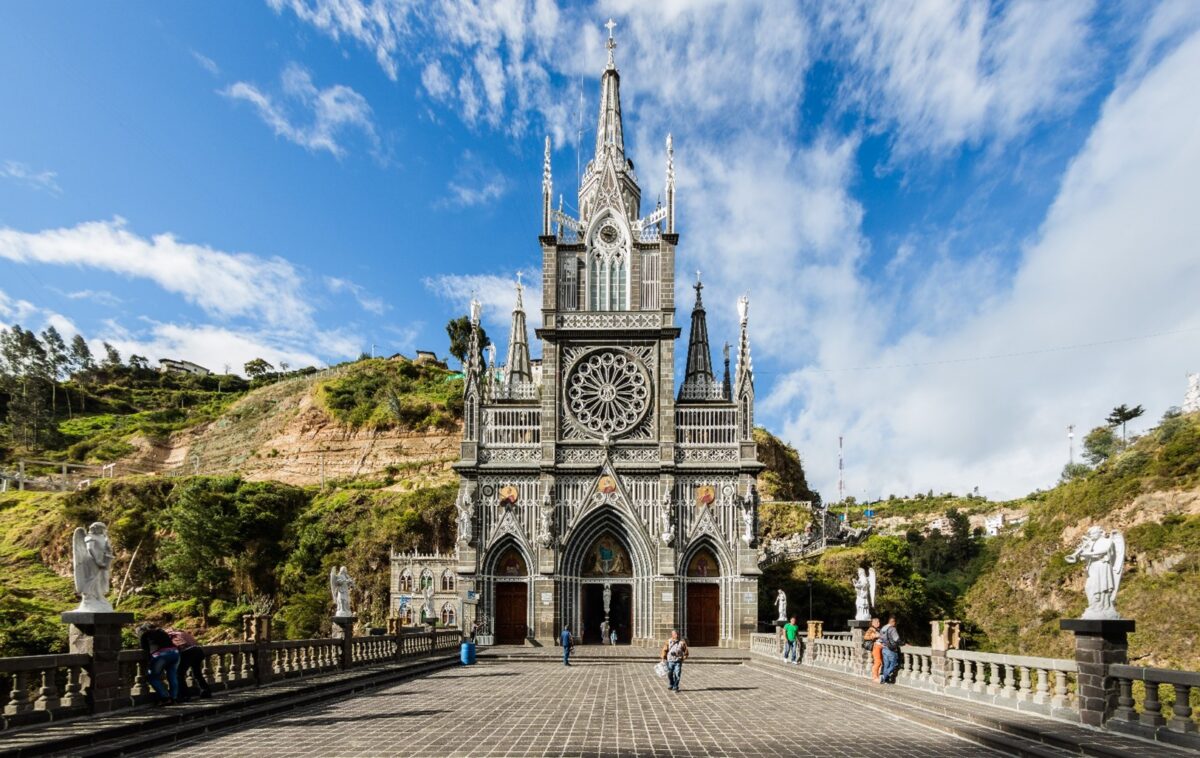 The church of Las Lajas, one of the most beautiful in the world, is built right into the Guáitara Canyon near Ipiales, in Nariño, on the Columbia-Ecuador border. Its impressive entrance is 150 feet above the canyon. It boasts Gothic arches and a cross on its spire. These are typical elements of the Gothic revival style, inspired by European churches. (Diego Delso/CC-BY-SA 4.0)
Arts & Tradition

Larger than life: Art that inspires us through the ages
BY Ariane Triebswetter TIMEJuly 19, 2022 PRINT

Inside the canyon of the Guáitara River in Colombia, South America, rests a breathtaking example of Gothic revival architecture: the Las Lajas Sanctuary. This popular spiritual destination celebrates the reputed appearance of the Virgin Mary at the site.

In 1754, a woman named Maria Muneses de Quiñones and her mute-deaf daughter Rosa were caught in a storm, and found shelter in slabs of “lajas,” a variety of local shale, in the Guáitara River canyon. In the refuge, Rosa supposedly exclaimed that she saw the Virgin Mary above one of the slabs. A series of miraculous reports followed and, in the same year, a simple shrine from wood and straw was built.

In the 1800s, further additions were made: a bridge, a brick chapel, and an artificial waterfall that still flows to this day. The current church, funded by local donations, was built between 1916 and 1949 by two Ecuadorians, engineer Gualberto Pérez and architect Lucindo Espinosa. The unusual setting and architecture of Las Lajas makes it one of the most beautiful examples of Gothic revival architecture in South America.

The church, inspired by European Medieval religious architecture, has typical Gothic revival elements including a vaulted ceiling, spires (pointed structures on top of the church tower), and buttresses (structures that support the walls), as well as tracery (architectural ornamental work) made of stone, and multiple decorative elements. The church rises 330 feet above the canyon’s floor; a 160 feet tall bridge connects to the opposite side of the canyon.

In 1953, the church got canonical recognition and was appointed to be a small basilica in 1994. The Gothic revival architecture of Las Lajas still inspires visitors and pilgrims to this day.