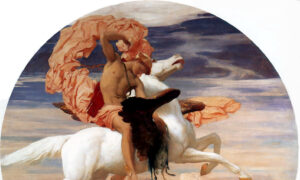 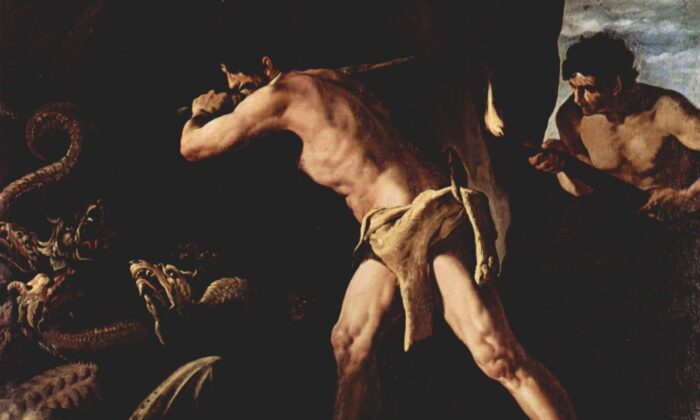 The Hydra of Modern Times

The myths of the ancient worlds, as we have discussed before, have profound truths and insights to tell us now, if we would but listen to them. One that I find particularly relevant at this present juncture of history is the story of the Lernaean Hydra, or just the Hydra.

To recall, the Hydra was a snake-like monster who in the most authoritative sources had nine heads, one of which was immortal. On top of that, the creature’s breath was a lethal poison and it spat a venom so deadly that there was no cure for it.

The Hydra was the offspring of the loathsome monster Echidna, who mated with the even more ferocious Typhon. It was Typhon who almost defeated the king of the gods himself, Zeus, and in doing so would have destroyed the whole created order if it had been successful. The Hydra lived beside Lake Lerna, guarding an ominous gate leading to the underworld.

Thus, it comes as no surprise that just as the king of heaven had fought and defeated the Typhon monster in the upper world, so here below on earth, it fell to his son, the human hero Hercules, to defeat Typhon’s offspring, the Hydra. This came about as a result of Hercules’s second Labor.

Hercules was ordered by the treacherous and weak king Eurystheus to destroy the Hydra, although Eurystheus’s real objective in setting all 12 of the famous Labors of Hercules was for Hercules himself to be destroyed, for each of the Labors became increasingly difficult, if not impossible to achieve. But, of course, Hercules was half human and half divine; his father was Zeus. This was no ordinary man!

But even being half divine proved not quite enough for Hercules to overcome the Hydra, at least on his own, for as he cut off or clubbed each head to death, another two would sprout in its place. The Hydra thus became more powerful, and Hercules had to retire.

Fortunately, however, Hercules was accompanied by Iolaus, his nephew, and together they resumed the fight. As Hercules destroyed one head, and before it could regenerate into two, Iolaus would sear the neck stump with a red-hot brand and thus prevent its growing again.

Eventually, as one head after another died, the creature also did, leaving only the immortal head. This Hercules chopped off and buried by the roadside. The Hydra, then, was defeated and dead.

So what is the relevance of this story for us?

The Many-Headed Serpent of Science

The Hydra, I think, is symbolic of mankind’s efforts (often monstrous!) to solve its problems. We might call this our philosophy of “progress,” and in particular this problem-solving via science and technology.

Reading a key story in today’s (Jan. 18, 2021) The Epoch Times, I find a perfect illustration of what I mean: The paragraph reads: “Officials in Norway said they are investigating the deaths of about two dozen elderly patients who received the Pfizer/BioNTech vaccine and are looking into the prospect that adverse reactions to the vaccine ‘may have contributed to a fatal outcome in some frail patients.’” We create a vaccine to save lives, but immediately the opposite occurs—another head of the Hydra pops up, just when we thought we’d nailed the problem.

The particulars of the above case are not significant here—it may be on investigation that they all died of food-poisoning! But this result is typical of the Hydra’s manifestation: a law of unintended consequences, in fact. And not only unintended, but unforeseen too. As G.K. Chesterton observed, “Science invents conveniences by design and inconveniences by accident.”

Even, apparently, the creation of self-evidently brilliant new technology, on reflection, seems to carry a sting in its tail, or to continue our metaphor, generate a new Hydra’s head that attacks us somehow. For example, who could argue that the invention of the alphabet and writing was a great new technology? Have we not been the beneficiaries of its power ever since? Indeed, without it, it is difficult to conceive of how any learning, much less science, could ever have evolved.

Yet it was Socrates, in Plato’s “Phaedrus” (circa 370 B.C.), who said: “The discovery of the alphabet will create forgetfulness in the learner’s soul, because they will not use their memories; they will trust to the external written characters and not remember of themselves.”

Of course, it may be thought now that the weakening of the memory is a small price to pay for the ability to be able to write, record, and transmit information to posterity in the way that writing has enabled. But the trouble is, whereas there are very small Hydras, there are also very large ones.

Especially since the start of the Industrial Revolution in the 19th century, we have become so dependent on technologies that we are scarcely aware of our dependencies … until something goes wrong—like, for example, with COVID-19. Then suddenly we become all too aware that globalization, which in the 1990s we were told was unstoppable, inevitable, and more or less wholly beneficial, has some serious downsides: Mass traveling spreads the virus, and supply chains are vulnerable, with a particularly negative effect on the poorest in society.

And, if we consider the Norwegian officials’  investigation, we may discover that the so-called safe vaccines have not really been tested sufficiently. As Carl Sagan said: “We live in a society exquisitely dependent on science and technology, in which hardly anyone knows anything about science and technology.” Unlike Hercules, we are all disempowered consumers who have to take what we are given.

Considering all this, plus the Hydras of nuclear power, biological experimentation (of which COVID itself may well be a consequence), pollution, and so on, we have to ask: What can be done about it? Does the myth give us a clue? The answer is yes; it does.

Tempering Science With the Divine

We have to set a hero (or heroine) up to fight against these Hydras. But the essence of the hero is that he is semi-divine. That is, solving human problems is at least half a spiritual matter, for that is what “divine” means. Science and technology on their own are not going to solve our problems; they cannot solve our problems!

As Robert Pirsig in his famous book “Zen and the Art of Motorcycle Maintenance” commented: “What’s wrong with technology is that it’s not connected in any real way with matters of the spirit and the heart. And so it does blind, ugly things quite by accident and gets hated for that.”

By its very nature, technology is spiritless. But Hercules is not; he is semi-divine and semi-human. And notice, too, that Hercules works with another human being, and they work as a team to overcome the Hydra.

In his fascinating book “Future Hype: The Myths of Technology Change,” Bob Seidensticker talks about “wicked problems,” and these are what I call the Hydra. “Wicked problems have complex cause-and-effect relationships, human interaction, and inherently incomplete information. They require compromises. … The difference between something that works in the lab, on paper, or in one’s head versus something that works in the real world and is practical to real people is a characteristic only of wicked problems.”

It is, therefore, the reintroduction of what is human and spiritual into combatting the problems of our time that is of the essence; only in this way can further Hydras be prevented.

But sadly, there is yet another Hydra to confront in the myth. Even for Hercules there was a Hydra that he did not foresee.

You will remember that Hercules lopped off the Hydra’s immortal head as well, and buried it. Before doing so, however, he took an ample supply of its poisoned venom with which to tip his arrows—making them fatal. The merest graze would kill any living being. He killed many enemies this way.

But finally, Hercules was caught by the technology himself. The poison was infused into a shirt that his wife inadvertently supplied him with, and he died in agony. Even the great Hercules could not escape the Hydra. Far better for him, perhaps, would have been to have buried the technology rather than to think he could actually use it for his own ends. It rather reminds one of “The Lord of the Rings” and the ring of power, which always betrayed those who sought to wield it (excepting its maker, the Dark Lord).

We need more heroes, human and divine, if we are to overcome the problems the world is currently facing.