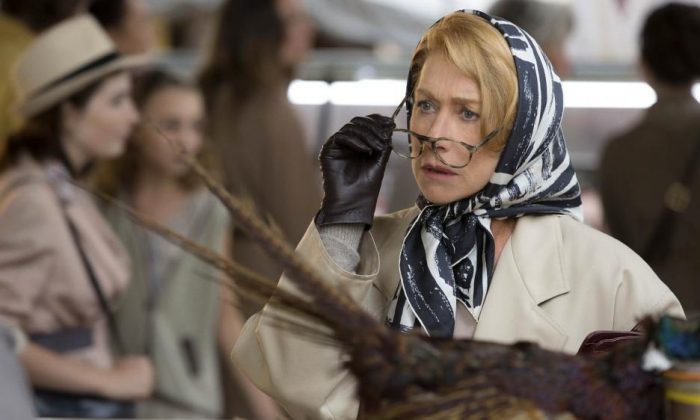 Helen Mirren is Madame Mallory, the proprietor of a French restaurant in “The Hundred-Foot Journey.” (Walt Disney Pictures)
Entertainment

World-class talent. What does it do? Sometimes it appears the owners of great talent can slow down time. It’s said that baseball great Ted Williams could see the individual stitches revolving on a blazing, 90-mph incoming fastball pitch.

“The Hundred-Foot Journey” kicks off with a shot of a young Indian boy tasting a black sea urchin. While his eyes don’t actually roll up in the back of his head, his expression lets us know that time has stopped for him, and his world-class senses are talking to ghosts.

“You cook to make ghosts,” his mother tells him. Nothing brings back memories and ghosts like food.

“Journey” is a delightful coming-of-age tale, and a romance. Two, actually. Three—if you consider the romance between food and taste buds, and the way great chefs are in love with food.

From Frying Pan to Fire

The Kadam family’s leaving Mumbai; it’s getting too hot over there politically. Off they go to Europe. England first, but they live under a howling Heathrow flight path.

After one too many shrieking jets, off they go again to France to start an Indian restaurant. Their son Hassan is that young ecstatic urchin-taster, all grown up and ready to be the family chef.

Despite some trouble at border (“Why are you leaving England?” “I found the vegetables had no soul.”), they find a quaint southern French village and decide to put down roots. And herbs and spices.

Immediately the competition revs up. Madame strolls over, ostensibly to say hello, takes a snooty look at their (in her opinion) loud, overspiced menu, and departs. How come when the Kadams head to market to stock up for their restaurant’s opening night, all their key ingredients are sold out?

Opening night threatens to be disastrous: “Papa, you can’t stand by the gate like in India, and drag people inside!”

Western suit failing to make the proper impression, Papa (the hilarious Om Puri) flees inside and returns wearing his turban and golden kameez. He tells his eldest son, “Smile, son! You have good teeth!”

They go fishing; he learns the five basic French sauces from a book she loans him. She thinks his skills are incroyable. But she puts brakes on the romance because, well, chefs have zero life, and two chefs would have less than zero life. Anyway, it’s apparent to the audience that in this case, two zeros would equal a cute couple.

Papa pays Madame back tit-for-tat when he hears that the premier is coming to town to eat his favorite dish—pigeons. Papa putts off to town to purchase pigeons. All the pigeons.

Soon, the food wars escalate to firebombs, a charred Indian restaurant, and Hassan’s burned hands. Seeing the hate-graffiti spray painted on the enemy’s stone wall, Madame is stricken with guilt and goes to personally scrub it off. The thawing begins.

What follows (for Hassan) is the classic Hero’s Journey of going away and coming back again, but to say anything more would spoil the soup.

It’s all completely predictable, but so’s “Winnie the Pooh.” It’s human nature to know the story and still want to hear it anyway. Granted, we no longer say, “Dad, read me the one about the wolf,” for the 400th time.

The youthful chef lovers are good-looking and act well. Indian veteran Om Puri is masterfully funny, and ever since Apu appeared on “The Simpsons,” the Indian accent has come to be highly appreciated by Western ears. Same goes for Scottish and Jamaican accents for Americans. We just like them.

We just like food too. And good storytelling. It’s the spice of life when storytellers as adept as Mirren and Puri tell the story.