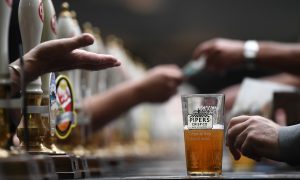 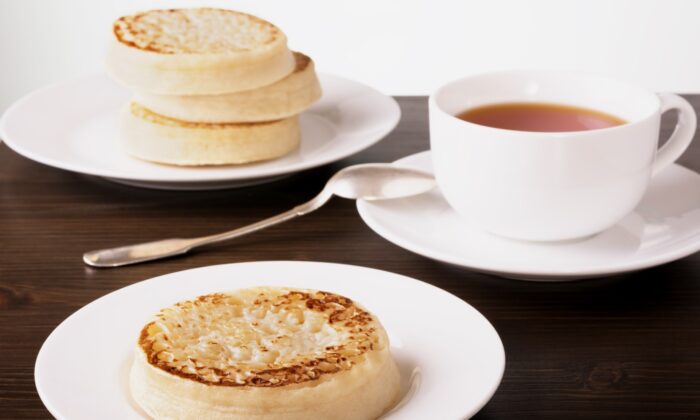 Crumpets, a staple in English kitchens, are riddled with little holes ideal for soaking up butter or marmalade. (Vetasster/Shutterstock)
Recipes

The Healing Power of Crumpets and Tea

A few years ago, my husband and I spent two weeks visiting family in England. We spent those early days of March blissfully free of the wind and snow that seems to linger at our Pennsylvania home, enjoying blooming daffodils in public gardens and alongside country roads. One day, the weather was warm enough to have ice cream near the sea, our backs against a stone wall, our faces turned up toward the sun to soak in its long-awaited warmth.

This wasn’t an ordinary trip to England. The previous fall, my grandad had passed away after a brief battle with cancer. His death was rare and beautiful in two ways. First, in that his life was so well and honestly lived that no one who knew him can talk about him with an ounce of bitterness, except at the bitterness of his passing. Second, that most of his family spent that last week of his life by his side, having cake and tea in the garden, playing music for him as he sat in the sun, tucked up with blankets and holding the hand of his wife of 57 years.

I wasn’t there, that last week of my grandad’s life. While my extended family grieved together and saw him through, I was back at home, unable, due to school and schedule, to be with the people I loved most.

Six months later, during a school break, I finally made it across the pond to my grandmother’s home. It still smelled like lavender but was absent of my grandad’s deep laugh and startling blue eyes. Their bungalow, lush with beautiful gardens and big windows, seemed hollow, like a thread of joy had been pulled from its foundation.

Our last night in England, we sat on the couch curled up in blankets, watching the second installment of the Hunger Games with my aunt and uncle. We’d been busy that day, walking the grounds of Blickling Hall, the home of Anne Boleyn, beheaded wife of Henry VIII. My auntie disappeared into the kitchen for a while, and the house filled with sounds of the kettle boiling and the plates being stacked.

She came back in with a pot of tea alongside a plate of toast and warm crumpets. As we slathered them with butter and marmalade and ate in the dim lamplight of the living room, our breakfast-for-dinner feast reminded me so much of my grandad that I half expected him to walk into the room to join us.

Crumpets are a small griddle cake, a staple in English kitchens. Made with water, flour, yeast, and baking powder, they are cooked only on one side and have a spongy texture, riddled with little holes ideal for soaking up butter or marmalade.

My grandad had been a breakfast enthusiast. Every night, he readied his breadmaker before going to bed. When the sun came back up in the morning, he enjoyed a true breakfast of champions: thick-cut toast, tea, muesli, and a banana.

I learned on that trip the way that food can be a balm for the grieving heart. Partaking in tea and crumpets—making much of a breakfast food, spreading it with my grandad’s beloved marmalade as we reminisced about the man who had influenced each of us dearly—restored a little of the joy missing in his wake. Eating amongst those who also loved and missed my grandad was a small drop in the well toward healing.

When we got home from that trip, I was delighted to find ready-made crumpets in the bread section of Trader Joe’s. They reminded me of that night in England, sharing good memories about my grandad. We began to have them on the weekends, always with a cup of tea, until the crumpet itself became for me a symbol of comfort.

Last year, when the world shut down and we all found ourselves at home, my craving for crumpets grew. I couldn’t make the long trip to Trader Joe’s for their pre-made crumpets, so I learned to make them at home, with my 4-year-old daughter. Crumpets are so easy to make, like yeasted pancakes, and my daughter loves standing beside the stove with me, watching the bubbles appear within the circular rings.

We had our crumpets and tea at the table in our pajamas, and I began to tell her stories. As we spread marmalade across the top so it seeped into the airy treat, I told her about my grandad’s breakfast table, about the fish pond outside their house, and the warm patch on the carpet made by the sun. I told her about the daffodils that bloom earlier than they do here, about eating ice cream by the sea.

I told her about how once, eating crumpets with a family member when I was sad made me feel happy again; about how food, sometimes, is a medicine, too.

These crumpets can be served immediately or toasted the next day. Spread them with butter and marmalade: The best part is that the toppings seep into all the little holes, or nooks and crannies, making it a delicious treat.

Mix together the flour and buttermilk. Combine the yeast and lukewarm water in a small bowl, and then pour into the batter. Cover with plastic wrap and set in a warm place for one hour.

Add salt and baking powder to the batter. Grease a skillet with butter and heat to medium-high. Grease 3-inch crumpet rings (you can also use circular metal cookie cutters) and place them on the skillet.

Spoon 1/4 cup of batter into each ring and cook for 6 to 8 minutes. Tiny holes should slowly start to appear all across the tops. When the top appears dry and stable, turn the crumpet over, along with the ring, and cook for 30 seconds.

Remove from the skillet and rings. Enjoy!