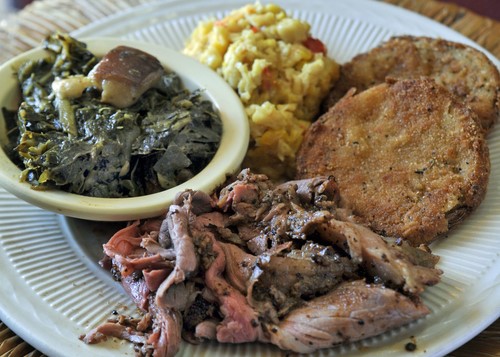 The Great Nashville Meat and 3

Nashville’s dining landscape is one of the most dynamic in the country. Nearly one new restaurant opens a week, according to culinary tour operator Karen-Lee Ryan, founder of Walk Eat Nashville.

Celebrity chefs Jonathan Waxman, Maneet Chauhan, Ford Fry, Richard Blais, and Sean Brock have all opened restaurants in the city, as have many new hotels, contributing to its moniker of “Nash Vegas.”

But there is one category of restaurants that has remained consistently timeless: the meat and three.

For the uninitiated, “meat and three” refers to a hearty meal consisting of a meat or other protein served with a choice of three vegetables. Usually served at lunch for under $12, it is the ultimate dining deal.

Many meat and threes are family-owned. One of the best known is Arnold’s Country Kitchen, established in 1982, which was named an “America’s Classic” by The James Beard Foundation in 2009.

Khalil Arnold, the affable son of founders Jack and Rose Arnold, explained that meat and threes originated as a way to feed farm laborers at a time when lunch was the main meal of the day.

Country music has also played a supporting role for meat and threes: many became canteens for musicians and songwriters. The walls of Arnold’s are lined with photos of appreciative country music performers, from newcomers to celebrities like Dolly Parton.

Puckett’s Grocery of Leiper’s Fork, meanwhile, started in 1953 as a general store with a small counter kitchen to serve local hunters, fishermen, and travelers visiting the Natchez Trace trail nearby, according to Claire Marshall Crowell, daughter of current owner Andy Marshall.

Swett’s, owned by the same African American family for more than 62 years, started as a tavern. When customers noticed the home-cooked meals Walter and Susie Swett fed their 10 children each night in the back corner table, they began asking for food with their drinks.

The food at these restaurants is true country cooking. Meat options are the likes of fried chicken, meatloaf, and slow-cooked ribs and brisket, while the sides may be cooked collard and turnip greens, stewed okra and tomatoes, squash casserole and starchy mashed potatoes, mac and cheese and candied yams.

While meat-and-three restaurants are found throughout other parts of the South, Nashville remains their epicenter. One reason is its location in middle Tennessee, which has long been a crossroads for truckers, traveling salesmen, and tourists.

However, while Nashville’s exploding hospitality industry is a boon to the city, it has also created challenges for mom-and-pop restaurants like the meat and threes, including a labor shortage of restaurant workers, escalating food costs, and local property taxes. How can restaurants whose business model is to serve affordable, fixed-price meals survive the increasing costs of doing business?

Nashville food writer Jennifer Justus bemoaned the closing of The Pie Wagon, a local meat-and-three institution since 1922, in her article “The Past, Present, and Future of the Nashville Meat-and-Three” (Nashville Scene) in May 2018. With so many new restaurant openings, she asks, “Are we even a meat-and-three town anymore?”

But meat and threes remain a source of Southern pride, and Nashville residents want to preserve their place in the city’s dining community.

Hospitality companies have stepped in to help. In 2017, Copper Kettle & Café was acquired and renovated by a Tennessee restaurant management company after its founder passed away. This year, Elliston Place Soda Shop, one of the city’s oldest restaurants with a meat-and-three menu, was sold to a local restaurant developer and closed for renovation.

In the end, Justus surmises, “Maybe meat-and-threes are like good country records—we sometimes worry about them going away, even as good ones come along or persist.”

Customers won’t notice any concerns during a lunch visit, when the lines still start forming just before 11 a.m. On average, places like Arnold’s Country Kitchen and Puckett’s can serve upwards of 500 customers a day.

A New York City restaurateur who joined me for lunch at Puckett’s almost fell off her chair with surprise upon hearing those numbers, and seeing the $10.99 meat-and-three options. That price is less than the cost of a single cocktail in New York.

As long as there are hungry customers seeking authentic Southern hospitality and rib-sticking country cooking, the meat and three will continue to flourish, the epitome of Nashville’s warm culinary welcome.

Here are a few examples of Nashville’s meat and threes to visit. Days and hours of operation vary.

Lines form at 10:30 a.m. for lunch at this red concrete building emblazoned with the name “Arnold’s.” Jack and Rose Arnold opened the restaurant in 1982 and now manage it with their three sons—Khalil, Mon, and Franz—and daughter, Rose Emily. The siblings can usually be found working behind the cafeteria-style serving line as customers push their trays along, while matriarch Rose is out and about greeting customers, many of them longtime regulars.

In addition to the original Leiper’s Fork location, Puckett’s has outposts in downtown Nashville, Franklin, Murfreesboro, Pigeon Forge, Columbia, and Chattanooga. Puckett’s menu cover depicts a painting of group of friends who still gather regularly for lunch and conversation, whom the owners affectionately refer to as the “Table of Wisdom.”

Called “a pillar of the local African American community” by Southern food writer and documentarian John T. Edge, Swett’s opened in 1954 and is still operated by the Swett family. The restaurant is located in an unassuming brick building, but the food inside is anything but basic: simmered pork chops, fried chicken, stewed okra, and a smokehouse offering of tender ribs, brisket, pulled pork, and chicken wings.

Owned by a restaurant management company since 2017, this cafeteria-style restaurant still draws crowds for its coconut chicken, meat loaf, green bean casserole, and sweet potato casserole. Sedrick Turner, a company officer, shared that the new owners had to make changes that loyal customers initially resisted, such as swapping canned vegetables for fresh, to “keep up with the changing times.”