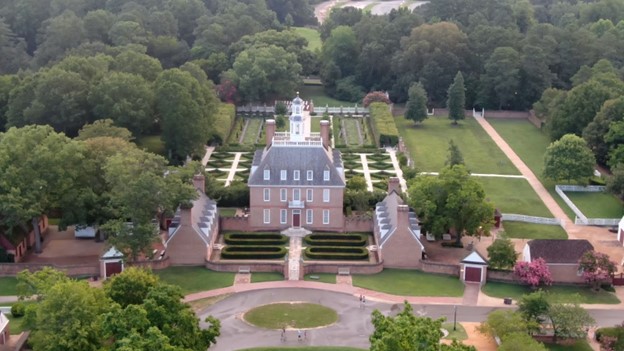 This aerial view of the Governor's Palace reveals the front court, side yards, and formal garden at the rear, and is surrounded by groomed lawns and trees. The Palace was designed in a renaissance style that was popular in England and the Virginia Colony. The symmetrical composition is displayed by the ordered and proportioned placement of windows, doors, and central tower. The restrained use of ornament and rubbed red brick give the appearance of a strong masculine building. (J.H. Smith/Cartio)
Arts & Tradition

The Governor’s Palace at Colonial Williamsburg: Witness to the Birth of America

Larger than life: Art that inspires us through the ages
BY James H Smith TIMEJuly 31, 2022 PRINT

In the 18th century, the Governor’s Palace was considered the most significant building in Williamsburg, the then-capital of Virginia. It was considered by many to be the capital of all the American colonies. Construction on the building began in 1706.

The building had many roles. It was the official residence of the governor in a manner fitting his position as representative of the English crown. It served as the designation for formal receptions, where colonists could develop a relationship with the colonial administration. It also served as a model for other important structures in the colonies, such as the large plantation houses in Virginia and Silliman College at Yale University in the Colony of Connecticut.

The Governor’s Palace was home to seven royal governors and two post-colonial elected governors: Patrick Henry and Thomas Jefferson. In 1780,  Jefferson, the last governor to reside in Williamsburg, moved the capital to Richmond, where he planned a capitol building underpinned by neoclassical ideals.

The original Governor’s Palace burned in late 1781; it had been used as a hospital for wounded American soldiers after the Battle of Yorktown.

In the early 20th century, 150 years later, the family of John D. Rockefeller Jr. led an effort to recreate all of Colonial Williamsburg on its original site, to share insight about America’s origins. In this setting, the Governor’s Palace was rebuilt, based on archaeological and historical evidence and references. It was completed in 1930 and opened as a living museum, part of what Williamsburg has become today: the largest outdoor museum in the world and a real living town showcasing the various trades, arts, crafts, and traditions of freedom and democracy of Colonial Williamsburg and early America.