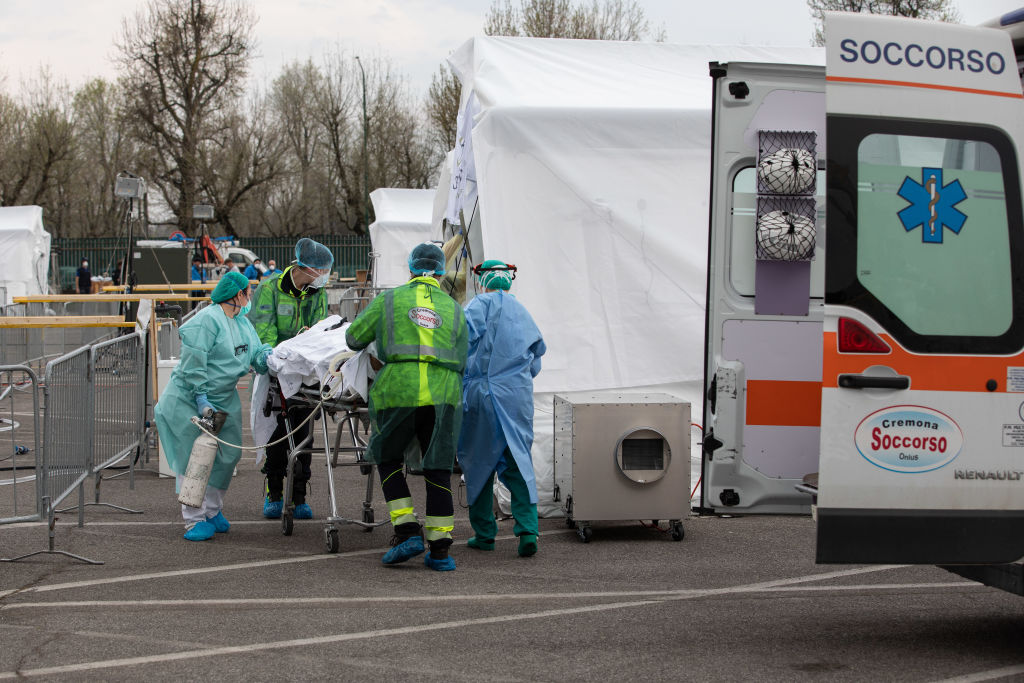 A patient is treated by a doctor at a Samaritan's Purse Emergency Field Hospital on March 20, 2020, in Cremona, near Milan, Italy. Thanks to a 68-bed respiratory unit, 32 members of Samaritan's Purse disaster response team will provide medical care during the CCP virus pandemic. (Emanuele Cremaschi/Getty Images)
Family & Education

The Good, the Bad, and the Ugly: Character and the CCP Virus

It’s hard-wired into our blood and bone, as it is in all species. “Flight or fight” are not just empty words. When danger confronts us, “flight or fight” kicks in, rousing our adrenaline, snapping dulled senses into overdrive, and reviving instincts as old as mankind itself.

In some people and places, fear about the CCP (Chinese Communist Party) virus, commonly known as novel coronavirus, has revealed the ugly side of this instinct.

[Editor’s note: The Epoch Times refers to the novel coronavirus, which causes the disease COVID-19, as the CCP virus because the Chinese Communist Party’s coverup and mismanagement allowed the virus to spread throughout China and create a global pandemic.]

In the early days of the outbreak, many dashed to the grocery stores, stripping the shelves of canned goods, hand sanitizers, face masks, and of all things, toilet paper, buying far more than normal, terrified they might face a long siege barricaded in their own homes. Sometimes shouting matches and scuffles broke out as customers fought over these items. Here in Front Royal, Virginia, I heard an older woman tell her companion with disbelief in her voice that she had just witnessed two men at Martin’s, our local grocery store, yelling at each other in an argument over a pound of hamburger.

When Vermont’s Middlebury College closed its campus and sent students home on account of the CCP virus, ugly jumped in the saddle and grabbed the reins. Rowdy drunken young people rioted and vandalized the campus and at least one shop in town before departing. And the point? Who knows? Maybe ugly doesn’t always need a point.

Like certain staples, gun sales have shot up—pardon the pun—the last three weeks. In his online article “Gun and ammo sales spike in US on coronavirus worries,” Stephen Gandel reports that many gun stores are seeing record sales of ammunition and guns to people worried about protecting themselves if society collapses and martial law is declared. Like the run on the grocery stores, these sales were driven by fear and rumor.

Next up for consideration are the bad, all those Americans—politicians, some in the media, those who live by that adage “Never let a good crisis go to waste”—who for various reasons have helped create and drive this nation-wide panic. Some of them are simply ignorant, some enjoy the spotlight, and some, the worst of the lot, hope this crisis will damage the presidency of Donald Trump. These are the same aberrant human beings who for three years have wished for a recession in hopes of damaging the president.

Never mind that the CCP virus is throwing millions out of work, never mind that Americans are dying: it’s all about getting rid of Trump.

Some private citizens also join the band of the bad. They ignore the basic precautionary measures recommended by health professionals—frequently washing their hands, avoiding crowds, coughing into the sleeve. A few young people, clearly minus a good number of brain cells, have created a “coronavirus challenge” in which they take selfies while licking airplane toilet seats. These pictures and the “challenge” are disgusting, but if I may offer a suggestion: Why toilet seats? Why not ratchet up the challenge, go to your local grocery store, and lick the handles of shopping carts?

Now, let’s turn to the good.

Self-preservation may be instinctual, but many people, perhaps most people, offer help and rescue when others are in trouble. Gestures big and small, sometimes just a word spoken in kindness, reveals this part of our nature, a light shining within us.

Here are a few instances of goodness in this time of pandemic.

Yesterday the coffee shop I frequently visit—thank heavens it’s still open—was largely deserted. I asked the young barista behind the bar how she was holding up. “Oh, I’m just trying to stay calm,” she said.

After a morning of reading online of the hysteria brought on by coronavirus, I wanted to stick out my hand and thank the kid for her normality, but then we’d both just have to wash up again. Instead, I smiled at her, said “I like your attitude,” and took my Peruvian coffee to a table in the next room.

In Clintonville, Ohio, the Columbus Dispatch reports that Taran Tien, age 9, and his sister Calliope, age 6, put on their best clothes, took up their cellos, and headed to the porch of a neighbor, Helena Schlam, age 78. Under self-quarantine at the insistence of her children, Schlam was delighted by the Tiens’ impromptu concert.

Another recent example of good: a common enemy can make enemies friends. Around the country, we are seeing for the first time in years a spirit of bipartisanship among our political leaders. Michael Goodwin of the New York Post writes that President Trump and New York governor Andrew Cuomo, until recently bitter partisan foes, are forming a partnership to battle the coronavirus, with each man praising the efforts of the other. “We’re not Democrats, we’re not Republicans, we’re Americans,” Cuomo remarked.

When’s the last time we heard anyone say that?

If we remain alert to those around us, our friends and family members, and the people we pass on the street or see in the grocery store, I suspect we’ll find plenty of examples of good deeds and kind words in these uncertain times.

We may also find some people looking for a deeper meaning in life, a connection to some power beyond them. For a while after 9/11, our churches filled with people seeking solace and answers to large questions: Why are we here? Does the universe have a purpose? Do we have a purpose? Coronavirus may steer some of us in search of a higher power.

Faith may even inspire some to push past the instinct for self-preservation and give of themselves, and sometimes lay down their lives, for others.

In “How Early Christians Saved Lives and Spread the Gospel During Roman Plagues,” Tyler O’Neil takes a thoughtful look at the Christian versus the pagan response to plagues in ancient Rome. The pagans, including the famous physician Galen, ran for the hills; the Christians stayed and tended to the sick, sometimes dying themselves but also saving many lives. Bishop Dionysius of Alexandria described the bravery of these Christians, writing, “Many, in nursing and curing others, transferred their death to themselves and died in their stead …(a death) that seems in every way the equal to martyrdom.”

Such sacrificial efforts remain signs of our humanity. In this same article, O’Neil tells readers of Samaritan’s Purse, a Christian charity that just airlifted a field hospital, 20 tons of medical supplies, and 32 medical personnel to virus-stricken Italy. Franklin Graham, the president of Samaritan’s Purse, stated that “We’re going to Italy to provide life-saving care to people who are suffering. There is a lot of fear and panic around the country, but we trust that God is in control.”

In the dark days of the American Revolution, Thomas Paine wrote, “These are the times that try men’s souls….” The battle against the CCP virus is trying our souls, allowing us to evaluate who and what we are both as a nation and as individuals. Will we turn one against the other? Will we attack opponents rather than fighting together against this invisible foe? Or will we follow the path of honor and virtue by helping the sick and those in need of reassurance and love?

Let’s stand on the side of the good.