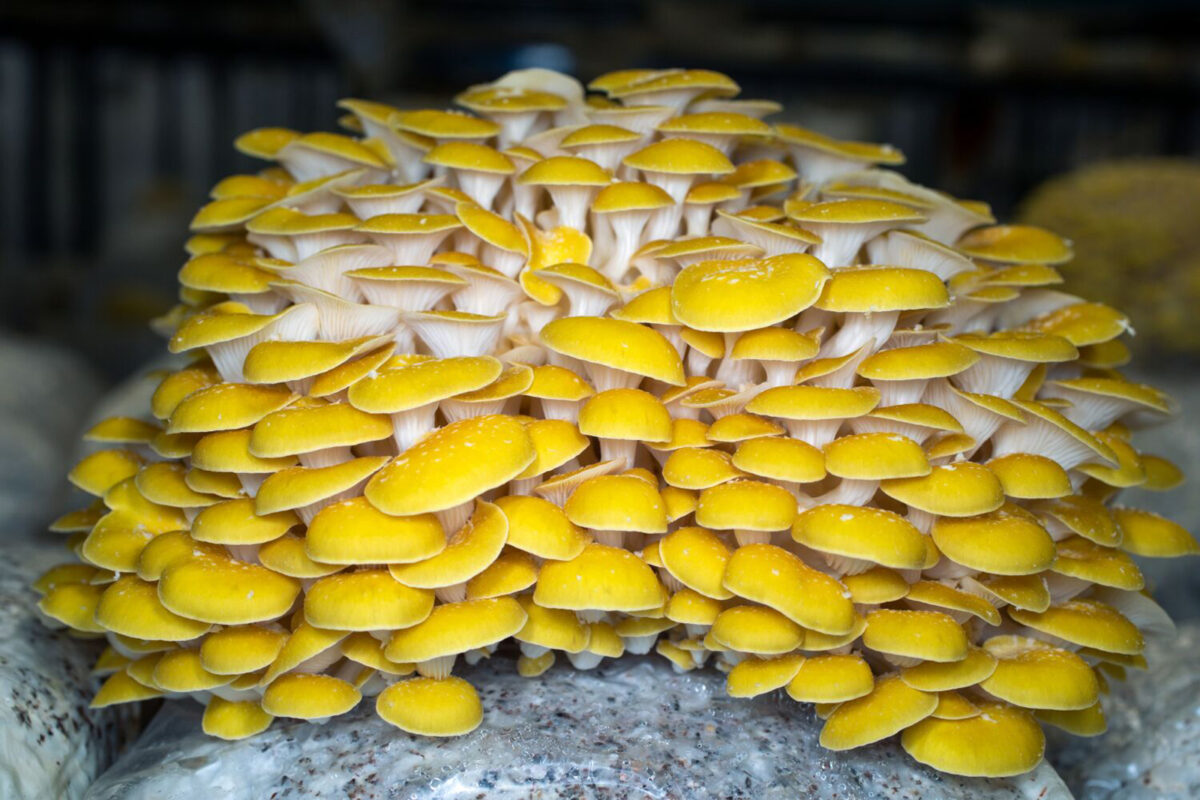 Yellow oyster is one several varieties grown at Smallhold Mushrooms. The company is an urban mushroom farm in a warehouse in Vernon. They grow several different varieties and sell at markets across L.A. Photographed on Thursday, Oct. 27, 2022, in Vernon, California. (Myung J. Chun/Los Angeles Times/TNS)
Food

LOS ANGELES–A mushroom revolution is taking place on the grocery store shelves of Southern California: In the produce sections of markets across Los Angeles, Agaricus bisporus, commonly known as the white button mushroom, is giving way to other dazzling fungi species such as blue oyster, lion’s mane, maitake, and royal trumpet.

Many of them likely are cultivated in a sprawling warehouse in the middle of Vernon—an industrial city just south of downtown L.A.— the location of an urban mushroom farm that New York-based company Smallhold opened five months ago.

In a 34,000-square-foot building, on the same street as a producer of ready-mix concrete and a Dr Pepper distributor, Smallhold grows mushrooms of fantastical display and scale—several thousand pounds of mushrooms a week, or tens of thousands of pounds in the near future, if all goes as planned.

“We have the capacity to harvest more than 20,000 pounds a week,” said co-founder and CEO Andrew Carter. “Our goal is to feed 2 million people in the U.S. with mushrooms by the end of 2022. We’re very much on track.”

Few other categories of produce have captured consumers’ collective imagination like mushrooms. Not a vegetable, mushrooms (like plants and animals) belong to their own biological kingdom: fungus. In recent years, a fascination with all things fungi has paralleled food and health trends: eating less meat, foraging, and a growing interest in food as medicine (including the clinical use of psilocybin, which naturally occurs in a different category of ‘shrooms—the psychedelic ones).

So it isn’t surprising that mushroom sales in general have boomed. After the initial shock of the pandemic in early 2020, weekly U.S. mushroom sales consistently rose more than 20% year-over-year between April and July (matched only by oranges and limes in the produce section), according to research firm IRI. That same year the global market hit $54 billion, and it’s expected to reach $86 billion by 2026.

“There’s a lot more room for people to incorporate mushrooms into their lives,” Carter said. “We just keep going for it.”

What started as Carter’s experiment growing trumpet mushrooms in a basement in 2015 has become a company of 115 employees in three states, selling mushrooms to more than 500 stores across the country and an expanding roster of chefs and restaurants.

Carter, previously a grower and consultant for greenhouse operations, launched Smallhold with co-founder Adam DeMartino in 2017 in Brooklyn, eventually moving into a facility near the Navy Yard, which is a tenth the size of the Los Angeles farm. Toward the end of 2020, the company opened another facility in Buda, Texas, outside of Austin. The L.A. mushroom farm is its biggest and most advanced yet, Carter said.

“We’re trying to bring fresh, local, certified organic mushrooms throughout the country, which seems like a simple task, but it means you have to grow in these regions,” he said. “That becomes very complicated.

“Oyster mushrooms, lion’s mane, maitake, shiitake — all of these don’t ship that well. So growing them closer to the consumer, it’s better for the consumer,” Carter said. “The technology we use and methods we use are significantly lower in carbon footprint than any other mushroom farm, and our water print is negligible. You couldn’t really find much food that uses less water than Smallhold.”

“Beep, beep, beep, beep.” It’s the sound of a near-perfect environment for a mushroom. More precisely, it’s the noise that the automated, motion-sensing roll-up doors of insulated growing chambers make as they open and close. Digital screens outside of the 24 chambers—each chamber the size of a small studio apartment—indicate the interior temperature, carbon dioxide level, and humidity, what the staff at Smallhold call climate recipes.

Inside one of the chambers, wall-to-wall shelving holds blue oyster mushrooms (Pleurotus ostreatus). Some are just starting to bear fruiting bodies, or sporing bodies. The fruiting body is the mushroom, and it develops from mycelium—a fungus’ network of filaments—as part of its reproductive process.

Mycelium absorbs and breaks down surrounding organic matter; in this case, it’s blocks of substrate (rather than decaying logs on the forest floor). The substrate is made with byproducts from the timber industry—mixed with grain or other nutrients—and inoculated with the mycelium.

(After the mushrooms are harvested, the substrate is given away to be reused by customers, who can grow their own mushrooms with it; composted; or studied as part of a mycoremediation project to rehabilitate contaminated land.)

“The fruiting process is really dependent on the environment, and the environment is quite complex,” Carter said. To dial in the climate recipe for each type of mushroom, Smallhold developed a patented technology for capturing hundreds of thousands of data points daily.

“The climates are based on the different regions that they’re from. You can imagine a misty forest floor in spring to grow an oyster mushroom.

“But those evolve quite a bit over the years because we’re collecting so much data and we know how to grow these in a more optimum way.”

The data is closely monitored by a team of engineers at Smallhold’s New York headquarters. As soon as the Los Angeles team arrives each morning at the Vernon location, engineers are ready to make any adjustments. “It also takes hands, eyes — we have a lot of people,” said Jesse Goldman, general manager of Smallhold in Southern California. “We’re in constant contact with them to show them what’s happening in here and to make sure we’re growing everything we need to.

“There are no days off at the farm. There’s always someone here working, always more work to be done. Mushrooms don’t stop for us.”

He pointed to a cluster of dozens of blue oysters, a tower of overlapping mushrooms stretching upward from their substrate.

“Here’s some beautiful color here. These are really blue, really blue,” Goldman said. “That’s all light effect. This is the early fruiting body color, and as they mature, they get a little more gray.

“It’s all about the cap and gills on the side. The caps start to fold up and gills start to show themselves. We look for a more even cap, slightly turned, with gills staying nice and lined up and straight. This one is prime.”

A few chambers over, young lion’s mane (Hericium erinaceus)—pink and brainlike in its early sporing stage—filled the room. Within a week they will become fluffy white, with an internal structure like cauliflower and creamy white gills, called teeth, that cascade down in a shaggy pompom.

“It’s my favorite mushroom,” Goldman said. “I like to make lion’s mane steaks and a pulled-pork variation.”

Until recently, the button mushroom was practically synonymous with “mushrooms” in grocery stores. With its perfectly domed cap and short, sturdy stem, it was first cultivated on a heap of horse manure in France in the 1700s. In 1920s Pennsylvania, a farmer (who also was a mycologist) noticed white mushrooms among the typically brown ones of mature A. bisporus and began harvesting the creamy-colored version, which took off in popularity. But white button, brown cremini, and giant portobellos are all the same variety. And historically, they have represented 90 percent of the mushroom market, much of which is still grown in Pennsylvania.

But the cultivation of specialty mushrooms—any not belonging to the genus Agaricus—has boomed since shiitakes first hit U.S. supermarkets in the 1980s. By 2019, more than 300 small-scale mushroom farms across the country were growing and harvesting at least 20 pounds of mushrooms a week, according to the Cornell College of Agriculture and Life Sciences. Shiitake (Lentinula edodes) and oyster (Pleurotus ostreatus) are the most common specialty mushrooms; they’re the second- and third-most-produced mushrooms in the U.S.

“You can now find such great mushrooms at your market,” said author and photographer Andrea Gentl at a recent discussion for her new cookbook, “Cooking With Mushrooms: A Fungi Lover’s Guide to the World’s Most Versatile, Flavorful, Health-Boosting Ingredients,” a sold-out event organized by book store Now Serving at Botanica Restaurant. “The point of this book was really about the cultivated mushroom boom and how now they’re more accessible to everyone.”

“I used to think of mushrooms as something on pizza,” said April Valencia of Masa Memory, one of the moderators for the discussion. Gentl’s book includes recipes for king trumpet schnitzel, shiitake kofta, pots de crème with porcini and chocolate, and mushroom-rose-rye granola with powdered maitake, cordyceps, and reishi.

“We really want to bring interesting varieties to the grocery store,” Carter said. Smallhold grows about 14 varieties, focusing on six “hero mushrooms”—blue and yellow oyster, lion’s mane, maitake, shiitake, and royal trumpet. Goldman said there are plans to grow turkey tail, named for its fanlike shape and variegated brown color, as well as reishi and seasonal varieties such as black pearl.

“We’re a big group of people here obsessed with mushrooms,” Carter said. “The more mushroom people you talk to, you realize once you get into it, it takes over your brain.”