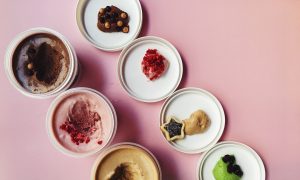 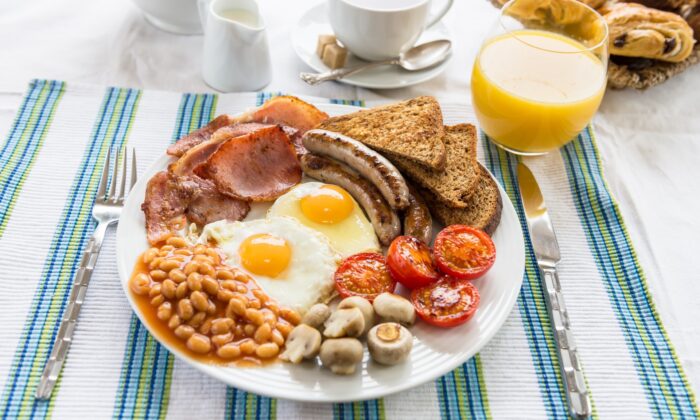 Though the components vary—and are often hotly debated—the English breakfast is considered one of the UK's greatest culinary traditions. (Anna Mente/shutterstock)
Food & Dining

The Full English: In Praise of the UK’s Most Beloved Breakfast

Once the epitome of conspicuous consumption—a way for the landed gentry to flaunt their wealth—the English breakfast remains at the top of the foodie hit list for visitors to the UK. Indeed, leaving without having at least one full English is tantamount to heresy—certainly on par with swerving grits in the Southern United States, or tacos in Mexico.

The full English, sometimes colloquially called a fry-up, runs the gamut between a greasy but gratifying plate of eggs, bacon, sausages, baked beans, fried bread, tomatoes, and mushrooms, to the gourmet equivalent. While the ingredients largely remain the same, how they’re used, and especially their provenance, dictates at which end of the scale your meal will sit.

“It’s all about finding great ingredients and treating them with respect,” Michelin-starred chef Tom Kerridge said. “Done properly, the full English breakfast is one of the best dishes in the world.”

Guise Bule, founder and chairman of the English Breakfast Society and author of “The English Breakfast Handbook,” agrees. An impassioned authority on the subject, he started the society because he wanted to celebrate what he considers to be the world’s most famous breakfast.

“It’s one of the UK’s greatest culinary traditions, and I was dismayed by how our whole relationship with the fry-up had changed over the centuries,” Bule said. “It had once been a gastronomic feast, a bounteous buffet enjoyed by the gentry who spent hours gorging on the best fare from their land, but is now too often treated as a fat-fueled, greasy cure for a hangover. I think that is doing it a massive disservice.”

In the 13th century, Bule writes in his book, the dishes that made up the first meal of the day gave the gentry an opportunity to show off their wealth through the abundance and quality of the ingredients. Among the Anglo-Saxon specialties that would have been served were bone marrow, pork crackling, eels, pork pies, and all the seasonal fruits and vegetables the cooks could harvest from the estate’s gardens and orchards.

Six centuries later, during the reign of Queen Victoria (1837–1901), free education and the Industrial Revolution brought increased prosperity. The emergent middle class wanted their own slice of gentrification, and found it at the table, trading up from cold meats and cheese for breakfast to eggs, fish, and bacon.

“The Industrial Revolution enabled social mobility, so aspiration was high,” Bule said. “People wanted to emulate the gentry as much as possible, and adopted the cooked breakfasts eaten by the wealthier classes: They considered it the most civilized way to start their day. By the time World War I broke out in 1914, the traditional breakfast as we would recognize it today had become an indispensable aspect of all hotel and bed and breakfast menus, and one of the bedrocks of the UK’s culinary history.”

And so it has remained, bouncing back after both world wars and the rationing they necessitated, and even holding its own in the face of health warnings linking bacon with cancer, and saturated fats with heart disease. In fact, sales of sausages and bacon in the year ending in April 2020 were up 6.6 percent and 3.4 percent respectively from the previous year, according to analysis from IRI, while data released by analyst Kantar showed that the number of cooked breakfasts served in UK households soared from 11 million to 20 million in the four weeks ending April 19, 2020.

So what is a traditional full English breakfast?

“The core essentials are bacon, eggs, sausage, black pudding [a type of sausage made by mixing pig’s blood with oatmeal and pork fat], baked beans, grilled tomato, and fried bread,” Bule said. “Many people add mushrooms and bubble and squeak,” which is made with leftover vegetables and mashed potato, “and I know there is now a leaning towards including hash browns, but that, for me, is a transgression too far.”

Bule, like Kerridge, recommends using really good quality ingredients, particularly where the meat is concerned. “Buy the best back bacon and sausages you can afford—where a full English is concerned, quality must always trump quantity,” he wrote.

“Here in the UK, many of our sausages are regional specialties. The Cumberland sausage, for example, has even been awarded Protected Geographical Indication, in recognition of its unique geographical heritage and history—so provenance really matters. And I am similarly particular about the bacon I use.”

For aficionados like Kerridge and Bule, the English breakfast still retains the indulgence and decadence of its earliest predecessors. Creating the perfect breakfast is a labor of love and an exercise in dedication. Both the cooking and the consumption should be savored.

This recipe, courtesy of the EBS, has stuck to the cultural norm: back bacon, pork sausage, black pudding, beans, eggs, fried tomatoes, and mushrooms.

First, griddle your bacon. Cut notches in the fat so it doesn’t curl up when it cooks, and turn it until it cooks evenly on both sides.

Next, fry your bread. Fried bread is one of the English breakfast’s least healthy ingredients—because it’s so greasy—but it’s delicious with a fried egg on top. Fry two slices and put them on a plate to stay warm near the grill. You can go for fancy seed-studded bread if you prefer, but an ordinary white loaf is fine, too. Purists like to fry in lard or bacon fat, but you can use butter or vegetable oil.

Now fry your tomatoes and mushrooms. They only need to be lightly fried before being put on the hot plate with your fried bread to await breakfast assembly.

Fry your sausages and black pudding. Make sure they are cooked inside and out.

While the meat is cooking, toast another two slices of bread and heat your baked beans. They need only two minutes in a microwave or on the stove.

Assemble all your cooked ingredients on a large plate. Fry your eggs, ensuring you keep the yolks runny, and add to your plate. Serve immediately, with lots of fresh tea and coffee, a glass of fresh orange juice, and some water.

Added extras can include butter and preserves for the toast, tomato and brown sauce, and salt and pepper.