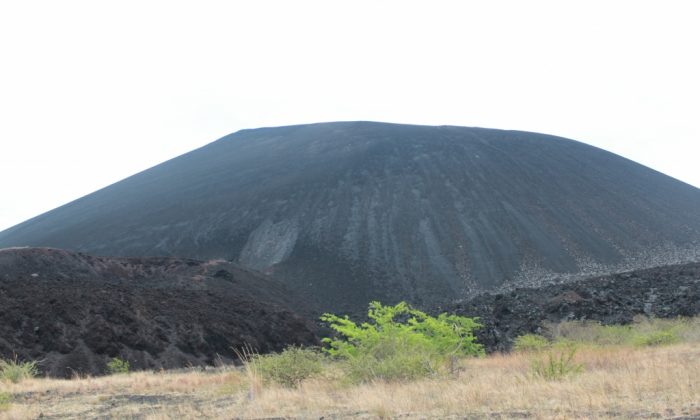 The Day I Boarded Down an Active Volcano

As I looked over the edge of the steep, dark volcano-side, I thought to myself: “Puh-leeze, what’s with all the whining and crying? This is going to be AWESOME! It was not until I was 20 meters down the slope, racing 45 km/h on a little piece of wood that I realized, this was probably not so well-considered after all.

Let’s take it from the beginning..

Marching to the Volcano Top

It was yet another sizzling hot day in León, Nicaragua (40°C) when we hiked to the summit of Cerro Negro. This volcano is the youngest in all of Central America at only 163 years old. With a height of 728 meters, it took us 45 minutes to climb it with a few breaks included.

You Cannot Fall Off. No Worry, Miss.

When we finally got to the drop zone, our guide instructed us to put a foot down to go slower and to lean back if we wanted to speed up. And falling off? Hah, not a chance! (Or so he claimed).

Before take off, we were given some fancy overalls, goggles and gloves to protect the clothes and skin. The fact that one of our suits missed a zip and both goggles were broken, seemed like a minor issue at the time.

So I sat on my board, grabbed the rope in front, and off I went! Building speed rather quickly, I was soon blindsided by dust and sharp rocks, and all I could feel was the panic rapidly building up inside me. The board was hard to control and the faster I went, the more volcanic gravel was kicked into my face.

My cocky arrogance had fled the scene. Heart pounded so loud that I couldn’t hear my own thoughts, and finally I did the only rational thing possible: leaned way back to gain balance and slow down. But oh, what a bad idea! Not only was it the other way around, but it resulted in the board going sideways on me. Two feet down, both elbows deep in the (burning hot) gravel and a serious squealing moment later, I fell off and finally got the unstable board to stop. Without crying.

With Dust in Unspeakable Places!

Safely back at the base and without any battle wounds to show, I realized that I had dust and pebbles über alles! In my mouth, ears, nose, socks and in places I won’t even begin to mention here.

As I rinsed my mouth of the last bad tasting gravel, I found volcanic ash and small stones in my bra. Yes, it was gross, but also kinda awesome. I mean, volcanic ash in your bra – how often do you get to try that?!

We bought the volcano boarding trip through the hostel Posada Fuente Castallia, but if I could do it all over again, I’d go with BigFoot. They arrange the tour for a larger group and it seemed like much more fun – plus it’s cheaper.