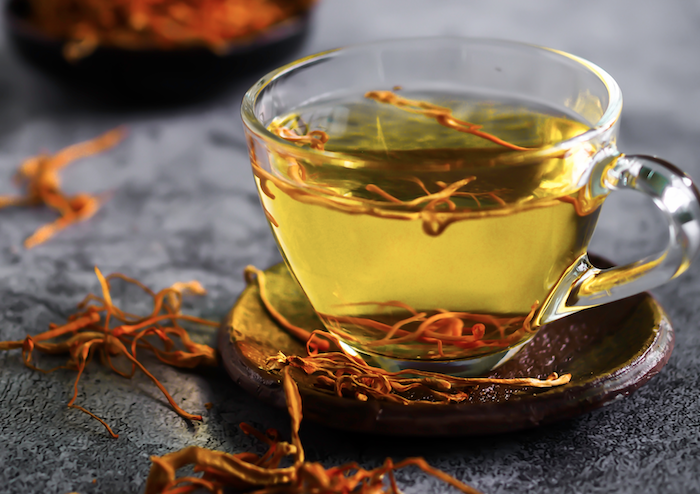 The Controversial Tea That Trumps Coffee

A tiny fungus could give you the energy you need—without the comedown
BY Derek Henry TIMEFebruary 16, 2019 PRINT

Coffee has become a morning ritual for approximately 80 percent of people in North America. There is virtually no other food or beverage that continues to sustain such popularity. Without their morning java, many people struggle to get their brain and body going for the day.

However, like any drug (caffeine is psychoactive), coffee has its drawbacks. Most people try to ignore these due to their blind love for this invigorating beverage. Some of these drawbacks include:

Ironically, coffee doesn’t add energy to the body like most people think it does. It actually burns up your energy reserves at a faster pace, which means you get a short term boost for long-term jitters and fatigue, which is usually combatted by drinking more coffee or looking for other energy enhancers. To understand the adrenal impact of coffee, consider the following analogy by Stephen Cherniske, author of “Caffeine Blues”:

“Imagine you lived in a country that was always under threat of attack. No matter where you went, there was a perpetual state of alert. Not only that, but your defenses were constantly being depleted and weakened. Does that sound stressful? Caffeine produces the same effect on your body, like fighting a war on multiple fronts at the same time.”

Cherniske calls this state of constant physiological alert “caffeinism,” which is characterized by fatigue, anxiety, mood swings, sleep disturbance, irritability, and depression. Of course, as long as you keep taking the drug or upping the dosage, the true effects aren’t felt until a serious health issue crops up. And rarely does that issue seem connected to the common habits which cultivate the issue, like coffee.

Fortunately, there are ways to enhance your energy each day, without any of the drawbacks of coffee or any other caffeinated beverage. Although there are a few suitable substitutes, one of the most recently revered teas for energy and stamina, is one created from cordyceps.

Get Functional With Fungus

Cordyceps is a fungus that has been used in traditional Chinese medicine for centuries. The focus is now on two of the 400 species: Cordyceps sinensis and Cordyceps militaris. The former is a genus of parasitic fungi that grows on the larvae of insects, and the latter is from the fruiting bodies of medicinal mushrooms. Regardless of which one you choose, they both have been adorned with health qualities that make them well worth considering. Some of the noted capabilities cordyceps are said to possess include the following:

One of the biggest controversies around cordyceps comes from long distance female runners from China who smashed records in the 1993 Olympics in the 1500 m, 3000 m events by a full two seconds, and 10,000 m event by 42 seconds. Their coach attributed their success to a diet that included cordyceps, suggesting that it improved exercise capacity in these Olympic athletes through its antioxidant effects. This certainly raised the ire of other athletes and doping officials, who couldn’t fathom that cordyceps alone could have been largely responsible for their remarkable results.

Cordyceps will not impart the same flavor as coffee. This fungus has a fairly neutral flavor which means it can be easily made into a delicious beverage. If you like a latte, add some coconut milk and coconut oil to the tea and blend gently to add a frothy and creamy texture. If you like a little sweetener, coconut sugar will do perfectly. Regardless of how you make it, it helps provide the same desired benefits of coffee—energy and brain stimulation—without the side effects.

That alone makes it worth looking further into.

Derek Henry is a holistic health coach. This article was originally published on HealingtheBody.ca

Derek Henry
Follow
Derek A. Henry, Founder of Healing the Body and the THRIVE Academy, used nutrition, supplementation, and a holistic lifestyle to naturally unravel 13 chronic disease conditions that conventional or alternative medical professionals couldn't help him resolve. As a result of this one-in-a-million health transformation and the knowledge acquired in the process, he is now happier and healthier than he has ever been and now educates, coaches, and inspires thousands of others to transform their health through a natural and holistic approach. To date, he has helped his THRIVE Academy participants heal over 20 different chronic disease conditions, primarily related to digestive and autoimmune concerns.
SHARE
Friends Read FreeCopyFacebookTweet
You May Also Like