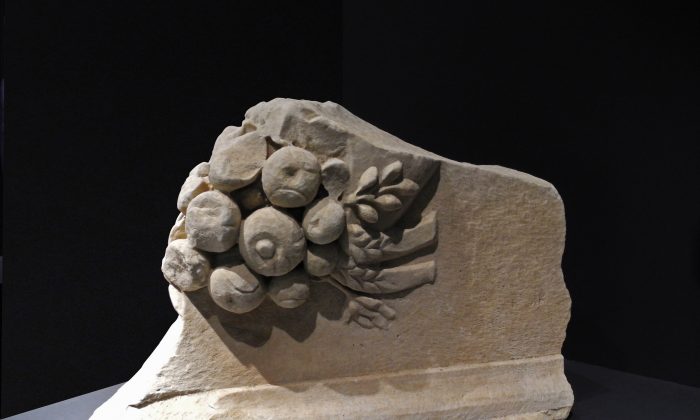 Part of a railing in the Colosseum. The Romans considered the cornucopia to be a symbol of fertility, wealth, and fortune. In the amphitheatre, it acquired a further meaning: victory. (Courtesy of Canadian War Museum)
Arts & Culture

The Colosseum: Death and Glory in Ancient Rome

“Gladiators and the Colosseum – Death and Glory” is the big summer exhibition at the Canadian War Museum. The exhibition is, as its posters and signage promise, full of death and glory. Contradictions abound.

The exhibition is arranged in a sequence of four rooms, each replete with a wealth of historical narrative accompanied by the display of artifacts from another time.

In the first room, titled “A Day at the Colosseum,” we learn it was customary for the Colosseum’s workers to sit down to a pre-game feast with the gladiators scheduled to fight that day. We learn that those who set up the schedule of the day’s games were called “editors,” and that “gladiatorial combats” have their origin as “funeral rites.”

In 264 BCE, for example, three pairs of prisoners fought in a cattle market to mark the death of someone important. No reason for this “ritual” is given, nor is its meaning discerned for those who watched the fights.

The usual program for a day at the Colosseum began with a parade of all who would be part of the day’s events. There must have been a cast of hundreds, if not thousands. First, spectators saw hunters killing wild animals in the arena. This was followed by a rampaging melee of wild animals killing each other. Then, at noon, all the prisoners who had been condemned for execution on that date were killed. Everyone could see that these sentences were conducted as scheduled.

Most of the gladiators were slaves, criminals, or prisoners of war. Romans were only permitted to fight if they gave up their citizenship.

Gladiators were paired to provide spectators with a good show. Some fought with nets, some with clubs. Some wore heavy armour while others did not. Some were dressed as Romans, others as barbarians. Some fighters had fan clubs in attendance cheering them on. All fought until one fighter surrendered or was killed by the other. Those who surrendered might live to fight another day.

Winners of their bouts were awarded cash prizes, plus a palm branch of distinction. According to Peter MacLeod, director of research at the War Museum, those who were killed in the arena were simply fed to the wild animals in the Colosseum’s collection. However, some gladiators were buried by friends or burial societies.

Most of the gladiators were slaves, criminals, or prisoners of war. Romans were only permitted to fight if they gave up their citizenship.

“A Day at the Colosseum” also includes a dramatic sequence of video clips projected right into the centre of the room. The clips are of fighters as they might have appeared 2,000 years ago in Rome. The display has a contemporary feel, however. That in itself is not surprising: Televised broadcasts of martial arts competitions remain popular the world over.

In the second room of the exhibition, we learn more about the gladiators’ lives, including their diet—mostly vegetarian—and the armour they wore in the arena. Visitors can even try on a replica of gladiator’s helmet to see how it feels.

The third room presents the history of the Colosseum, completed in 80 CE and originally called “Amphitheatrum Caesareum.” Its five tiers of seating had a capacity of 55,000 spectators. Some of the funds that underwrote its construction were provided by the sack of the Temple of the Jews in Jerusalem in 70 CE.

The might of the Roman Empire and the importance of staged gladiatorial combat are briefly discussed in the last of the four rooms. Here, we see clearly the relationship between war and war games as policy and practice of state.

Rossella Rea, Director of the Colosseum in Rome, is the curator of the exhibition.  At the exhibition’s opening in June, she noted: “The amphitheatre games became over time a powerful tool for political propaganda.” The same can be said about international sport today.

A poster near the door of the exhibition states that the Colosseum’s opening festivities and games lasted 100 days. During those 100 days, 5,000 animals and 2,000 gladiators were killed.

Nearby is the children’s activity area. Here, as part of the exhibition’s in-gallery programming, children are shown how to make and decorate their very own gladiatorial shields with designs very like those used by the “real gladiators.” Do the kids know the dead were usually fed to the lions?

“Gladiators and the Colosseum – Death and Glory” is on display at the Canadian War Museum until Sept. 7. On Aug. 30 from 10 a.m. to 4 p.m., actors will demonstrate ancient Roman fighting techniques.