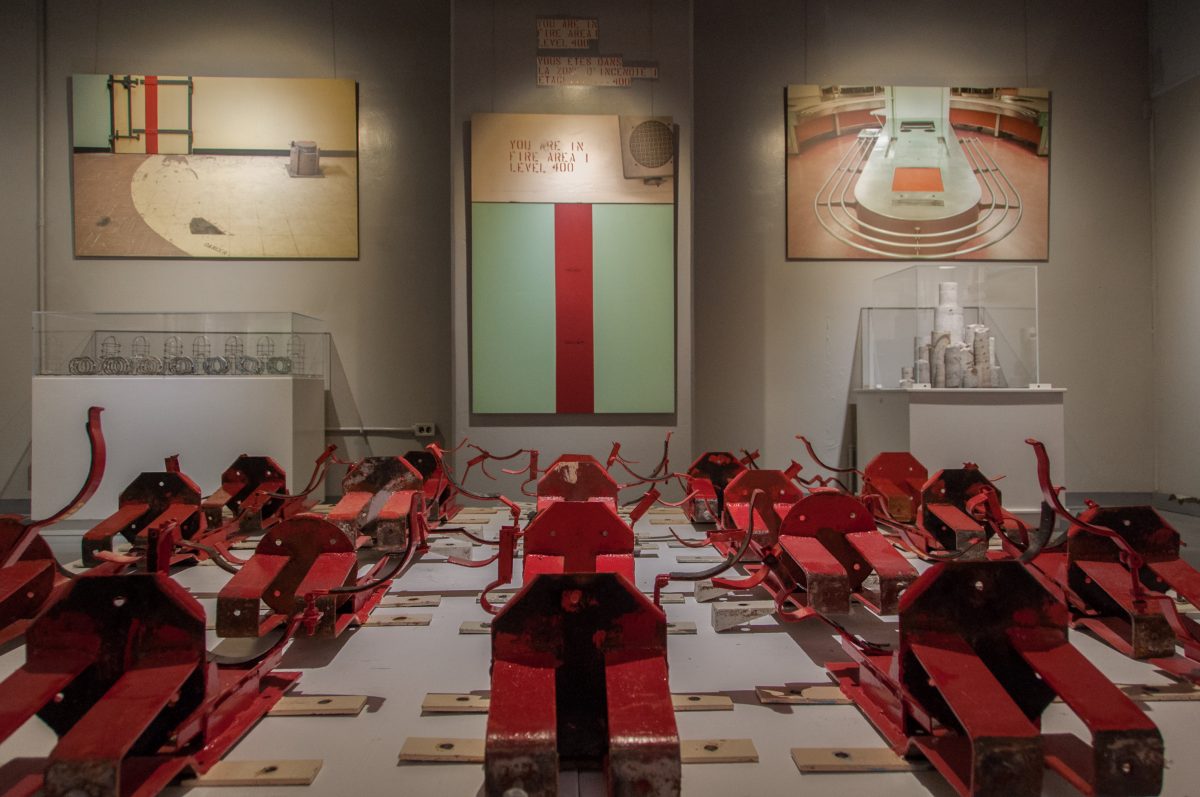 The Art of Making Do

Exhibit explores the why and wherefore of the Diefenbunker
BY Maureen Korp TIMENovember 24, 2015 PRINT

“Geometries & Auralities of Survival” by Jesse Stewart presents a program of site-specific music and visual art at the Diefenbunker: Canada’s Cold War Museum in Carp, Ontario.

Stewart, an interdisciplinary artist, is the museum’s 2015 artist-in-residence. In “Geometries & Auralities of Survival,” the artist examines the why and wherefore of the bunker. He sees it as a site, he notes, of “protection, entrapment, survival.”

The Diefenbunker is an obsolete bomb shelter. Informally named for former prime minister John Diefenbaker who authorized its building in 1959, the structure extends four stories underground. It was built to house and protect key government personnel for 30 days in the event of a nuclear war. Why 30 days?  In the 1950s, people believed no atomic war could last longer; moreover, it was believed that in 30 days, radiation levels would be quite manageable.

Today, visitors enter the Diefenbunker by walking through a 115-metre blast tunnel, accompanied by the echoes of their own footsteps.  Stewart used those sounds to create several site-specific compositions, or “auralities,” performed by the artist himself within the bunker.

“Boom,” for example, performed May 2 in the blast tunnel, is a composition for solo bass drum.   “Safe,” performed June 4, took place in the vault where all the Bank of Canada’s gold was to have been stored.

On level 400, in the Allard room, we find “geometries of survival,” a display of found patterns  identified within the bunker. They are presented in a mock gallery setting. There are photographs, display cases, and sculptural arrangements of patterns, or “geometries.”

In the room’s centre, for example, on a low white platform, the artist has placed 20 red fire extinguisher mounts in rows of five. In this setting, they look rather like papoose frames, even like small children napping with their feet drawn up.

Over against the walls are several glass display cases. Stewart has filled them with a perplexing selection of obsolete gear and gadgetry from the bunker’s storerooms. On one shelf, a grouping of brass water-sprinkler heads has been arranged in a star-burst pattern. Water sprinkler heads and splashing water… What if there was no rain?  What if there were no stars? The bunker has no windows to see what is outside. What if people were caught inside for a long, long time? What then?

On the walls of the gallery, the artist’s photographs document architectonic details from within the bunker. Support pillars are marked by black and white vertical stripes. Doors and frames are colour-coded. The patterns Stewart sees in his lens are very like those that Soviet photographer Alexander Rodchenko favoured in his work, too. Survival was a goal for both sides during the Cold War.

The exhibition continues until Dec. 4. It is accompanied by a catalogue with enclosed CD.