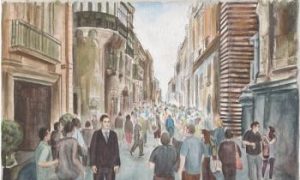 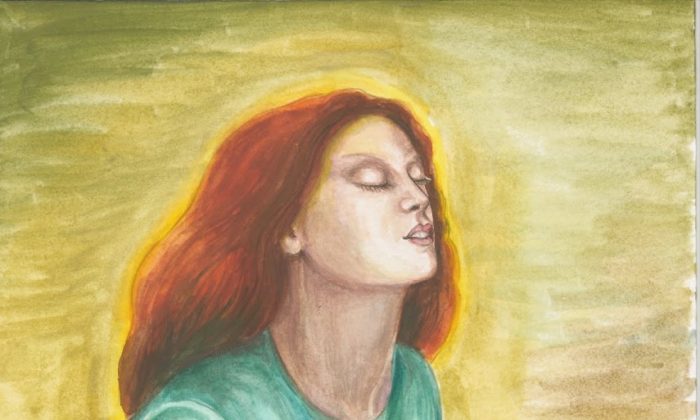 The Antidote: A Reading of ‘In an Artist’s Studio’ by Christina Rossetti

‘In an Artist’s Studio’

One face looks out from all his canvasses,
One selfsame figure sits or walks or leans;
We found her hidden just behind those screens,
That mirror gave back all her loveliness.
A queen in opal or in ruby dress,
A nameless girl in freshest summer greens,
A saint, an angel; —every canvass means
The same one meaning, neither more nor less.
He feeds upon her face by day and night,
And she with true kind eyes looks back on him
Fair as the moon and joyful as the light;
Not wan with waiting, not with sorrow dim;
Not as she is, but was when hope shone bright;
Not as she is, but as she fills his dream.

What is the role of art? Should it reflect the world we see around us—with its bread, beef, and bruises—or should it portray the world we want to see? Should it show people, warts and all, or spare their blushes?
In this sonnet, Rossetti contemplates the nature of art as she surveys an artist’s studio. With the male artist seemingly absent, we sense that we are invading his inner sanctum, pushing by paintings and going beyond screens to discover the truth at the center of his work.

For Rossetti, one fact is utterly clear: “One face looks out from all his canvasses.” Is her tone awestruck, contemptuous, or even frightened? You can imagine her turning from one image to the next and seeing the same eyes, over and over again, in a striking display of compulsion. No matter the pose—sitting, walking, or leaning—the face is the same. Queen, saint, or angel—it is the same. The subject of each painting dwindles into insignificance besides the artist’s obsession.

Feeding upon the woman’s face, the artist is a kind of vampire. He devours his own muse. Yet he also needs her. Working “day and night” he goes without sleep or rest, as if possessed. His images look back at him with “true kind eyes,” fixating him. Ironically, in the very moment he tries to achieve dominance, he shows his abject submission.

In the closing lines, Rossetti reflects on the discrepancy between image and reality. The beautiful woman in the paintings is “fair as the moon and joyful as the light.” Yet the model is “wan with waiting.” Perhaps she thought that the artist was captivated by her and her “hopes shone bright.” Perhaps she thought of marriage, even starting a family, yet artistic vision has somehow nothing to do with such happiness.

Rossetti uses repetition brilliantly to drive her point home. The emphasis on “one” stresses obsession as well as artistic sterility. This is “not as she is” she repeats emphatically, her stubborn insistence echoing the artist’s.

Many people choose to read the sonnet biographically, as Rossetti’s biting commentary on her brother’s treatment of Elizabeth Siddal—a working-class woman discovered in a hat shop who became a muse for the Pre-Raphaelite brotherhood. She was Beata Beatrix to Dante Gabriel Rossetti and Ophelia to John Millais. Engaged to the former for ten long years before marrying—and acutely conscious of his infidelity—she died of a drug overdose, possibly accidental, possibly deliberate.

Others have taken the poem as a feminist critique of the male gaze—a critique of direct relevance to today’s debates about the representation of women. In cinema, think of Alfred Hitchcock’s remodeling of different actresses to conform to his cinematic ideal of icy blonde glamour—a process that culminated with his sexual harassment of Tippi Hedren. In fashion, otherworldly models portray a physical ideal that some believe leads to anorexia. Does the cult of beauty destroy what it most honors?

In a wider sense, the poem is about the conflict between realism and romanticism. In this debate, another female writer offers a contrary view: “If one saw,” writes Ayn Rand, “in real life, a beautiful woman with a cold sore on her lips, the blemish would mean nothing but a minor affliction, and one would ignore it. But a painting of such a woman would be a corrupt, obscenely vicious attack on man, on beauty, on all values.” Art, she contends, does not document but “stylizes” reality.

With this Romantic sensibility in mind, the male artist in the poem can be seen in a more heroic light, for he delights in showing his beloved as bright-eyed and strong, whereas it is Rossetti who would rather see her as a victim. Is she imposing her own morbid, doom-ridden sensibility onto the model? Is it even possible to know anyone’s true self?

Christina Georgina Rossetti (1830–1894) was an English poet, most famous for her fantasy poem “Goblin Market” and her sonnet “Remember.”