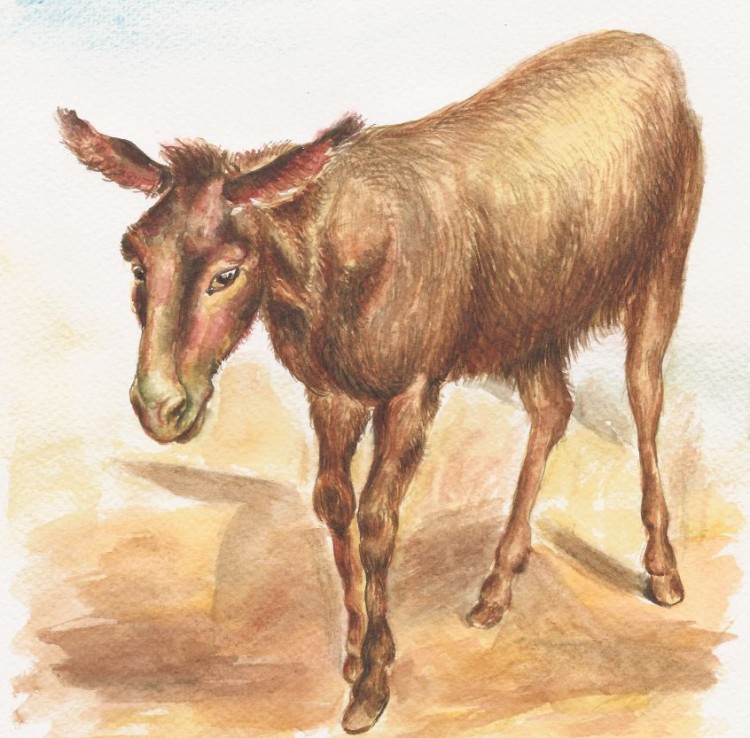 The Antidote: A Reading of ‘The Donkey’ by G. K. Chesterton

When fishes flew and forests walked
And figs grew upon thorn,
Some moment when the moon was blood
Then surely I was born.

With monstrous head and sickening cry
And ears like errant wings,
The devil’s walking parody
On all four-footed things.

The tattered outlaw of the earth,
Of ancient crooked will;
Starve, scourge, deride me: I am dumb,
I keep my secret still.

Fools! For I also had my hour;
One far fierce hour and sweet:
There was a shout about my ears,
And palms before my feet.
— Gilbert Keith Chesterton (1874–1936)

Walking into any card shop at Christmas, we see beautiful images of the Virgin Mary riding on a donkey. Guided by her husband Joseph, she is making the journey towards Bethlehem, where the baby Jesus will be born. This scene appears so cosy, so familiar, that we may not pay it too much attention—or we may assume it’s of no relevance to us if we are not religious. Chesterton’s poem may change that, forever.

The donkey we see on Christmas cards is often sweet and mild, his head bent down in an attitude of absolute patience and gently plodding loyalty. Chesterton’s donkey couldn’t be more different. This donkey is not sweet. He is not cute. In fact, he seems like a monster.

“Surely,” Chesterton asserts, this donkey was born once upon a time, “when fishes flew” and “forests walked.” He doesn’t belong to the rational present. He belongs to the mythical past, when people were wise enough to believe in the impossible, which is one way of saying that they found truth in art. Through the magical power of the imagination, this donkey becomes a universal symbol for us to contemplate.

What we see isn’t necessarily pleasing! In the second stanza, the donkey seems like hideous nightmare. He has a “monstrous” head, a “sickening” cry, and ears like “errant” wings. Is he demonic? At first glance he is a creature of the “devil”—an evil mockery of God’s fair creatures. But is the donkey really ugly, or merely perceived as such by the silly and the shallow?

As the poem develops, the “errant” quality of the donkey becomes more sympathetic. As a “tattered outlaw,” he sounds like a Romantic hero. His “monstrous” head is bloody but unbowed. He has a quality of quiet, brave defiance—a stirring resistance to the status quo. His “ancient crooked will” suggests a common sense wisdom that may look like stubbornness but comes from profound conviction.

The donkey calls on his tormentors to test him because he knows he will always be the victor. “Starve, scourge, deride me,” he says. These are dramatic words to read aloud. His claim “I am dumb” is a way of saying to those who torture him that he will never reveal his “secret” and thus will remain master of his fate. What may look like stupidity is his unswerving strength.

The imagery of scourging evokes Jesus on the cross; but in a wider sense, it evokes anyone who suffers for being different. I think of political prisoners who are persecuted for their beliefs. Children may also identify with the donkey if they have been bullied at school. Chesterton is said to have been so quiet as a boy that his teachers thought he was slow; in fact he said nothing because he was so far ahead of everyone else.

In the final stanza, it turns out that the donkey’s tormentors are the real fools. They have dismissed him as a beast of burden, but he has had his “hour”—the moment of glory that shows that life has been worth living. Chesterton reminds us that often it is the most forgotten people who matter the most. It is the noisy, blustering show-offs who pass into oblivion.

The final lines powerfully convey the donkey’s moment of glory. We feel the sense of pride in the donkey’s voice and hear the shouting around him. He could be Caesar. Quite what is happening is unclear until the final dramatic revelation that this is the donkey who carried Jesus into Jerusalem, surrounded by crowds of people paving the way with palm leaves. We are swept up into this turning point in history, dizzy and exalted.

But what of donkey in the Christmas story? Inspired by Chesterton’s poem, it is up to us to imagine his plain voice of wonder and his humble voice of truth.

Gilbert Keith Chesterton (1874–1936) was an English writer, most famous for his Father Brown stories.