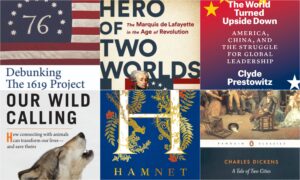 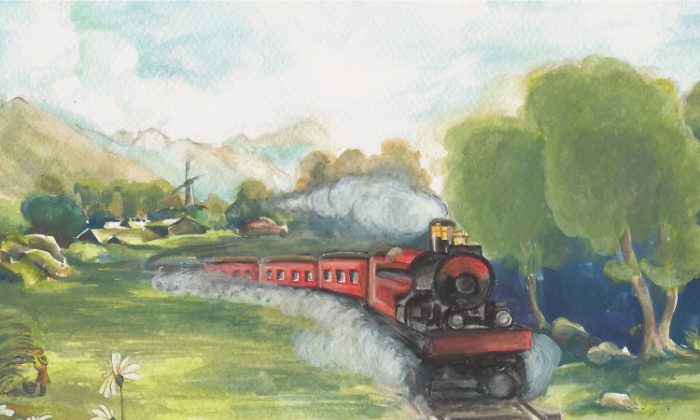 The Antidote: A Reading of ‘From a Railway Carriage’ by Robert Louis Stevenson

From a Railway Carriage

Faster than fairies, faster than witches,
Bridges and houses, hedges and ditches;
And charging along like troops in a battle,
All through the meadows the horses and cattle:
All of the sights of the hill and the plain
Fly as thick as driving rain;
And ever again, in the wink of an eye,
Painted stations whistle by.

Here is a child who clambers and scrambles,
All by himself and gathering brambles;
Here is a tramp who stands and gazes;
And there is the green for stringing the daisies!
Here is a cart run away in the road
Lumping along with man and load;
And here is a mill and there is a river:
Each a glimpse and gone forever!

The moment we start reading this poem by Robert Louis Stevenson, we plunge into the joy of pure momentum. We find ourselves on a train, gazing out of the window at the landscape frantically whooshing by outside. Faster than “fairies” and “witches,” the train seems to outstrip all the marvels and miracles of superstition. As Arthur C. Clarke said, “Any sufficiently advanced technology is indistinguishable from magic.”

Curiously, however, from our perspective—warm and snug in our seat—it is not the train that moves but all the “bridges and houses, hedges and ditches.” The mind remains still while the earth becomes a blur.

Even more than the meaning of the words, it is the pounding rhythm and rhyme that immediately attract our ears and arrest our attention. This is a poem made to be said aloud—and loudly! One moment we are flicking or clicking through The Epoch Times; the next, we scan Stevenson’s poem and are drawn into its phantasmagorical journey. With an emphatic “forever!” it suddenly ends, leaving us gasping and dazed.

Stevenson only applies the brakes in the line “Fly as thick as driving rain,” where the stress comes down heavily like this: “FLY as THICK as DRIving RAIN,” as if the train is chugging down a siding. “All of the sights of the hill and the plain,” the whole earth it seems, press against the train to slow it down, but then “in the wink of an eye” it gathers up pace, all-conquering.

The painted stations that “whistle by” appear so brilliantly neat as to be slightly unreal. There is a theatrical quality to their bright normality that hints at hollowness beneath. If the train ride is a metaphor for life, then is life after all—as the Buddha said—an illusion?

As if to throw the poem into a more symbolic light, human figures start coming into view. A child “clambers and scrambles, all by himself.” He seems lonely but hearty, happy to learn life’s lessons in the great outdoors, with scraped knees and blistered feet. A “tramp” gazes, mute. Is this the child in years to come? The “green” for making daisy chains brings us back to the innocence of childhood, though if we think of the phrase “pushing up the daisies,” the image takes on a darker meaning. A “cart” careens out of control, “lumping along with man and load” unlike the train that smoothly glides by. For once in literature, technology is a cause for celebration. Progress can be poetic too.

Stevenson was writing in the 19th century when the train was transforming people’s experience of the world. As Aldous Huxley wittily noted: “To us, the moment 8:17 A.M. means something—something very important, if it happens to be the starting time of our daily train. To our ancestors, such an odd eccentric instant was without significance—did not even exist. In inventing the locomotive, Watt and [George] Stephenson were part inventors of time.”

The more we read and recite the poem, the more it sinks into our mind and reminds us of the most significant journeys we have taken. I think of the train ride down to Devon that my family would take every summer for the holidays. At the first sight of the coast, everyone would shout: “I can see the sea!” Literature is full of train journeys, from Harry Potter getting on the magical Hogwarts Express to Dagny Taggart’s first exhilarating trip on the John Galt line in Ayn Rand’s “Atlas Shrugged.”

Snap, snap, snap. The camera-like frame of the window slices up reality into a series of flat, evanescent visions. The moment they appear they vanish, except in memory—guided by the muse and music of poetry.

Robert Louis Balfour Stevenson (1850–1894) was a Scottish novelist, poet, essayist, and travel writer. He is best known for his books “Treasure Island” and “The Strange Case of Dr Jekyll and Mr Hyde.”