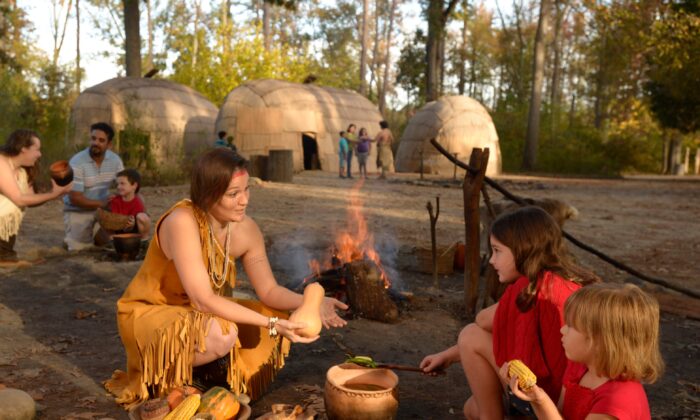 Young visitors enjoy the Powhatan Indian Village, which is based on archaeological findings, at the Jamestown Settlement. (Jamestown-Yorktown Foundation)
Traditional Culture

The Alpha of America: Jamestown and the Beginning of Our Story

JAMESTOWN, Virginia—“Jamestown,” says Dave Givens, director of archaeology at this historic site, “is the alpha of American history, and Yorktown is the omega.”

Givens, whom I interviewed on a recent visit to America’s first English colony, meant that Jamestown was the first permanent English settlement in the New World, and that nearby Yorktown, where American and French forces defeated the army of Lord Cornwallis, was the battle that established our republic.

Like everyone I met at Jamestown this rainy day in early September, Givens was passionate about American history. He was enthusiastic and polite, willing to share his time with me—we talked for 90 minutes—and dedicated to spreading the word about why Americans should visit this site.

For over a century, archaeologists have explored Jamestown. Givens and his colleagues have themselves spent untold hours digging into the soil here, unearthing the secrets of the English settlers and Native Americans who bartered goods and fought vicious wars against each other, and whose blended cultures can be found in the artifacts they left behind.

Here is just one example of this mixing of cultures. When the Romans ruled England for 400 years, they brought sandstone to the British Isles. Centuries later, the British used some of that sandstone as ballast for their ships. The Powhatan tribe surrounding Jamestown took segments of that ballast and turned them into nutting stones, small rocks useful for cracking nuts.

The museum that Dave Givens and his predecessors have created, the Nathalie P. & Alan M. Voorhees Archaearium, displays only a small fraction of the more than 3,000,000 artifacts taken from the earth of this settlement: armor, swords, parts of other weapons, jewelry, broken bits of pottery and clay pipes, and a myriad of other objects. Here, for example, I saw a piece of slate on which some unknown colonials had scratched drawings and words: a tree, a man in 17th-century dress, four heraldic lions, numbers, and “Abraham.”

Here, too, are the skeletons discovered during various excavations: one a possible victim of murder as determined by modern forensics; the remains of JR10463, now almost certainly identified as Bartholomew Gosnold, who was instrumental in establishing the colony; and a teenager, named Jane by her discoverers, who in the 1609–10 “Starving Time” was likely cannibalized after her death.

As I wander through this museum, the outdoor remnants of colonial buildings, and the working archaeological sites, the privation suffered by these people and their courage and grit in the face of adversity roused my sympathy and amazement. During the Starving Time, for example, when the Powhatan besieged the tiny fort of this settlement, when disease was rampant—the brackish water of this place killed scores of settlers over the years—and when the English colonists were reduced to eating rats and dogs, only 60 of 250 settlers survived.

Digging Up Our Democracy

To better understand what Givens and his associates do, I highly recommend a remarkable newly released book, “Church & State: The Archaeology of the Foundations of Democracy.” Filled with vivid photographs and reader-friendly explanations, this guide offers an excellent behind-the-scenes tour of Jamestown sites, specifically the church dig begun in 2010, and introduces the archaeologists, historians, scientists, and others who share their expertise to better understand the past.

The days of Indiana Jones are long gone. Today there are teams of experts and a technology that can read what is buried beneath sand and clay, and reveal in a sterile lab the cause of death and even the profession and possible identity of human remains.

“Church & State” takes us into laboratories at the Smithsonian. It introduces us to Dr. Turi King, a geneticist at England’s University of Leicester, who teaches us how DNA analysis and genealogical research may someday reveal the descendants of these colonists.

Givens and his team end “Church & State” by reminding us that “the first representative governing body to be held in America met in the choir” of Memorial Church in Jamestown. “Here the foundations of our nation’s democratic experiment were laid, enshrining the fundamental principle of our government and all democratic governments, that no one is above the law; and finally, the establishment of representative government based on the maxim that governments of free people rely on the consent of the governed.”

Another Take on Jamestown

Perkins spent two hours walking me through the museum, and despite the rain, escorted me to the outdoor living-history exhibits: the Powhatan Indian village, the re-creation of the wattle-and-daub houses of the English settlers, the life-sized replicas of the three ships—Susan Constant, Godspeed, and Discovery—on which the colonists crossed the Atlantic, and the fort, church, and other buildings that are also reproductions of Jamestown’s actual buildings.

Like Dave Givens, Tracy Perkins proved an affable and able guide with a sense of humor and a deep love for Jamestown and history.

With its 30,000 square feet of exhibition space, the Jamestown Settlement museum was more than a bit overwhelming, particularly as I had allotted only three hours for my visit. Here are displays and exhibits about such figures as John Smith, Pocahontas, and Nathaniel Bacon of “Bacon’s Rebellion” fame, all set around six major themes: Before Jamestown, Three Cultures, Virginia Company of London, Founding of Jamestown, 1619, and Jamestown 1699. Dioramas and short films mixed with historical objects and paintings allow visitors to immerse themselves in the history of this colony.

Particularly striking were the exhibits showing the cultural interactions between the Native Americans, the English settlers, and the enslaved Africans. These exhibits demonstrated, for example, both the similarities in tools and agricultural practices of these peoples as well as their differences, and also demonstrated, as Dave Givens had stressed, the connections in their cultures.

Now for some general impressions of the afternoon when I stepped from the 21st century into the 17th.

First, everyone in both of these museums, from the cashier at the Jamestown Settlement Café to clerks at the front desk, could not have been kinder and more helpful. (If you eat at the café, I highly recommend the 8-inch pizza, which was laden with vegetables and a delight to the taste buds.) We were all wearing masks, but I saw lots of friendly, smiling eyes.

Because of the ongoing pandemic lockdowns, both of these museums have witnessed an enormous decline in the number of visitors and have seen revenues from admission fees shrink. The day of my visit, for instance, occurred during a week when the museums catered specifically to homeschoolers. While a few families were eating in the cafeteria or wandering through the re-created fort, there were no lines to buy tickets, no bustling crowds inside the museum galleries.

As Tracy explained, not only are there fewer tourists, but the pandemic and distance learning have also kept away the school children who normally visit the museum by the busload.

But more than money is at play here. Both Tracy Perkins and Dave Givens passionately believe that the museums they represent demonstrate to visitors the complexity of history, the nuances of the past so often lost in today’s debates about history and culture. As Givens told me several times during my conversation with him, “Tell people to come here and see where America started.”

Proud to Be an American

At day’s end, after my long-time friend John and I had eaten a delicious meal at Paul’s Deli & Neighborhood Restaurant and returned to the Griffin Hotel (which is located just across the street from Colonial Williamsburg), John asked, “How are you going to write about everything we saw today?”

That afternoon had overwhelmed my thoughts and senses in two ways.

First was the sheer amount of information I’d absorbed through talking with my guides and strolling through the museums. John and I had spent a little over five hours in Jamestown, and to experience everything would have required at least an entire day.

Second, and much more importantly, my love for my country—patriotism, if you will—received a much-needed shot in the arm.

Over my lifetime, I have visited many museums in places like Rome and Paris, New York, Boston, and Washington D.C., but none of them had affected me as strongly as Jamestown. Here on this Virginia peninsula begins the history of our country. Here were those long-dead people—white Europeans, black Africans, Native Americans—whose story is our story. Here were people like Tracy, Dave, and all the other visitors to this venerable place who care about that story and who hold their country dear.

Late that afternoon we left Jamestown, but Jamestown didn’t leave me. The alpha of America had revived my pride in our nation and restored my faith in its ideals.

That night, for the first time in months, I slipped into sleep in love with my country.

A Note: If you can’t make the trip to Jamestown, and particularly if you are teaching young people, whether at home or in a classroom, I urge you to explore the websites for Historic Jamestowne and the Jamestown Settlement. Here you will find histories, webcasts, lectures, galleries, and many other educational resources.