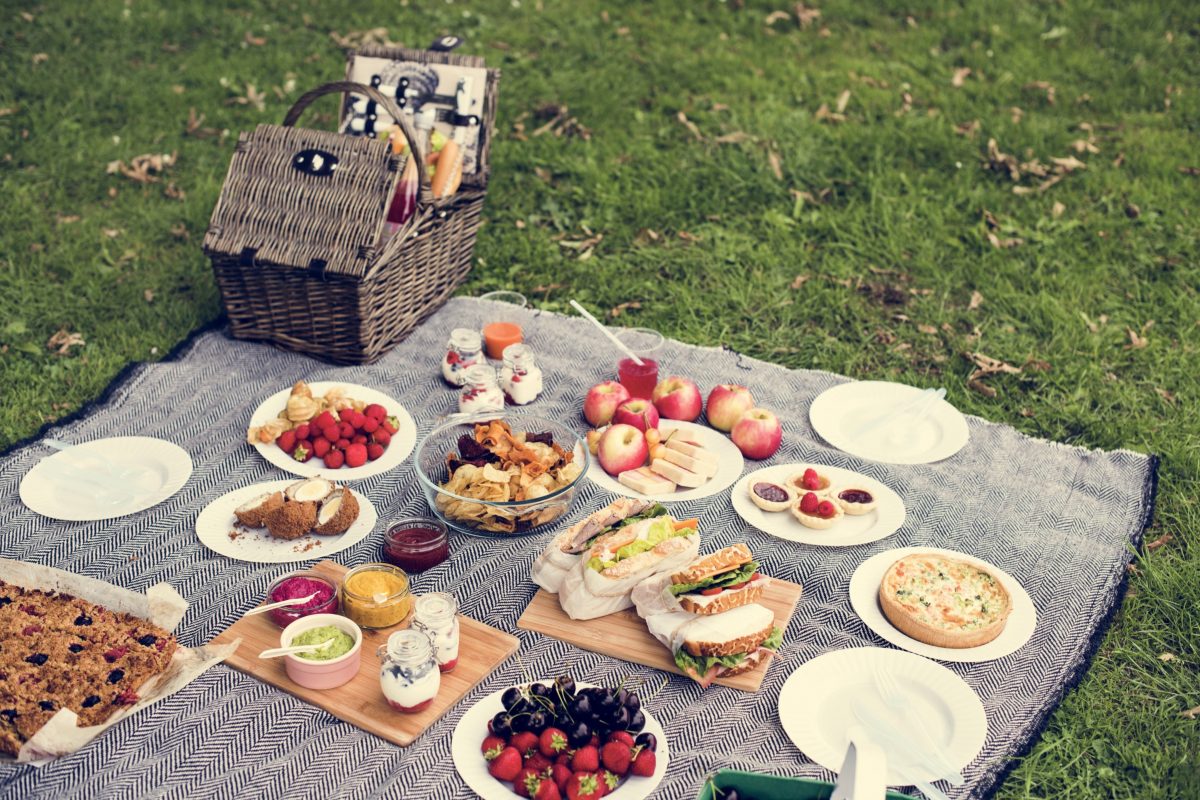 Picnics are one of summer's simplest pleasures. (Shutterstock)
Food

The Allure of the Picnic

There are few better ways of whiling away a summer afternoon than with a picnic.

Food just seems to taste better outdoors, especially when spread out on a blanket in the grass and shared with loved ones. And picnicking this time of year, when the sun is generous and the breeze is warm and sweet, is especially irresistible.

The weather draws us to the beach, up mountains and down to riverbanks, to local parks and humble backyards, to unfurl our blankets under open skies and feast.

People have been eating outdoors since time immemorial, whether by necessity or for pleasure, and picnicking long since before the term existed.

“The Romans picnicked,” said Walter Levy, author of “The Picnic: A History.” “People were doing it all the time, but nobody had a name for it.”

The word “picnic” didn’t come about until the late 17th to the early 18th century, from the French “pique-nique,” Levy explained. And at the time, the term referred not to the al fresco dining that we associate with it today, but to the act of splitting the bill at a restaurant, or a potluck-style indoor dinner party, where each guest contributed a dish or paid a fee to the host. (Despite the difference in setting, the spirit of sharing was the same.)

This style of dining was imported to England from France in the early 1800s, most notably in the form of a short but boisterously lived Picnic Society in London. A group of some 200 wealthy Francophiles, the club threw spectacular soirees full of dancing, gambling, and great feasts of food and wine, to which each attendee was expected to contribute.

“They did this by drawing lots; you didn’t know what you were going to have to bring until you picked out of a hat,” Levy said. “Some people got away with bringing oranges, and some people had to bring very expensive things—foie gras and mushrooms and pigeon pie.”

Over the next decades, the term began to shift to apply to such meals held in the great outdoors. Memorializations in art and literature helped: Think of the famous Box Hill picnic in Jane Austen’s “Emma” in 1815; or, across the pond, Thomas Cole’s idyllic painting of “A Pic-Nic Party” in 1846. By the 1860s, the transition to the picnic as we know it was complete.

The rise of picnicking’s popularity as a social ritual “coincides with modern history,” Levy notes in his book, pointing to the shift to urban cities from rural villages. With improvements in industrialization, technology, and transportation in the late 19th and 20th centuries, more people began working indoors, boxed into cities and routine schedules that eroded their connections to the natural world.

Picnicking provided a temporary escape: a break from the ordinary and the drudgery of work, and a return to nature and our deeply ancestral need to commune with it.

The same holds true today. We’re called to sit closer to the earth, feel the dampness of the grass through too-thin blankets, reanimate senses dulled by screens and machinery, and fill our lungs with fresh air.

And so, we head for the country—“or even some facsimile of country, a lawn or a grove of trees,” Levy writes.

“If you think about it,” he continues, “the more urbanizing and industrialization create barriers to the country to keep people in towns and cities, the more people are apt to picnic.”

New York City is a case in point. At the first signs of warm weather, weary workers emerge from cramped gray labyrinths to spill into Central Park and other such green oases—or flee the confines of the concrete jungle entirely.

On summer’s first Saturday, a balmy, breezy beauty of a day, a friend and I joined the crowds that headed to Central Park, picnic blanket in tow. We were met by a sea of fellow picnickers and sunbathers, their colorful blankets dotting the green. Couples and families sprawled out on the grass, giant groups of friends pieced together blankets to fit the whole gang, solo loungers cozied up with books and tablets, and everyone ate—from cheese and grapes to Tupperware-packed feasts, to burgers and fries from Shake Shack.

I relayed the experience to Levy. “New York City is a picnic town,” he simply wrote back.

The list of sweets and tea to follow was twice as long, including two blancmanges, dozens of cakes and pastries, baskets of fresh fruit, and bread and six pounds of butter; while drinks were to include six bottles of sherry, six bottles of claret, and “champagne a discretion.” (“Water can usually be obtained, so it is useless to take it,” she was careful to note.)

Fortunately, such elaborate feasts are purely optional. In fact, one of the great pleasures of a picnic is the ease with which it can come together—conjured up from whatever you have on hand, prepped ahead or bought from the store, or cobbled together from shared contributions.

In essence, “food at a picnic is anything that’s portable,” Levy summed up. With that requirement fulfilled, you’re limited only by the confines of your cravings and creativity, free to lean as simple or sophisticated as you please. Fortified by sun and fresh air, a simple grazing board of crackers, cheese, and charcuterie is just as nourishing as a full meal of cold roast meats and salads and pies.

And in the end, as with many food rituals, picnicking is less about the food itself, and more a matter of spirit: the joy of being outdoors, surrounded by the beauty of nature and the company you’ve chosen.

At our Central Park outing, my friend and I assembled a patchwork lunch from what looked good at the farmers market: plump cherries and blueberries, fresh ricotta, pea shoot pesto as green and bright in flavor as in color, and a crusty baguette. We laid out our found treasures under the shade of a tree. To us, the humble spread was as good as any feast.

And when the food was gone, and our bellies full, we feasted still—on the warm breeze, the dancing branches above our heads, the surrounding green, each other’s easy company. On the simple, invigorating pleasure of doing nothing, if but for a single afternoon.

“This,” my friend sighed, lying down and closing her eyes, “is why we picnic.”