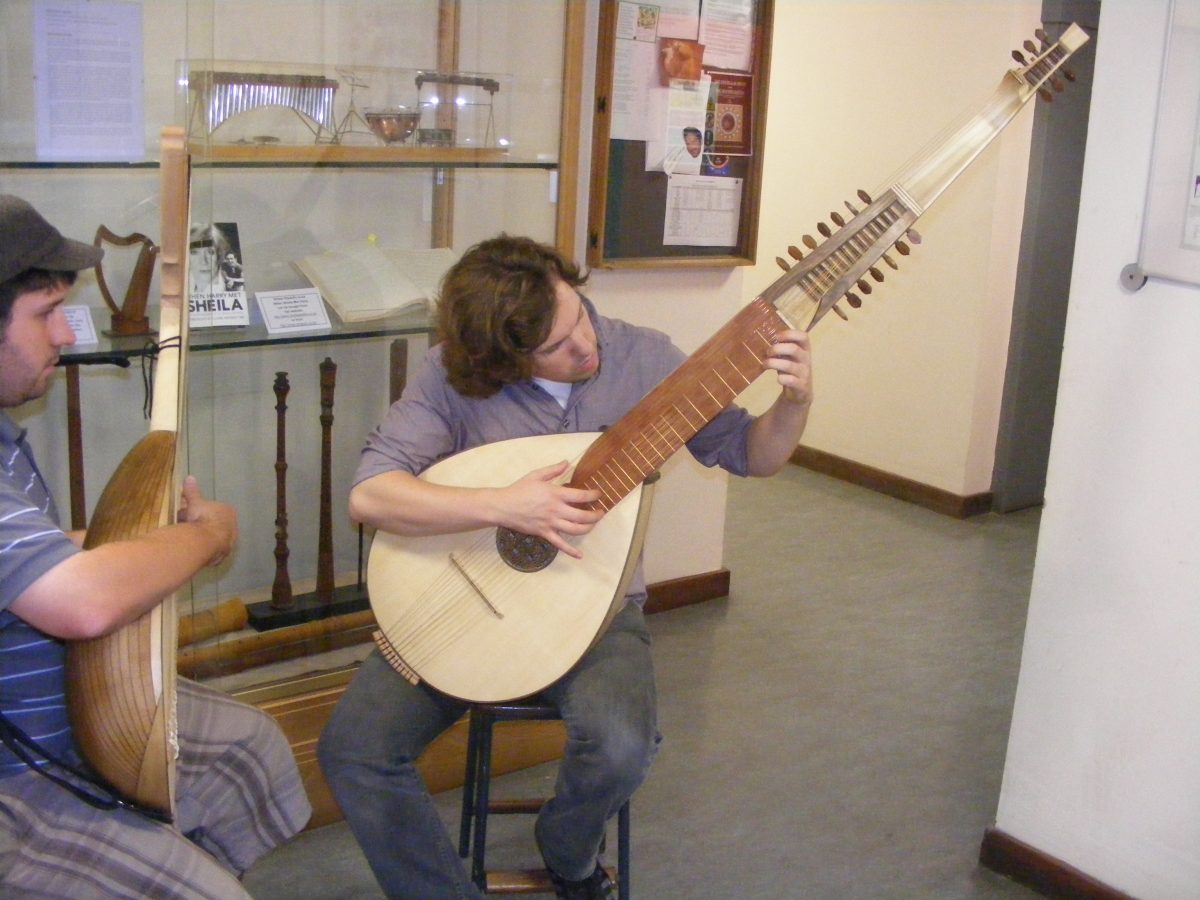 The 21st-Century Making of a 17th-Century Ceterone

Meet musical instrument maker Alex Potter. Here, he shares how and why he researched and constructed the Renaissance ceterone.

The Epoch Times: Why do you think it is important to construct early or lost musical instruments?
Alex Potter: That’s a very good question. The first reason, which is kind of the obvious answer that an early musician would give, is so that the music survives. But unless you have the instrument, or close to the instrument that it was written to be performed on, you would never hear it the way the composer intended, and that is true for almost all classical music.

It has only been since the second half of the 20th century that they really started to have a strong movement in performance toward using authentic instruments and authentic tuning … so that you can get a better idea of what the composers intended. So from that point of view, it’s fairly important to have the idea, if nothing else, of what an early violin, an early piano, or whatever, would’ve sounded like and how it would’ve been played.

The other answer, which, I think, is maybe more of an instrument maker’s answer, is that a lot of times through history, instruments evolved for reasons other than sound. They evolved for things like cost. If it was cheaper to use a certain kind of string, then the builder would tend toward using that kind of string. This meant that, historically, features of instruments that were good, that produced a good sound, that produced a different sound, [might] have been lost.

You can learn tricks and, for instance, features and little details from the past which are actually very relevant and can give you very good results.

To give you an example, there is a technique of building instruments like guitars whereby not all of the strings are the same lengths. … This is described as fan-fretted, because all the frets are at slightly different angles from each other. It looks like they fan out. This is currently incredibly popular among some electric guitarists, jazz guitarists, and players of metal music. But it really goes back to about the same time that the ceterone was being built, and it had to do with the strings that were available at the time. [This construction] was later discarded because it was complicated, and there are easier ways of doing things.

So that is a historic feature, which has, in the last 10, 20, 30 years, been reintroduced for the guitar. So having a good understanding of early instruments can actually be very useful.

There are very few things that people come up with today that haven’t been done at some point in the past. … Understanding the history of things, and understanding heritage [is helpful] because you never know what’s going to become relevant again.

The Epoch Times: How did you go about reconstructing the ceterone?
Mr. Potter: It was an interesting challenge … It was almost more of an academic exercise than an exercise in craftsmanship.

There is one original ceterone left. … It would seem it is in a museum in Florence, [but] no one has seen it for a very long time. There are some theories that it got destroyed, or very badly damaged, in a flood about 20 years ago, but no one’s really been able to work out where it is now.

I haven’t seen the original one, but what I did have was a series of, I think, four or five black-and-white photos. I had a brief description of it, and the measurements of the two different string lengths. The ceterone has essentially two sets of strings divided as follows: seven pairs of shorter strings over the frets, which are played in the manner of a lute or guitar, and six long strings that are unfretted and played with the thumb of the right hand in the manner of a harp.

There is one piece of music, which, for various reasons, is the only piece of music that we can absolutely know was intended to be played with the ceterone. In the 17th century, spelling was a bit optional, and the ceterone has a very similar name to a fairly common kind of lute called a chitarrone. So, generally, when you see something that looks like that word, you assume it’s going to be the chitarrone.

There’s this one piece of music in an opera [“L’Orfeo”] by Monteverdi, where toward the end of the final act he has written, sort of in the margin of the original score, directions for the musician, which says the continuo instruments [the bass instruments], begin playing again with a chitarrone and a ceterone. That’s the only time you see them differentiated in a piece of writing that is attached to a piece of music.

[That note] was very useful because it was published; we have a date [1609] for it, which means it helps us place the instrument in a historic context, and we know it was in the place where this was performed in Mantua, Italy.

So you have to work out the length of the strings, what they are made out of, what the music says, the position of the frets on the fretboard, which will give you some idea about the intervals and the notes that it was better at playing, and gradually you can piece together these little clues to work out almost how it would’ve been tuned or what the options for tuning it would be to make it best able to play this music. From that you draw conclusions about what the techniques for playing it would be, and then you use that information, which to a degree is intuitive as a musician, to work out things like the construction.

You know what it is going to look like, you know the size of it; but how to hold it, what kind of neck profile it needs to comfortably accommodate the playing technique, for example, …that process alone took me eight or nine months [of a 12-month master’s degree].

The Epoch Times: Do people still make ceterones today?
Mr. Potter: People have made them before. What they have generally done is to try to copy the original one as close as they can. So I would guess that, in the world, there are less than 10, I think. I’m not 100 percent certain.

[Potter’s research suggests a different type of tuning than how people originally thought the ceterone was tuned].

The Epoch Times: Last thoughts on the ceterone?
Mr. Potter: It is a wonderful thing to have; it always gets a lot of attention. If I am ever doing shows or open studio events or anything like that, I always have it there prominently displayed. It has kind of become almost like an old-fashioned shop sign. It intrigues people. They want to ask about this 5-foot-4-inch, 20-string tuned instrument that they have never seen before.

I learned quite early that I always need to have a recording of the ceterone to hand out, as for so many people the first question is “What does it sound like?” Seeing as it takes the best part of half an hour to tune, it’s a bit impractical to actually play it every time it gets an outing.