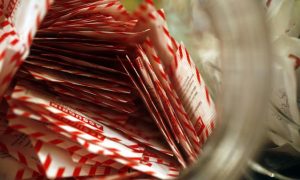 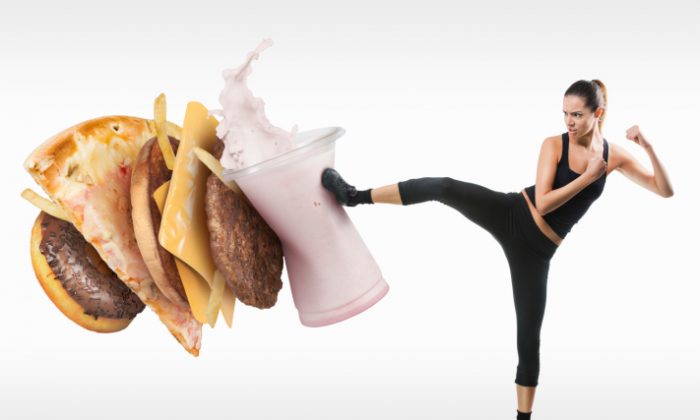 A Doughnut Will Cost You Two Miles

Unless you’re a dedicated dieter, you probably pay little mind to your calorie consumption. But what if instead of calories your favorite foods were labeled in terms of physical activity? Would this have more of an influence on your eating habits?

That’s the question behind a $2.3 million study sponsored by the National Institutes of Health.

The idea stems from an Affordable Care Act strategy targeting America’s obesity epidemic. The provision requires restaurant chains with more than 20 locations to clearly identify the calorie count for each food item on the menu. Regulators hope that if consumers can easily spot high caloric foods, they’ll be more likely to make appropriate choices and lose weight as a result.

The calorie concept seems simple enough: A calorie is a measure of energy, and we pack on the pounds when we eat more energy than we use. But research has shown that this number doesn’t hold much meaning for many consumers, and calorie counts—even if prominently displayed—may not have the kind of impact regulators are hoping for.

Now, consider high caloric foods in terms of walking, and the consequences become hard to ignore.

Got a craving for a double cheeseburger? It will cost you a 5.6-mile walk. How about a large soda? That’s another five miles. Add a doughnut? Tack on an additional two miles.

Researchers from the University of North Carolina (UNC) at Chapel Hill will test the value of this physical activity metric to see if it has more of an impact on eating habits than calories alone.

The Effects of Physical Activity Calorie Expenditure (PACE) Food Labeling study will monitor purchases in one cafeteria—where food items are labeled only in terms of calories—and compare it to meals purchased at a similar cafeteria where menu selections have an additional label describing the amount of walking required to burn them off.

“I think we may be a little numbed to the calories,” said Dr. Alice Ammerman, co-lead researcher and professor in the Department of Nutrition at UNC’s School of Public Health and director of the Center for Health Promotion and Disease Prevention.

“It’s [calorie counting] kind of an abstract notion. But when it comes to actually walking a certain distance, we all have a greater sense of what that means in terms of how much effort that’s going to take to do it. That’s the thinking behind it.”

Anybody who has used a treadmill may have already seen this metric in action. In addition to gauges for speed and heart rate, exercise machines also monitor something called metabolic equivalents or METS. This number shows just how much effort calorie burning requires.

“It’s always kind of humbling because people think they’ve worked really hard, but it doesn’t always add up to that many calories burned,” Ammerman said.

How calorie counts factor into our health isn’t always clear. For example, the body deals with 200 calories of Brussel sprouts differently than 200 calories of cake. Additionally, children and teens often utilize calories more effectively than a 40- or 50-year-old adult.

The exercise equivalency metric isn’t perfect either—age, weight, and other factors all play a role in how much walking is actually required to burn off a meal. In the interest of brevity, PACE researchers aimed for an average. Their label describes a middle-aged individual of average weight.

“It would be a very messy label if we tried to put all those parameters up there. So we tried to pick something sort of in the middle and to also think of it as a pace of walking that would not be unduly high exertion,” Ammerman said.

PACE researchers want to see how consumers confronted with a new metric will use the information. For example, if the double cheeseburger with extra sauce looks like more work than it’s worth, diners may instead opt for a plain single burger, which clocks in at only 2.6 miles of walking. It may not be as delicious, but they’ll save three miles by holding back.

“Or they may say, ‘Well, I’ll go ahead and get the higher calorie hamburger, but I’m going to go to the gym and work it off,'” Ammerman said.

Evidence already suggests that the metric has the potential to shape behavior. PACE co-lead investigator Dr. Anthony Viera, associate professor in the Department of Family Medicine at the UNC School of Medicine, used a web-based survey demonstrating that people react more strongly when they saw high-caloric foods in terms of physical activity.

Another study, published online Oct. 16 in the American Journal of Public Health, found that low-income black adolescents were less likely to purchase sugar-sweetened beverages when the drinks were identified with exercise equivalents. Other research has shown that nonwhites and younger people were more likely to favor such labels.

If the PACE label proves effective, federal regulations may one day be expanded to include a physical-equivalency label alongside the calorie count, but that’s still a long way off. The PACE study will take four years to complete, and additional research will be required to determine an evidence-based strategy.

“Like everything with science, we need to get some accumulated evidence from a variety of studies and settings before we are really ready to say that this is an improvement,” Ammerman said. “But I suspect there may be people who catch on to the idea and try it out in their own settings, just to try to encourage more healthful choices.”