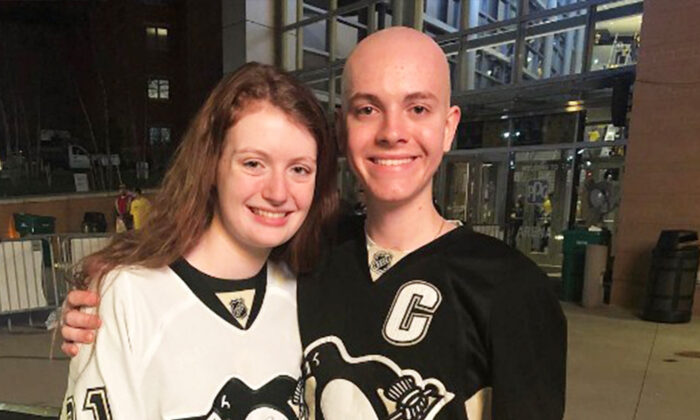 Teen With Cancer Raises $28,000 for Dream Wedding, Dies Months After Tying the Knot

A 17-year-old with terminal cancer believed his only regret in life would be not marrying his long-term girlfriend. His touching story went viral, and with the money they raised through donations, the young couple had a fairytale wedding. He then passed away, only months after tying the knot.

Brady Hunker was only 15 when he was first diagnosed with a rare type of bone cancer called Ewing sarcoma. Despite the hard times he was about to face, his girlfriend, Mollie Landman, remained by his side. “She was always there to just give me a hug or just sit next to me,” he recalled, per WLWT.

It took several months of chemotherapy before he entered remission. However, sadly after just one year, “cancer came back with a vengeance,” Hunker wrote on his GoFundMe page.

His sarcoma had spread and wasn’t responding as well to treatment the second time around. It led the young man and his girlfriend to ask themselves some difficult questions. “What would we regret if I heard the worst news, that I started getting worse and worse and could pass away?” he recalled. And the only answer he could think of was not marrying Mollie.

Since meeting back in the 7th grade, the young couple had been inseparable. Hunker’s devastating diagnosis had only served to tighten that strong bond. “I couldn’t think of anyone in the world at our age who would’ve been by my side and stuck with me through this,” he said, per Good Morning America.

This past weekend, Brady took me up to Jumonville to see the cross. Once we got up to the cross, Amy O'Brien Craig…

So he went ahead and proposed to his then-18-year-old girlfriend during the Easter weekend in April 2019. Hunker then started a GoFundMe page to make sure his bride “had the wedding she always dreamed of.”

The fundraiser was a huge success, and the teens raised nearly double their initial goal of $15,000. “We never even dreamed that this page would’ve blown up the way it did and can’t even comprehend their generosity,” Landman shared.

The young pair tied the knot in July 2019 in what Landman described as “a truly wonderful wedding day.” She also posted a heartwarming video of the big day.

“I know that whatever this crazy life throws at us, we will face it head-on in each other’s arms,” Hunker recited while standing at the altar during the ceremony.

Sadly, a few months after the wedding, on Nov. 25, 2019, Brady Hunker lost his battle with cancer. A family member posted the news of his passing on his Facebook group, Brady’s Power Play. “This morning, our precious, amazing boy got to be embraced by his Savior, Jesus. The pain is gone. The battle against this horrific disease is over,” the post read.

In a touching blog post titled “Joy,” the young widow poignantly wrote about the solace she found in her faith, which helped her begin healing from her immense loss. “Since my husband’s death, countless people have told me how strong I am,” she wrote. “I realize now more than ever that I am truly weak on my own. But, since Jesus’s holy power resides in me, I have the strength of the resurrection.”