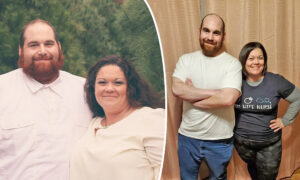 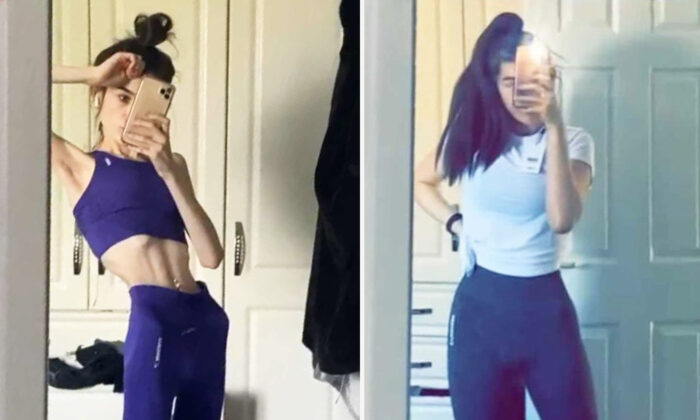 Ellie Makin, from Manchester, England, says that healthy diets and exercise plans have helped her beat her life-threatening eating disorders after she weighed a mere 77 pounds (35 kg) at her lowest.

The 17-year-old would spend hours on the running machine each week in a bid to “stay thin.” But after suffering a stroke due to her declined health and skeletal frame over a year ago, Ellie says she was shocked into wanting to recover.

Recalling what led her to the weight-loss obsession, Ellie shared a vivid memory of being “fat-shamed” from when she was around 10 years old.

“I was at a Woodland park and I was just playing and this boy said to me ‘move out the way you fat git,'” she said. “That comment was always in my mind.

“Kids at school also used to tease me regularly about my weight, so a mixture of these things made me decide that I needed to lose weight. So I began eating less food, and as time went on and I started to lose weight, I just ate less and less until eventually, I wouldn’t eat for weeks.”

Elie said she had had a gym membership since she was 13. However, after falling into the trap of eating disorders, she “obsessively used the gym” to help aid her weight loss instead.

“I would go to the gym seven days a week and focused on cardio, to burn calories and fat,” she said. “I was mainly running and swimming, and I had a goal to meet each time. I wouldn’t get out of the pool until I did at least 100 lengths of the pool. I would survive off sugar-free mints and Pepsi Max to keep me going during the weeks that I wouldn’t eat.”

She added: “However, after starving myself for weeks at a time, I became aware of the fact that there was a way that I could eat and then get rid of it by making myself throw up.”

This misguided way of getting rid of extra calories pushed Ellie to develop bulimia, a psychological eating disorder where people binge eat and then purge by self-induced vomiting or indiscriminate use of laxatives.

“It started because I had such a strong desire to be skinny, but in the end, I just couldn’t stop or control my habits,” she said.

In her last year of secondary school in January 2019, Ellie decided to seek help for her eating disorders. However, she claims she was discharged by doctors and told she was not sick enough to receive help.

Ellie says she felt helpless and being rejected caused her to spiral down further.

“This made my condition so much worse because I felt like I was reaching out for help and I was being told I couldn’t have it,” she said. “It felt pointless, so I just completely withdrew and my binging and purging increased.”

Her condition got worse around the time of her GCSE exams (General Certificate of Secondary Education).

“I was eating lots due to stress and then I would make myself throw up so I didn’t feel guilty about eating,” she said. “It got worse and worse and weight was just rapidly falling off of me. During a binging session, I would consume about 4,000 calories and drink at least three liters of fizzy drinks a day.

“And then I would force myself to be sick and get it all out of my system.”

By October 2019,  Ellie had become severely frail and due to an imbalance in her electrolytes as a result of purging, she suffered a small stroke. She lost all sensation in her body and couldn’t move at all.

She was rushed to hospital and had to spend the night there. After being scared for her life, Ellie decided she wanted to turn her life around and embark on a journey to recovery.

“I wanted to stop. I didn’t want to keep putting myself, my family, and my friends through all of this pain,” she said. “I got into weight lifting during my recovery. I used to use the gym to help me become skinnier, but now I am able to use it to help me build myself back up.

“I am getting stronger each day and I am now able to lift weights that are about five times heavier than my current weight.

“I was determined to do the recovery myself. So I found myself a dietician, who advised me and would check up on me, but I made all of my meal plans and nutritional drinks by myself.

“After I started to correct my diet and gain strength, I was able to forge a healthier relationship with the gym. This is where I found my passion for weight lifting.

“It has been amazing to rediscover my love for it and to focus on weight lifting. It has really spurred my recovery as I am building muscle and becoming stronger all the time.”

“I can now see food as a fuel to help me move forward with weight lifting and continue to grow stronger.

“I am now nine months into my recovery and it feels amazing that I have been able to do this by myself and find a new passion off the back of it.

“I feel so proud and so strong. I can’t wait to see how much progress I make with lifting weights and to gain even more strength.

“I know I am capable of anything now.”