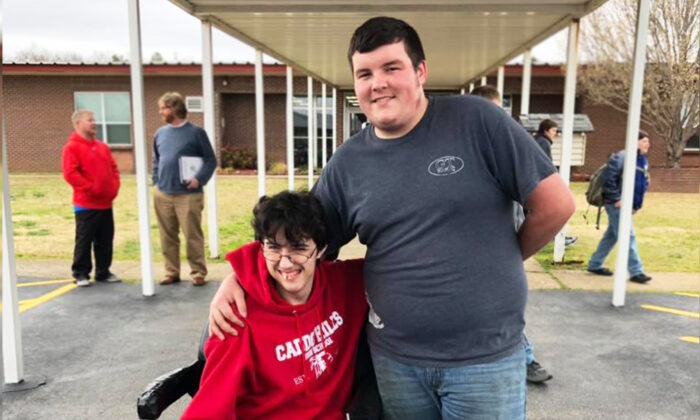 Friendship is a powerful bond that really helps enrich our lives. Great friends are an essential part of life, as they celebrate your good times and provide you the support that you absolutely need during your tough days. A boy from Norman, Arkansas, has reminded the world of the true meaning of friendship with his selfless and heartwarming gesture.

Tanner Wilson and Brandon Qualls, from Caddo Hills High School, were great friends. Qualls used a hand-push model wheelchair for years and struggled to get to class and long school hallways. He told KTHV, “My arms would get really tired and I would have to stop and take rests.”

However, all that changed in February 2019, when he received an unexpected gift from Wilson—an electric wheelchair that Qualls had only dreamed of.

“It’s been my dream to just have one of these,” Qualls said. “And he made my dream come true.”

Wilson saw his friend struggle day in and day out and knew exactly what he needed for a long time but didn’t have the funds to buy a new wheelchair. His mother, Colleen Carmack, told Inside Edition that “he kept asking me to help him buy one.”

“I know they’re not cheap,” she further added. Wilson then started to work part-time in a small mechanic shop and raised the money month by month, putting aside whatever he could for two years and finally gifted Qualls the electric wheelchair he needed.

However, Wilson’s mom wasn’t at all taken aback by her son’s incredible sense of dedication. “He’s always been about everybody else and not himself,” she explained to CNN. The act also helped give the altruistic youngster a sense of purpose and drive to achieve his personal goals. “[H]im being able to help somebody else has really brought him out—being able to know that he made a difference,” Carmack shared.

Teachers at Caddo Hills High School were impressed by Wilson’s gesture, and one of them took it upon herself to customize the wheelchair. Ginger Wray told KTHV that she offered her decorating services to help make the chair even more special. She said, “‘Brandon, you got to have some flames on there because you’re going to be buzzing down these halls in no time!’ So I went home and made him some flames.” Qualls’s chair was also decked out in his favorite color.

While Qualls was entirely blown away by the gift, he recognized it as part of his friend’s personality. “Every single day, he helps anybody,” an emotional Qualls told KARK. “He’s an amazing friend.”

The story of the wheelchair and their friendship soon went viral, catching the attention of Governor Asa Hutchinson. In a Facebook post from April 2019, the governor, who met the two boys, called the gift “an incredible act of kindness & example of a true friend.”

After Wilson got Qualls the wheelchair he needed, the next step was to help his family get a vehicle that could accommodate it. A GoFundMe campaign organized by Qualls’s aunt, Susan Qualls Rollins, raised over $1,000 toward this.

In May 2019 when the two graduated from high school, Qualls was seen in his electric wheelchair.

With his compassionate gesture, Wilson wanted to impart to his classmates a real lesson—to think of others’ needs first. “There’s many people out here that have troubles and need a little bit of help,” the young boy told KTHV. “Sometimes they can’t do it for themselves.”

“I feel like life is a little too short to, you know, be judging everybody and you should think more of others than just yourself,” Wilson told KARK.