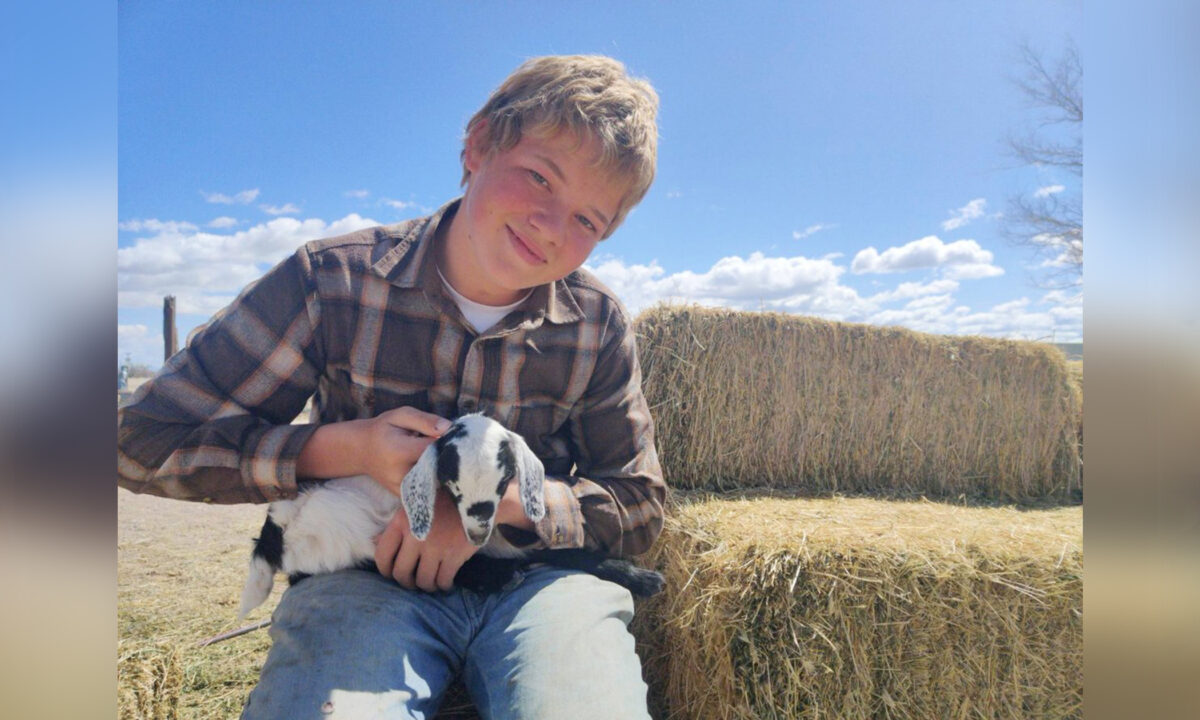 Teen Prodigy Started His Own Business at Age 7, Penned His Autobiography While Homeschooling Himself

'Accepting the idea that he was incapable because he was a kid was never an option to him.'
BY Louise Chambers TIMEJuly 6, 2022 PRINT

A late Utah teen entrepreneur and environmentalist, who homeschooled himself, penned an autobiography at the tender age of 14 to tell the story of his short but extraordinary journey, and many have since called him a prodigy.

At the age of 6, Kevin Cooper—who chose the pseudonym Cole Summers—was fixing vehicles on his parents’ farm in Beryl, Utah. Both of them are homebound as Cole’s mother is partially sighted, and his father is a U.S. veteran who uses a wheelchair.

Cole started his own business breeding and selling rabbits a year later. By the age of 11, he had already registered a truck in his own name, renovated and sold a house, was paying his own taxes, bought a farmstead eventually spanning 350 acres on which to raise goats and turkeys, and a tractor.

“Early on he was driven by wanting to achieve big things, and prove to himself he was capable,” Cole’s mom, Tina Cooper, told The Epoch Times. “Accepting the idea that he was incapable because he was a kid was never an option to him.”

Before long, Cole was homeschooling himself. He explained in his own words, in an essay for journalist Bari Weiss’s Common Sense, that he had been part of a “side movement” within homeschooling, known as unschooling, since he was 6 years old.

“Unschooling is simple,” he wrote; “the kid chooses what to learn, when to learn it, and at what pace. For some kids like me, it provides a level of freedom that many adults don’t even enjoy. When I took control of my education, my parents only had one rule: I had to do at least some of my learning by reading. Everything else was up to me.”

During his middle school years, Cole studied environmental science, learning about his Utah region’s geologic and geographic features and how the oceans and mountains impact its rainfall, and the future environmental plans that the local government had made to deal with aquifer depletion.

“My lesson about aquifer depletion started the hard way,” he recounted. “My family’s water well went dry, forcing us to haul water from a neighbor’s house for nine months while we struggled to afford a new well.”

An admirer of Warren Buffett, Cole then planned to use his keen business sense to combat water scarcity during his high school years.

Cole had gone so far as to read the official plan to deal with aquifer depletion in his area. He found that, by the time he would get old and raise his own family, average families in the area wouldn’t be able to afford access to water. He realized that the plan had left a legal opening for a more creative and less destructive option, and he then decided to make the less destructive option a reality.

He strongly believed that his peers, despite being told they were “just kids” by some parents and educators, were equally capable of enacting change.

Sadly, Cole never had the chance to realize his goal. Tragically, on June 11, 2022, the 14-year-old boy lost his life while kayaking in Utah’s Newcastle Reservoir with his older brother, who has autism.

Cole was already a sensation before he died. He was active and outspoken on Twitter, wrote prolifically about his education, and penned an autobiography, “Don’t Tell Me I Can’t: An Ambitious Homeschooler’s Journey.” It was released a month before he died.

“He was always subtle in person about his achievements,” Tina told The Epoch Times. “As a Christian, he took the command not to boast seriously.”

His mother also said that a few neighbors had realized the scale of what the teen was doing offline, but he chose mostly to just be quiet about it.

“It was when he got involved with homeschool Twitter that he found his inspirational voice to share and encourage others,” Tina added.

Among others, Cole’s work had also caught the attention of blogger and education coach Willow Liana, who first reached out to Cole after noticing him on Twitter in March.

Cole had told her that he was working on a movie at that time to raise funds to combat an environmental crisis where he lived. Hearing him, Willow was curious to know more and told him to reach out to her whenever he needed any help with anything. Two weeks from that day, he reached out to her about completing his autobiography and wanted her to give it a read.

“It left me reeling, feeling like I was flying,” Willow wrote of the teen’s autobiography, which she claims to have read in one sitting. “It busted apart all my ingrained expectations about what people are capable of.”

Yet Cole, who didn’t want “patronizing purchases” of his book, was reluctant to speak of it to his local community; he wanted to earn every sale “organically through online influence.” Readers, said his mother, have overwhelmingly hailed her son as an inspiration and his death a loss for humanity.

Despite Cole having been busy with multiple projects on his hands at the same time, Tina remembers her son to be happy and playful.

“No matter what he was doing, he made it fun,” she said. “He would get his latest favorite song in his head and dance while working on whatever his current projects were. We have videos of him dancing in place while running his tractor, and dancing while shoveling gravel out of a truck bed. He never viewed the projects he took on as work.”

Cole, who would watch various business people talk about their achievements on YouTube during his free time, had plans for his future. Apart from taking care of his autistic brother, who was three years older than him, he wrote in his book: “I want to raise my own kids here one day. I want my kids to enjoy watching the wild rabbits, deer, and pronghorn that live here. I want them to look forward to seeing bald eagles migrate in and live here every winter, just like I do.”

Since Cole’s passing, a neighbor and friend, Stefanie Whitelaw, has set up a GoFundMe page to help the grieving Coopers pay for Cole’s funeral and support their surviving son.

According to an update from the Coopers family on June 28, they are working to publish Cole’s book of 10 short children’s stories, which he’d written to teach other kids his favorite financial and business skills.

Although it’s a huge challenge to continue Cole’s environmental work, they haven’t given up and state they’re working on that too. But they have decided to sell his ranch, as it’s more than what they have been able to handle currently. According to them, they hope to find a buyer that will see Cole’s principles carried on.

Throughout his 14 years on Earth, Cole was living proof of what an autonomous teen with a dream is truly capable of. While his life came to an end prematurely, his mother knows that the support he still garners, and the thousands-strong online community he created, show that his light still shines bright.

“That’s our biggest source of strength as we work on making sure our other son’s special needs are met, and try to carry on Kevin’s legacy in the best way we can,” she said.