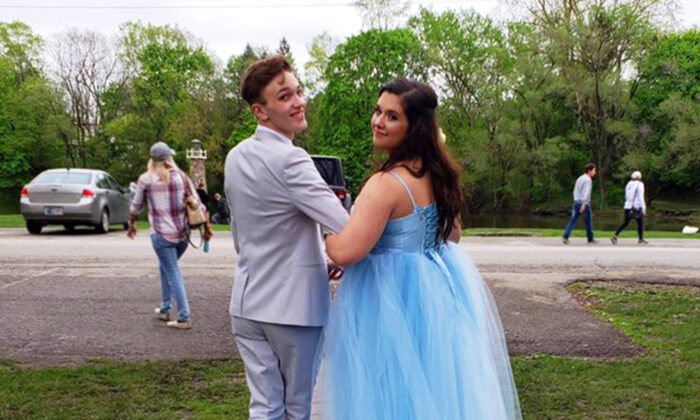 Teen Makes Prom Gown From Scratch for Best Friend Who Can’t Afford Dream Dress, and It Lands Him a Job

For Indianapolis teenager Addi Rust, prom was coming up and she had a big problem: what to wear for the big day? The senior already had a date, her best friend and junior Parker Smith. But she didn’t have the money for the kind of dress she wanted, as some dresses can run up to as much as $600.

One night when Addi and Parker were hanging out, she showed him the dress of her dreams, which was way out of her price range, and joked about him making it for her. Though Parker had no prior sewing experience, the idea enchanted him.

“That night, my thoughts stirred and the next morning I told her, ‘You know what? I think I actually can make your prom dress!’” he explained to WOFL. Given his longstanding interest in musical theater and the props, set designs, and costumes that go with it, it was Parker’s chance to shine.

When Parker set out on his mission to make the perfect dress for his best friend, he didn’t have much of an idea of where to start. As he explained to WXIN, “I had only sewed two stitches before I did it. Every big moment out of it, we were just having fun.”

Thankfully, he had years of admiring and researching others’ designs, which gave him lots of resources when it came to Addi’s prom dress. As for Addi, knowing her friend the way she does, there wasn’t a shred of doubt. “I trusted that Parker would make it stunning and wouldn’t let me go to prom in something that was anything less than perfect. I was right!”

In addition to all the resources available on the internet, Parker also had the wisdom and experience offered by his grandmother, Lori Kean, to rely on in his quest to make the spaghetti-strap light-blue gown. “I’m so glad I learned a few lessons from her, as well as had a few good laughs,” he shared.

Parker started out in January 2019 and needed all the time he could get to make the dress perfect just in time for prom. In fact, he worked until midnight on the day before the big event. “I’m such a perfectionist that I was up adding more stones to the dress even the night before prom,” he said to WXIN. Some of these last-minute accents included rhinestones around the neck and a lace-up section in the back to make it extra fancy.

On prom day, Addi was overwhelmed by what her “BFF” had done for her. “Seeing the finished dress that morning before prom was like a movie,” she said. “I couldn’t believe my best friend made it!” But it wasn’t just Addi who was impressed by the dress; people in their school and all over the internet found out about the story and were equally impressed.

People were so impressed that Smith even found himself invited into the career he’d always dreamed of. When the director of an Indianopolis production of the musical “Cinderella” was coming together, director Bob Harbin asked around for a costume designer who could make the dress to fit the princess. One of Smith’s teachers recommended him to the theater company, and the rest is history. Harbin told WXIN, “When you see the work, his sketches, the guy’s got it or the guy doesn’t, and he’s definitely talented.”

Having made the perfect gown for his very own belle of the ball, it wasn’t too much of a stretch to make one for Cinderella. His design includes a magical transformation from peasant to princess, all in one dress. “Through a series of tabs, spinning, and a magical actress, [simple] can turn into [beautiful],” he explained. With his career well on its way at the tender age of 18, it looks as though Smith will have a bright future.