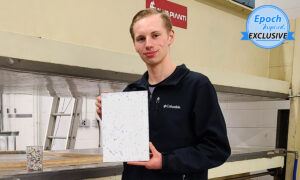 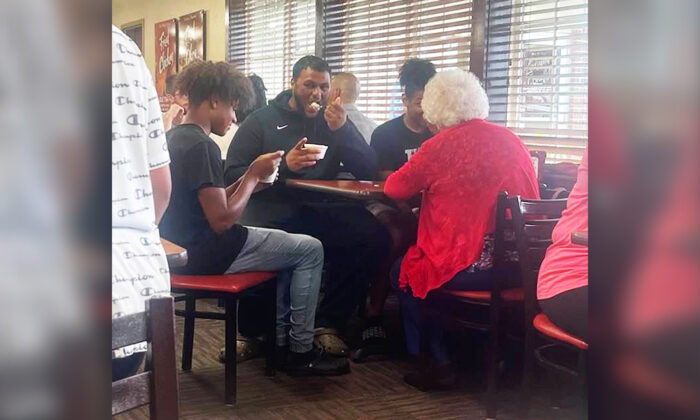 Teen Brothers Join Lone, Elderly Diner at Her Restaurant Table: ‘She Was Delighted’

An elderly woman eating lunch alone at a restaurant on Father’s Day was initially shocked when three teenage brothers asked to join her. Yet her shock turned into joy and gratitude when she discovered the siblings wanted to learn about her life, talk about God, and spread a little love.

“When they saw this woman at the table alone, they couldn’t help but to think that this woman may have been someone’s grandmother,” the brothers’ mom, Courtney Hendrix, told The Epoch Times via email. “Having lost their own grandmother in February of this year, the boys have spent some time thinking about their favorite memories with her.”

Jaylin, 18, Christian, 17, and Jordan, 14, hoped that someone would reach out to the lonely diner at the Ole Times eatery. When nobody did, they took it upon themselves to fill the three empty seats at her table. They later learned that the woman’s name was Shelby Garrett, and the 83-year-old woman had recently moved to their blended family’s hometown of Warner Robins, Georgia.

“Initially she seemed a bit shocked,” Courtney recalled. “However, that was quickly replaced with gratitude and sheer joy. She was delighted to have them join her.”

However, neither Courtney, a nurse, nor her partner James Watson, an aircraft sheet metal mechanic, were surprised by their sons’ gesture. Courtney maintained that her children have always been taught to have compassion for others.

The proud parents snapped photos of their boys with Garrett, and Courtney even shared them on Facebook. “They talked over peach cobbler and ice cream,” she wrote. “They talked about God. She asked them about their lives and their goals.”

The elderly woman also turned to Courtney and James and told them how delighted she was to sit with their children.

Courtney’s post was shared thousands of times, eventually reaching Garrett’s family, who then got in touch with her and shared more photos and information about their loved one. Garrett, they said, was the fourth born of nine children. After willingly taking on responsibility for the care of her parents, she never married nor had children of her own.

Courtney and her family never expected their story to go viral, but are delighted by the positivity it has sparked. The mom of four hopes that others are inspired to take a moment every now and then to think of someone else.

Reflecting back on the incident, Courtney said that faith has taught her family the importance of treating others with love, respect, and dignity.

“We don’t have a philosophy when it comes to raising kids,” she told The Epoch Times. “We have just tried to raise them to be the best human beings that they can possibly be.”

This story was last updated in July 2021.