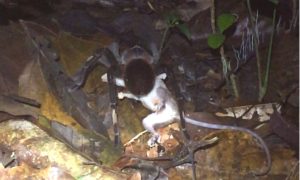 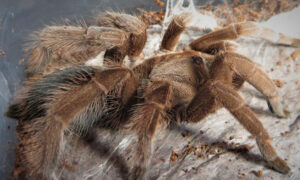 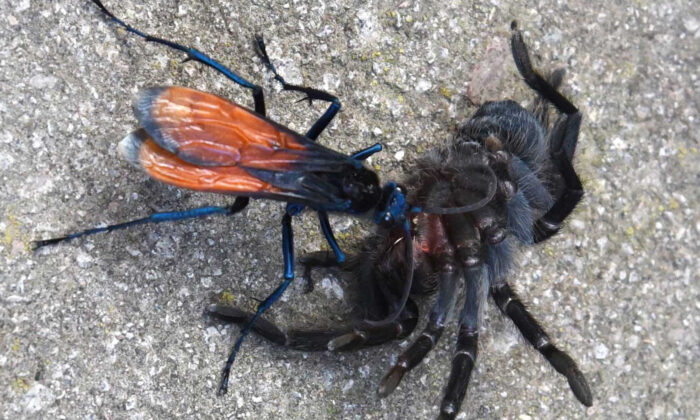 She usually won’t sting you unless provoked, but if she does, you’ll probably wish she hadn’t.

Unlike the name suggests, the tarantula hawk, Pepsis grossa, is neither a spider nor a bird. It is a wasp that gets its name because of the prey females of the species are known for hunting down and carrying off to their burrow: tarantulas.

Her sting is also known to be the second most painful bug sting in the world.

This species of wasp, native to the deserts of New Mexico but ubiquitous on many continents, is also the largest wasp in the world, growing as long as 2 inches and sporting metallic blue-black bodies and brilliant orange-amber-hued wings.

Although named for the hairy eight-legged prey they hunt, both males and females also consume flower nectar, particularly fragrant milkweed blossoms, as well as fermented fruit, according to New Mexico Magazine.

Yet, it is their quarter-inch-long barbed stinger that concerns humans the most. Although the wasp is generally considered docile, and has been dubbed a “gentle giant,” they will sting on provocation, and by many accounts, it’s far from a pleasant experience.

U.S. entomologist Justin Schmidt, who invented the insect “sting pain index,” ranked the tarantula hawk as a four—the highest score on the scale. The wasp’s sting is ranked second only on the pain index to that of the bullet ant of the Central and South American rainforests, which earns a “four-plus” on the scale.

Yet, it is the index’s qualitative description that makes the biggest impression. Schmidt has described the tarantula hawk’s sting as “instantaneous, electrifying, and totally debilitating,” according to New Mexico Magazine.

“To me, the pain is like an electric wand that hits you, inducing an immediate, excruciating pain that simply shuts down one’s ability to do anything, except, perhaps, scream,” KGUN reported.

Truth be told, however, tarantulas get it far worse.

Female wasps, with their sharp hooked legs and long stinger, are fully equipped to do battle with the giant spiders. A single sting from the wasp causes instant paralysis in the tarantula, which she then carries off to a burrow in the ground, which she has prepared nearby. She then lays a single egg on the spider’s body and covers up the hole, trapping it inside with the egg.

Horrifyingly, when the egg eventually hatches, the larva then punctures its way into the spider’s still immobilized body and slowly devours its insides over a period of weeks, until the new wasp is mature, at which point it emerges from the dead carcass. Not a happy ending for the tarantula.

However, the tarantula wasp is not without predators of its own to worry about. Roadrunners and bullfrogs, for example, are both able to withstand stings delivered by the wasp and make a meal out of it.

Meanwhile, male counterparts of the wasp species are far less dangerous than females. They are also much smaller, with comparatively tiny stingers, and are unable to take on the large, hairy spiders. Instead, they feast on nectar and fermented fruit, perch themselves in high places, and spend their days scoping out female mates.