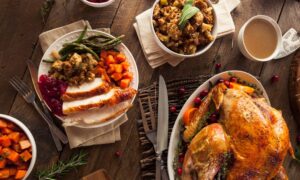 At the Thanksgiving Table, a Celebration of Abundance
0
Share Now
FacebookTweetParlerEmail
Copy Link 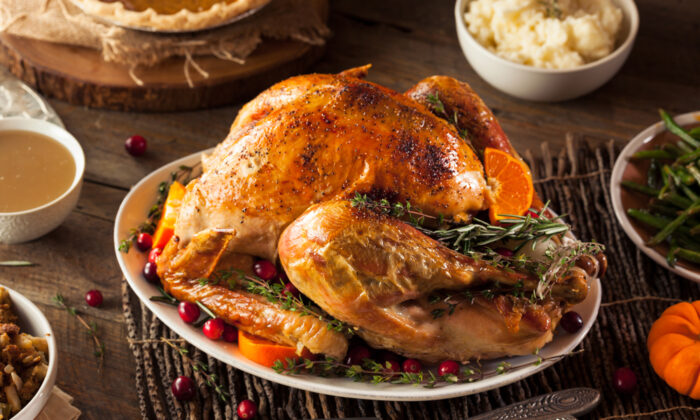 In a year of uncertainty and change, there’s one thing we can count on as the holidays draw near: Thanksgiving turkey. There’s comfort in tradition—especially if it’s in the form of a beautifully bronzed bird at the center of the table, gleaming with crisp, crackling skin and tender, juicy meat.

But in reality, the road to roast turkey is fraught with potential mishaps and missteps, ending in dreaded dry, stringy meat. To guide you to guaranteed turkey success this year, we asked professional chefs around the country for their best turkey-cooking tips and advice. Here’s what they said.

As a rule of thumb, plan for about a pound of turkey per person, or a pound and a half to make sure you have enough leftovers for the next day (or week). And keep in mind that when it comes to turkey, bigger isn’t always better.

“I think that for many people, this will be the year to cook a smaller turkey,” said Bridget Lancaster, chef and TV host of “America’s Test Kitchen.” “We like birds that weigh somewhere between 12 to 14 pounds. They tend to be more tender than the super-large turkeys, and they will still feed 10 to 12 people. Or provide plenty of leftovers for my family of four.”

If you need more turkey, better to buy a second, not a bigger, bird. If you need less, consider roasting just a bone-in breast instead.

“Starting with a brined, salted, or kosher turkey will really go a long way toward keeping the turkey meat juicy and flavorful,” Lancaster said. For ease of preparation, you can buy a “basted” or “self-basting” turkey, which has already been injected with a salty solution (Butterball turkeys fall under this category), but keep in mind that these tend to be highly processed. Kosher turkeys are also salted and rinsed during processing, and don’t need further brining. If, like Lancaster, you prefer to do the brining or salting yourself (more on that below), look for a natural, untreated turkey with “turkey” as the only ingredient.

Daniel England, corporate chef of San Diego’s OMG Hospitality Group, said: “My thinking is, if you’re only going to cook turkey once a year, why not buy the best turkey you can find? So I’ll purchase an all-natural, organic, cage-free bird that was fed all-natural organic feed with no antibiotics, animal byproducts, or chemicals. My personal go-to would be Mary’s Free-Range Organic Turkeys.”

Judy Joo, a London- and New York City-based chef and cookbook author (and an Epoch Times contributor), usually opts for an organic heritage turkey—which tend to be smaller and leaner but more intense in flavor—from online meat purveyor Heritage Foods. “The taste of a heritage bird is wondrous—it actually tastes like turkey, full of flavor and naturally juicy,” Joo said. “They are a bit pricey, but if you can afford it, it is totally worth it!”

It’s hard to argue with the grandeur of a whole, gleaming bird at the center of the table, but whole-roasted turkeys are notoriously difficult to cook evenly, since the white meat cooks faster than the dark (hence that dreaded dry breast meat). If you’re willing to part with the presentation, consider these workarounds:

Joo is a fan of spatchcocking, or butterflying, the turkey, a process of removing the backbone and flattening the body before roasting.

“Spatchcocking is best for keeping your turkey moist—it cooks more evenly and takes less time, therefore leading to a juicier bird,” she said. Use a good pair of poultry shears to cut out the backbone, then flip the turkey over, splay out the legs, and press down on the breast bone until it cracks.

Brine and season as desired, then lay it out on a roasting rack over a sheet pan to roast; it’ll take half the time as a whole bird. “And if you cut up all of the pieces, it still makes for a gorgeous presentation on a pretty platter,” Joo said.

Phillip Schaaf, an Arkansas-based chef and recipe developer for Grass Roots Farmers’ Cooperative, takes it a step further: “My go-to method these days is to break down the turkey and cook each part separately. The best way to ensure moist and delicious end results is to roast the white and dark meat separately, basting often and checking internal temperatures along the way to prevent overcooking.”

He distributes the parts among separate pans to roast and adds them to the oven in intervals: first the backbone and wingtips with mirepoix, to then simmer into stock for gravy; then the leg quarters; then the breasts and wings. “It takes a little bit of timing to ensure that everything is done around the same time, but the results are definitely worth it,” he said.

Justin Dain, executive chef of PINE Restaurant in Hanover, New Hampshire, takes a similar approach in breaking down the bird, but singles out the legs for a more luxurious treatment. “I really love to confit the turkey legs submerged in duck fat with thyme, rosemary, and bay leaves for 6 hours at 275 degrees, until the leg meat is falling off the bone,” he said.

If you buy your turkey from a local butcher, you can ask them to break it down for you; or, simply buy turkey parts instead of a whole bird.

Nearly all chefs recommended brining the bird—a process of infusing the meat with salt, for better flavor and retained moisture while cooking—but were split among the two schools of brining thought: wet brining (soaking the turkey in a saltwater solution) and dry brining (rubbing the turkey directly with salt, known more simply as salting).

“The choice between the two methods is definitely up to personal preferences and there are pros and cons to each,” Lancaster said. “Brining is faster, but you have to find space in the fridge to hold the large container that holds the turkey and brine. Salting is slower, but it’s the better method for promoting crisp skin.”

Lancaster breaks down the basics of each method: “For brining, a good rule of thumb is to mix in 1/2 cup of table salt (or 1 cup of kosher salt) for every gallon of cold water that’s used to brine. So for a smaller turkey (under 17 pounds) you’d mix 2 gallons of water with 1 cup of table salt. Then let the turkey brine, refrigerated for 6 to 12 hours.

“For salting, all you need to do is gently loosen the turkey skin from the breast and leg meat and then rub the salt directly into the meat [under the skin] and inside the turkey cavity. For a 12- to 14-pound turkey, we use a 1/4 cup of kosher salt. Then the turkey is refrigerated, uncovered for 24 to 48 hours. It takes more time for the salt to penetrate the meat using this method compared to brining.”

Brine and salt rub recipes can vary, including all sorts of herbs, spices, and other aromatics. Lancaster adds sugar to her salt rub; Joo includes a bit of baking powder to help crisp up the skin. Thomas McGee, owner and head chef at Pinch Spice Market in Louisville, Kentucky, infuses his wet brine with a whole medley of aromatics, including rosemary, thyme, oregano, marjoram, sage, tarragon, roses, juniper berries, and even lavender. (He also offers a solution to the space problem: “I usually put it in a sealed bucket outside overnight (as long as it’s not freezing) because there’s usually not enough room in the fridge. Just make sure there’s no crafty coyotes around or anything.”)

In either case, before cooking, be sure to rub off any excess salt and pat completely dry.

Most chefs agreed that the stuffing—or dressing—is better on the side. “When you pack the cavity with stuffing, that can really slow down the cooking, so there’s a real danger that some areas of the turkey, or even the stuffing itself, might not reach a safe temperature for consuming,” Lancaster explained.

Instead, if you’re cooking a whole bird, stuff the cavity with aromatics that will both flavor the meat from the inside and help keep it moist—chopped onions and carrots, whole bulbs of garlic and stalks of celery, fresh herbs, a halved lemon. Chris Scott, chef at the Institute of Culinary Education, likes to use whole Granny Smith apples, “so the sweetness of the apples permeates into the bird.”

Miss the flavor of stuffing cooked in the bird? Lancaster points to a Test Kitchen recipe that calls for baking the stuffing covered with a layer of turkey wings, which “render their fat and juices into the stuffing below. The bonus is that you get to eat more turkey wings.” Alternatively, take a cue from Brandon Whitehouse, corporate executive chef for Alexandria Partners Restaurant Group in Alexandria, Virginia, and simply pour some pan drippings from the turkey (save enough for the gravy!) over the stuffing before baking.

Several chefs called for rubbing softened butter, flavored with herbs and garlic, both all over the outside of the turkey and between the skin and meat before roasting. “It’s basically a flavored basting as it cooks. It also helps the skin to crisp,” Whitehouse said. “My mom used to do it, and I just kept going.” With this addition, there’s also no need to baste during cooking, saving you time and juiciness—repeatedly opening the oven door will lower the temperature and lengthen the cooking time, increasing the risk of a dry bird.

Joo likes to brush the outside with a light coat of good-quality soy sauce, which adds flavor and gives the turkey “a great browned, caramelized skin.”

Handle the Heat (and Time)

For McGee, after years of trying to perfect his turkey-roasting skills, “everything changed” when he started using high-heat cooking. “When you cook it really hot first, you’re reducing the overall amount of time the turkey has to sit in the oven, which is good because ovens dry turkeys out,” he said.

“The turkey goes into a 500-degree oven for 30 minutes, then I reduce the heat to 350 degrees and cook until the turkey reaches between 155 to 160 degrees, which usually takes two to four hours depending on the size of the bird. When I have it out of the oven, I sprinkle it lightly with my secret ingredient—black truffle salt—and then cover it loosely with foil (think of it like tenting a turkey, not wrapping it up tight) and let it sit for at least 45 to 60 minutes.”

“Pay attention to the internal temperature of the meat, not the timing of the recipe,” Lancaster advised. “Also, don’t pay any attention to the pop-up timer that comes on some turkeys. We’ve found them to be incredibly inaccurate. Instead, a calibrated instant-read or probe thermometer will tell you when the turkey is ready to remove from the oven.”

The CDC recommends cooking turkey to a minimum internal temperature of 165 degrees F in the thickest part for safety, but most chefs suggested taking the bird out of the oven a little earlier, to prevent overcooking. Whitehouse does so when the thickest part of the breasts reaches 145. While the bird rests in a foil tent—a crucial step—carryover heat will bring the temperature up to where it needs to be.

After resting, Whitehouse also likes to remove the legs and return them to the oven until they reach 185 degrees, when “the collagen begins dissolving, and they get super tender and succulent.”

Correction: A previous version of this article misstated the ratio of salt to water in a brining solution for turkey. The ratio is 1/2 cup of table salt for every 1 gallon of cold water. The Epoch Times regrets the error.