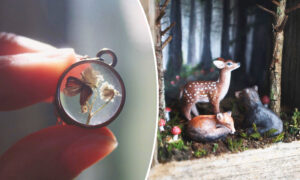 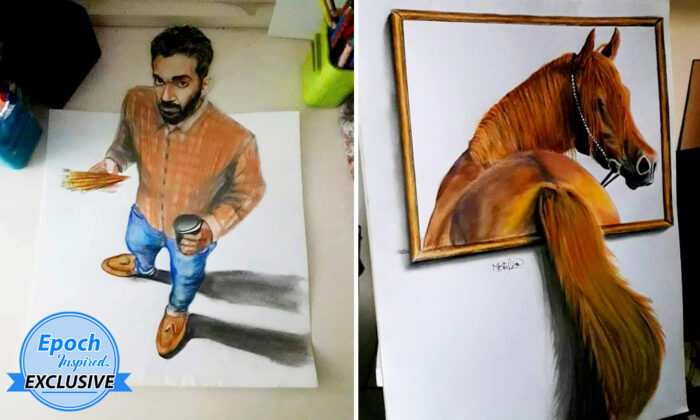 As technology is capable of rendering believable realities in three dimensions, it is no easy feat for an artist with a pen and paper in his hands to do so. Yet one man from Egypt is doing just that.

Born and raised in Alexandria, Mustafa Mohamed Samir Ragheb has loved drawing since he was a child. He now works in the field of interior design and decoration, but the incredible 3D drawings he paints in his free time have drawn a worldwide fan base.

“I always draw on top of anything or on anything,” Ragheb, 36, told The Epoch Times. “I always hold a pen in my hand, and that was what happened when I started thinking: straight away, my hand started drawing.”

Already in love with realism, Regheb’s passion increased when he discovered 3-dimensional drawing. It feels good, he says, to experience a real image “breathing in front of you.”

Ragheb shares his work on Facebook and Instagram. Collating 80 drawings into one post—including unclockable renderings of a bottle of water, a glass marble, a kettle, and sunglasses—the artist amassed hundreds of supportive comments and compliments from viewers who could barely believe their eyes.

As for what Ragheb chooses to draw, he claims he will put pen to paper for anything that excites him artistically in terms of dimension, light, and shadow, or reflections. He is particularly fond of the moon and one rendering of Earth’s natural satellite, which he says took him 33 days to complete.

As time passed and his passion intensified, Ragheb developed new ways to augment the 3D quality of his work.

“I came up with many techniques,” he explained to The Epoch Times, “including folding the paper on one side and drawing on each part individually. When we put the paper in some way, and at a certain angle, we see a real hologram.”

Additionally, Ragheb experiments with different pens and pastels, claiming the diversity of his mediums is what distinguishes his work from others and helps people recognize his work at first sight.

Some of Ragheb’s paintings are symbolic or exemplify strong feelings. One such painting, of a horse whose tail appears to hang out of the frame, conveys a powerful message, says the artist.

“The story of the painting is an abbreviation of the concepts of pride, dignity, and sincerity,” he explained. “In it, the horse left one place for another after being subjected to some injustice. He too, despite his pride, left his tail outside the frame and is still looking back; he was not able to leave them, but he is also loyal to himself, leaving his friends who wronged him.”

The artist admitted he was initially annoyed when some netizens claimed his work was too real and couldn’t possibly be drawn by hand. But he eventually realized that their incredulity was a sign of his success as a 3D artist.

Ragheb is famous in Egypt for his unique talent. He has been featured in the national press and in interviews for television. He is happy that modern technology allows him, and others, to share art with the world at the click of a button.

As for what the future holds, he hopes to have exhibitions internationally.

“Most of my fans are from all over the world,” he said, adding, “I would like to thank everyone who encourages the arts and supports art in general, as it is the truest thing you can express.”