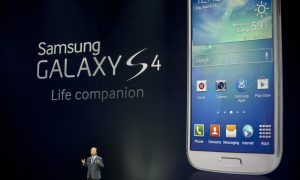 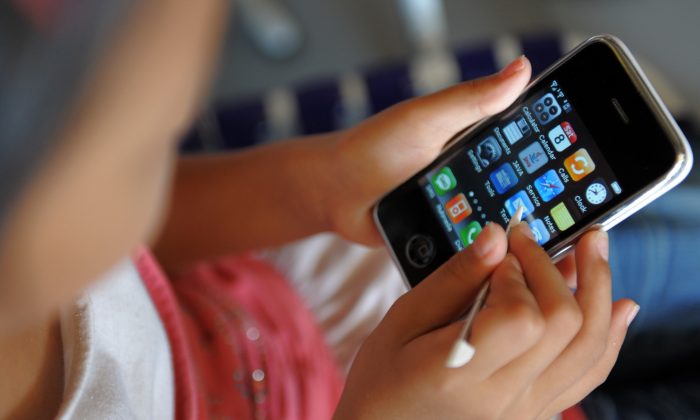 A young girl uses the touch screen of a mobile phone. Public health organizations say that young people should avoid using cellphones, because the electromagnetic radiation wireless devices emit may cause cancer. (Tang Chhin/AFP/Getty Images)
US

Squint at your cellphone manual long enough and you’ll find suggestions you might not expect—limit exposure to children, keep away from reproductive organs, operate with a wired headset.

Rep. Andrea Boland (D-Maine) says that given the evidence, the message needs to be made much clearer.

For the past four years, Boland has been working to get these cautions out of the fine print and on to the package so that people will actually read them. Maine’s Energy, Utilities and Technology
Committee held a hearing in April to consider her latest proposal.

It’s a diluted version of Boland’s original proposal, which warned consumers that their phone “may cause cancer.” Due to pressure from the wireless industry and reservations from skittish fellow lawmakers, the latest label uses only the manufacturer’s own words or those of the World Health Organization (WHO).

“It should be in blazing neon lights in front of any store selling these devices to be careful of them, to use them appropriately, and understand that they can cause a lot of different diseases,” Boland said in an interview.

When Boland first proposed a warning label in 2009, it was attacked and ridiculed. The notion that a popular technology—a fundamental part of modern culture—could be harmful was laughable, and Boland was labeled an alarmist.

“People were angry and upset and calling me crazy and stupid,” she said. “It was shocking and upsetting to a lot of people, but it got the conversation on the table.”

Once Maine started talking, the conversation quickly spread across the country. Progress, however, has been slow. Warning label legislation has since been proposed in several states, as well as at the federal level.

San Francisco is the only local area where legislation has passed, and the wireless industry swiftly defeated that measure in federal court.

In other countries the issue has been taken much more seriously. Germany, India, Finland, France, and Israel have all issued warnings, and Belgium has even banned sales and marketing of phones to children.

The head of Belgium’s largest telecom company was so convinced his brain tumor was caused by his own product he cut Wi-Fi out of his office, and now personally warns the public to exercise greater care.

Several doctors suggest a growing connection with brain cancer and wireless technology. Neurosurgeons often include questions about cellphone habits in their intakes: How often do you use your phone? On which side of the head?

Physicians for the late Sen. Ted Kennedy and attorney Johnnie Cochran reportedly believed that heavy cellphone use was the likely culprit for their tumors; and an Italian court recently ruled that one man’s tumor was caused by his job’s long hours on a mobile phone.

Despite these observations, doctors have had a hard time coming forward publicly. When Boland was recruiting experts to give testimony for her bill, she spoke with a prominent physician at the biggest hospital in the state—Dr. Rajiv D. Desai, a neurosurgeon at Maine Medical Center.

Boland said Desai was very enthusiastic at first, and eager to testify. A week later, he called to back out.

“He said that because of his leadership position at the hospital his opinion could be construed as being the opinion of the hospital,” Boland said, and the hospital was not willing to take an official position on the issue.

“So much for the Hippocratic oath,” Boland said.

In the early 1990s, the U.S. Food and Drug and Administration concluded that cellphones were safe based on microwave oven studies from decades before. Since then the agency has refused to reassess the risks despite changes in the technology.

Public health organizations have expressed more concern, especially when it comes to children. The American Academy of Environmental Medicine and American Academy of Pediatrics have both issued warnings that young people should not use wireless devices.

While some studies evaluate cellphone safety based on changes in a fluid-filled replica of a large man, others have shown that children’s smaller bodies are much more susceptible to the radiofrequency (RF) electromagnetic fields that wireless devices emit.

A child’s thinner skull allows radiation to penetrate deeper and can have a more profound effect on the vulnerable, developing brain inside. One research group in Sweden found that children using cellphones are more than five times at greater risk of brain cancer from RF fields than adults.

No one has proven that wireless devices cause cancer, but because the tumors can take decades to develop, experts say that not enough time has elapsed to conclude that they are safe.

“This has the potential to be the whole issue of cigarette smoking and lung cancer all over again,” said Dr. David Carpenter, director of the Institute for Health and the Environment at the University at Albany, SUNY, School of Public Health.

Without proof, the wireless industry is understandably resistant to allegations that its product might cause cancer, but Dr. Carpenter says it’s still very important to have direct discussions about the evidence thus far.

In 2011, the World Health Organization classified RF electromagnetic fields “as possibly carcinogenic to humans, based on an increased risk for glioma, a malignant type of brain cancer, associated with wireless phone use.”

Studies of other causes of brain cancer often show a long delay period between exposure and cancer development—often 20 to 30 years, according to Carpenter.

Cellphones are a fairly recent habit, yet researchers already see statistically significant elevations in cancer rates for those who have used their cellphone constantly for more than 10 years.

“Of course we’re extrapolating, but with every kid on the cellphone all the time, often for hours a day, in the worst case scenario we may be seeing an epidemic of brain cancer in the near future as these kids grow older and the effects of their cellphone use as a teenager manifest themselves,” he said.

Support has increased for Boland’s bill with each incarnation, yet fellow lawmakers and the Maine attorney general both fear that the powerful wireless industry will sue if the measure passes. The latest label removed words such as “warning” or “safety” to quell litigation concerns and satisfy industry demands.

Boland is hopeful that her latest proposal will pass the still somewhat skeptical Senate, but she’s clearly disappointed with the weakened wording. She says the cultural allure of wireless technology is so strong that the public requires a bold message to snap out of its delusion.

“People don’t want this to be true. They love these gadgets,” she said. “[They think] if this was really that bad the government would let us know. Well, I guess I’m the government and I’m trying to get it known.”

After listening to expert testimony, several legislators found that what once sounded crazy might actually deserve some attention. Boland says that her colleagues now keep their cellphone out of their pockets, use them less, and share the information they’ve learned with family and friends.

Boland says that while fellow lawmakers have been personally convinced, politically they are still not sure.

“They’re worried about what the industry will do to them,” she said. “Everybody is scared of this industry, and it’s like the king who has no clothes. If someone would just point out that he’s got no clothes, everybody else could relax.”